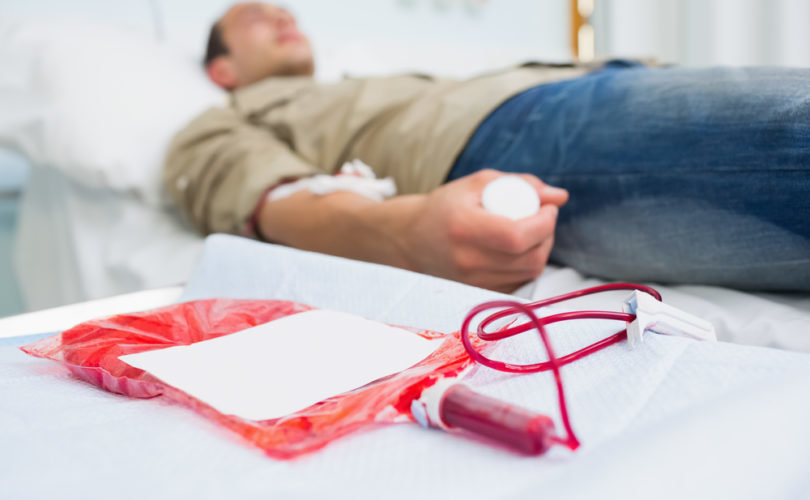 OTTAWA, October 28, 2015 (LifeSiteNews) – Among the election promises haunting the Liberals, and all Canadians, now that they have won the election, is their vow to eliminate the five-year period that men who have had sex with men must wait before donating blood.

The Liberal campaign website says the five-year wait after the last same-sex encounter (“even if it has been entirely safe and monogamous,” as the website puts it) “must end.”  The Liberals promise “to end this stigmatizing donor-screening policy and adopt one that is non-discriminatory and based on science.”

But critics say that in cozying up to gay groups and, perhaps more importantly, to the Canadian Federation of Students, the Liberal platform builders have ignored not only Canadians who suffer from blood diseases such as haemophilia, and need frequent transfusions, but an entire, well-established field of science and all who practice it, namely, epidemiology, or the study of infectious diseases.

Restrictions on blood donations from men who have sex with men (MSM) began when several thousand Canadians were infected with AIDS and other diseases through medically-required transfusions of  blood provided by the Canadian Red Cross that turned out to be contaminated. The donors were male homosexuals. Canadian men who have had sex with men are 263 times more likely to have HIV/AIDS than men who haven’t.

But this still comprises just 4.2 percent of all MSM, and since most MSM won’t donate blood, in 2013 the Canadian Blood Services decided to change its policy from one of rejection of blood donations from men who have had sex even once with another man since 1977 to men who have had sex with men in the previous five years. The gay lobby and Canadian Federation of Students on one side went along as did the Canadian Haemophiliac Society on the other, though the latter unhappily noted that the activists and CFS were merely biding their time and would not be satisfied until gender-neutral screening replaced MSM targeting.

The Liberals and homosexual activists can point to the fact that Australia and New Zealand now have one-year deferrals for MSM with no increase in AIDS/HIV infection rates. As well, countries such as Spain use gender-neutral screening questions.

But the Canadian Haemophilia Society—and Canadian Blood Services together with its Quebec counterpart Hema-Quebec—still defend the five-year wait period. They note that epidemiology indicates different countries have different infection patterns; that the United States still imposes a deferral back to 1977; and that some European countries have a lifetime donation ban for MSM.

As for Spain et al, reports the Canadian Blood Service, “It should be noted, however, that the rate of donors with HIV-positive test results in those countries is more than 10 times higher than in Canada. Studies of HIV risk have found that such an approach in Canada would substantially increase the risk of HIV per unit of blood in Canada, which is currently among the lowest in the world.”

What is more, screening using de-gendered criteria would have to spread the net so wide it would eliminate many heterosexual or lesbian donors who posed no actual risk. “Our own research,” claims the CBS, “has found that gender-neutral, behaviour-based screening would result in an excessive loss of donors and threaten the adequacy of supply.”

The CBS and the CHS also advocate the five-year wait, not to prevent AIDS-tainted blood, which testing can now catch, but to prevent CBS’s blood supply from contamination by the next, as-yet unknown disease to spread through the promiscuous population of Canada’s active male homosexuals. And because the next disease is unknown, there are also no tests to detect it—until it is too late.

But the Canadian blood collection system is caught between a rock and a hard place. The alignment of the Canadian Federation of Students with the LGBTQ lobby means that the CBS could be cut off from one of its main sources of blood, volunteer drives on Canada’s university campuses, if it doesn’t go along with gender-neutral screening.

Canadian courts have ruled that CBS’s screening is not discriminatory and that blood donation is not a right. Unphased, the Liberals have moved ahead with the promise, despite the health risk.