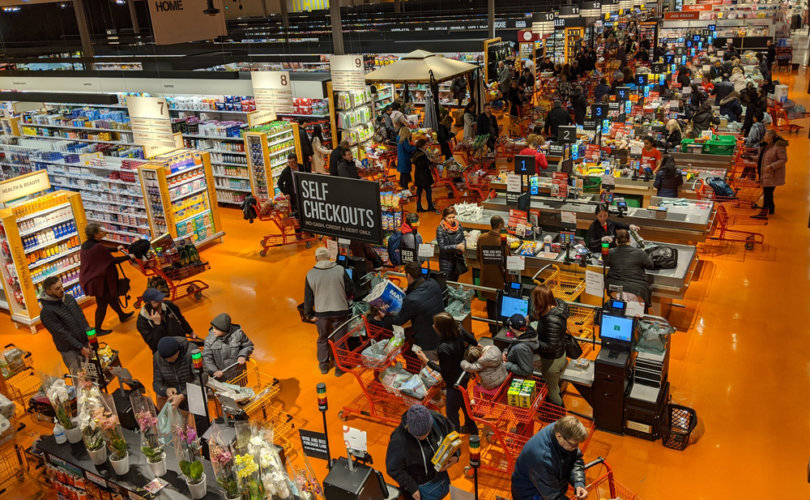 OTTAWA, Ontario (LifeSiteNews) – Canada’s inflation rate hit a 30-year high, a level not seen since 1991, fueled by massive government COVID borrowing and spending, as well as through the funding of extremist environmental programs combined with billions given to pro-abortion groups.

According to the latest Consumer Price Index Data report from Statistics Canada released January 19, compared  with this time last year, the cost for goods has risen 4.8 percent, with the highest being in the province of Prince Edward Island, which saw an astonishing 6.7 percent increase.

The costs of owning and operating a private vehicle soared 10.7 percent, with the cost of owning a household going up 14.8 percent overall.

Nationwide, the cost of meat has risen 9 percent, and dairy costs have gone up 3 percent.

The federal government under Prime Minister Justin Trudeau has been borrowing billions of dollars over the last two years to fund both its COVID programs and ideologically driven programs.

As a result, Canada’s debt has nearly doubled to approximately $1.2 trillion in the span of less than two years, from around $685 billion in 2019.

Put another way, every person in Canada would have to pay $31,000 for Canada’s debt to be erased.

In fact, in June 2021, Canada’s Parliamentary Budget Office, in its Fiscal Sustainability Report, stated that the  federal government would not be able to return to a balanced budget until 2070, during which time the country would add another $2.7 trillion in debt.

Some of the COVID projects include money going toward the spying of 33 million cell phone users, draconian COVID hotels, and billions worth in contracts for COVID jabs from pharmaceutical giants, which are planned for years to come.

One recent example of government waste as noted by Blacklock’s Reporter was that Canada’s Treasury Board cannot account for or explain where $82 million went in funds that were to go toward coercing those who were not jabbed in the public service to submit to the injections.

Conservative Party of Canada (CPC) MP Pierre Poilievre, who also serves as the party finance critic, has been calling out the Trudeau Liberals for months regarding money printing and inflation.

“Trudeau’s record-breaking deficits and tax hikes on fuel and wages are inflating prices. His government must tell us what it will do today to reverse the rising cost of living.#JustinFlation,” tweeted Poilievre on Wednesday.

As for Trudeau, he recently said the “inflation challenge the world is facing right now is a global challenge,” and that Canada’s increase is not due to massive COVID spending carbon taxes or government program spending.

“We have the third biggest reserves of oil on planet Earth. In other words, the biggest increases for consumer products have been those that we source right here at home, not those that depend on foreign supply chains,” Poilievre said yesterday at a press conference.

“Justin Trudeau’s half-trillion dollars of new spending in the last two years, a third of which had nothing to do with COVID, have sent more dollars chasing fewer goods. His taxes on our domestic supply chains have made it more expensive for farmers to produce food, for energy companies to supply a gas and home heating, for workers to work.”

As for CPC leader Erin O’Toole, he said yesterday in a statement that “the high-tax, high-debt lockdown agenda of the Trudeau government has set the stage for inflation and COVID policies are making supply chain challenges worse.”

Maxime Bernier, the leader of the People’s Party of Canada who has been a vocal opponent of COVID lockdowns and vaccine mandates, was more blunt in his assessment of the inflation situation in Canada.

“Inflation keeps rising. And for this we have to thank Trudeau, Freeland, and the @bankofcanada’s incompetent apparatchiks who printed hundreds of billions to fund the Liberals’ gigantic deficits. You will pay for it,” Bernier tweeted Wednesday.

The new policy has already resulted in both driver shortages and food supply issues, which will no doubt drive up inflation further.

Billions being spent to fund pro-abortion programs and LGBT ideology

The Trudeau government has been spending, or plans to spend, massive amounts of money in the coming years to promote the LBGT community and fund pro-abortion groups.

In February 2021, the Canadian government said it would give $15 million worth of grants to 76 different community groups, which was to only be spent on various LGBT interests in the name of “equality.”

Under Trudeau as well, the government has been subsidizing abortion groups while at the same  time stripping  Christian organizations of funding.

Overall, Trudeau has pledged Canada would spend no less $7.1 billion until at least 2030 to promote abortion and fund programs for “sexual health and reproductive rights.”

Indeed, just recently, Trudeau ordered his finance minister to go after the charitable tax status of pro-life groups and  churches.

Since Canada first started allowing the experimental abortion-tainted COVID jabs to be injected into Canadians, Trudeau has made vaccines and mandates his only public agenda, never addressing the rising cost of goods.

In September, Canadian Prime Minister Justin Trudeau, during a TV interview that has since gone viral, called Canadians who have chosen to not get the experimental COVID-19 jabs “extremists,” “racists,” and “misogynists” who deny science.

Effective from December 1, the federal government under Trudeau enacted a policy banning Canadians over 12 who have chosen not to get the shots from traveling by air, sea, or train.