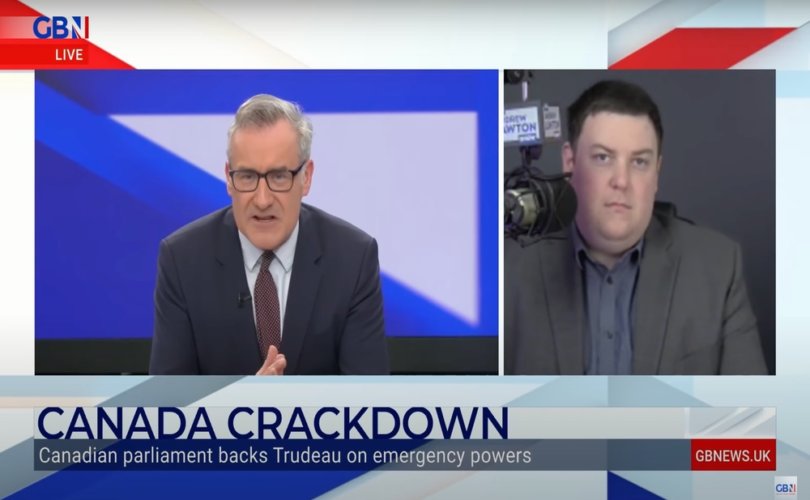 (LifeSiteNews) — Independent conservative Canadian news site True North has announced it plans to sue the Ottawa Police after one of their journalists was allegedly pepper-sprayed by officers while covering the crackdown on Trucker Convoy protestors in the country’s capital city.

In a February 18 tweet, True North journalist Andrew Lawton, host of the Andrew Lawton Show, said he had been pepper-sprayed by police officers despite being “several feet away from their front line” and having “obeyed every order to move back.”

Police just pepper sprayed me. I was several feet away from their front line and had obeyed every order to move back. pic.twitter.com/A43nQNEvDI

In another tweet posted Friday, fellow True North journalist Candice Malcolm announced that the independent news agency had hired a lawyer and would commence legal action against the police “for assault and targeting a working journalist.”

Addressing her comments to Canadian Prime Minister Justin Trudeau, who has generated widespread disapproval on both sides of the political aisle for invoking the controversial Emergencies Act against the peaceful Freedom Convoy truckers, Malcolm added, “you don’t get to beat up journalists in this country. See you in court.”

The news comes as Rebel News director Ezra Levant announced that his conservative news agency would file legal action against the police as well after female reporter Alexa Lavoie was beaten by officers and shot with a tear gas canister at point-blank range.

4. I have spoken with Alexa and with legal counsel. We will sue the police on Alexa’s behalf.

I know the rest of the Media Party is delighting at Trudeau’s brutality and martial law. But we still believe in peace and freedom.

Ottawa Police have downplayed officers’ actions during the crackdown on Freedom Convoy protestors over the weekend.

In a February 19 tweet the Ottawa Police said their officers did not use tear gas against protestors, despite video and photographic evidence to the contrary, then later acknowledged they used a “chemical irritant” against individuals whom they asserted were being “aggressive and assaultive on officers” and “refusing to comply with the orders to move.”

Meanwhile Trudeau’s invocation of the Emergencies Act, coupled with the actions of the Ottawa Police, have drawn international outcry.

Supporters of the Trucker Convoy have compared Trudeau’s crackdown to the infamous 1989 Tiananmen Square student protest in Beijing, China, in which Chinese Communist troops fired upon protestors.

Make no mistake; this is Canada’s Tiananmen Square moment.