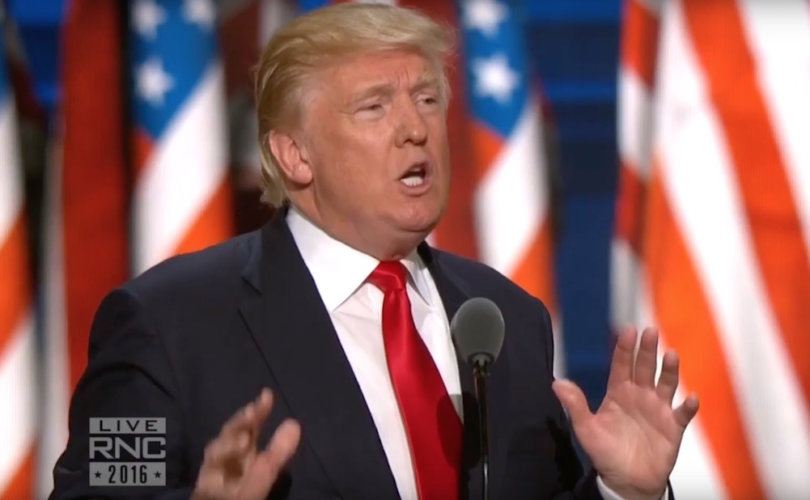 Rehearsing a litany of police murders and terrorist attacks, at home and abroad, Trump recounted how Islamic terrorist Omar Mateen “targeted our LGBTQ community,” pausing for some time between the letters “T” and “Q.” According to multiple sources, Mateen was a homosexual.

“As your president, I will do everything in my power to protect our LGBTQ citizens from the violence and oppression of a hateful foreign ideology,” he said, reiterating a promise he made in the wake of the shooting.

“I must say, as a Republican, it is so nice to hear you cheering for what I just said,” he added. Neither that line, nor the addition of the letter “Q” was in the text of his prepared remarks.

The term LGBTQ, a retooling of the more familiar LGBT, includes those who identify as “queer” or “questioning.” Those people see their sexual preference and gender identity as an ever-changing and fluid continuum that lies outside the traditional binaries of “gay or straight” and “male or female.”

Although Democratic candidates for years have referred to homosexuals and, more recently, transgender people, the rhetorical embrace of a new class of people who believe their gender is not part of any traditional category is an historic first.

“We witnessed a total transformation of the GOP tonight,” Angelo said last night. “No turning back now.”

The 2016 RNC became the first Republican convention ever to hear from an openly homosexual speaker, as Paypal co-founder Peter Thiel announced, “I am proud to be gay” to a rousing ovation.

But the GOP’s new openness to sexual minorities did not mollify those on the Left. “Donald Trump and Mike Pence are now leading the most antiquated, anti-LGBTQ ticket in recent memory,” said Jay Brown, communications director of the LGBT pressure group the Human Rights Campaign, the morning after Trump’s speech. Their campaign slogan, he said, should be “Take America Backward Again.”

“I’m with you*” —@realDonaldTrump

She also bashed the 2016 Republican Party platform, widely hailed as the most pro-life in the GOP’s history, which opposes state-imposed bans on reparative therapy for minors:

The words “conversion therapy” do not appear in the document, which affirms “the right of parents to determine the proper medical treatment and therapy for their minor children.”

At one point, he thanked “the evangelical and religious community” for their strong support during the primaries.

“I'm not sure I totally deserve it,” he said.

He did, however, touch on a few concerns important to social conservatives, promising “to appoint justices to the United States Supreme Court who will uphold our laws and our Constitution.”

“The replacement for our beloved Justice Scalia will be a person of similar views and principles,” Mr. Trump said. “This will be one of the most important issues decided by this election.” Vice Presidential candidate Mike Pence made a similar pitch in his speech on Wednesday night.

He also vowed to repeal an IRS regulation that prevents churches and some nonprofits from formally endorsing a candidate for office.

At 75 minutes, Trump’s speech was the longest since at least 1972, according to C-SPAN – longer than both Mitt Romney and Barack Obama’s 2012 speeches combined. The previous record holder, Bill Clinton’s 1996 acceptance speech, clocked in at 64 minutes.

Mr. Trump also gave the first Republican presidential acceptance speech in 36 years not to mention abortion in any way, shape, or form.