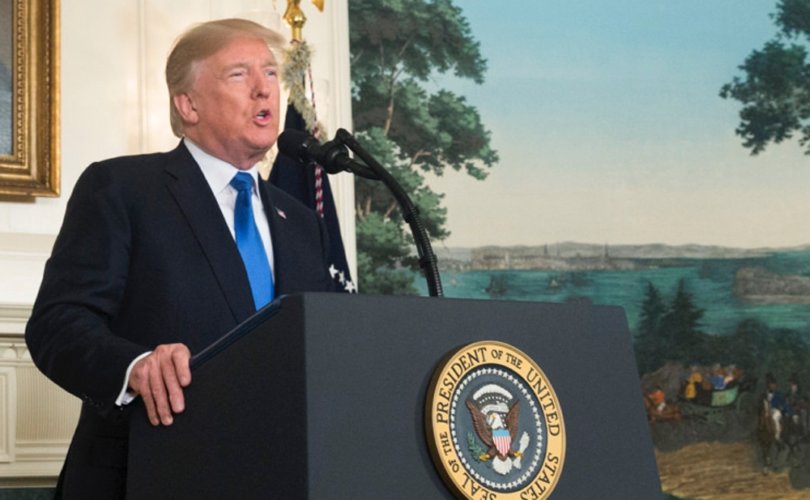 January 31, 2019 (LifeSiteNews) – President Donald Trump has weighed in on the uproar over a radical pro-abortion law briefly introduced in Virginia, declaring that it reflects the current values of the broader Democrat Party.

Video went viral this week from a subcommittee hearing in which Democrat Del. Kathy Tran takes questions about her bill to repeal any restrictions and regulations on late-term abortions. Republican Del. Todd Gilbert asked how late in the third trimester a physician could perform an abortion and whether that includes when the mother “has physical signs that she is about to give birth.”

“I don't think we have a limit in the bill […] my bill would allow that, yes,” Tran answered. In a radio interview, Virginia’s Democrat Gov. Ralph Northam also discussed the bill, suggesting that a born-alive “infant would be resuscitated if that’s what the mother and the family desired.” He later claimed he was only referring to cases such as a “nonviable pregnancy” or “severe fetal abnormalities.”

Tran’s bill has already been tabled in committee, but the controversy – and the mainstream media’s defensive coverage of it – has sparked a discussion of the extremes to which Democrats and their allies have settled on abortion.

Trump’s tweet echoes sentiments he expressed in an interview Wednesday with the Daily Caller. “I thought it was terrible,” he said of Tran’s comments. “Do you remember when I said Hillary Clinton was willing to rip the baby out of the womb? That’s what it is, that’s what they’re doing, it’s terrible.” Trump was referring to his challenge to the Democrat nominee in 2016’s third presidential debate.

“This is going to lift up the whole pro-life movement like maybe it’s never been lifted up before,” the president predicted. “The pro-life movement is very much a 50-50, it’s a very 50-50 issue, actually it’s gained a point or two over the years.” Polls consistently show most Americans want abortion far more restricted than the status quo and what the Democrat platform calls for.