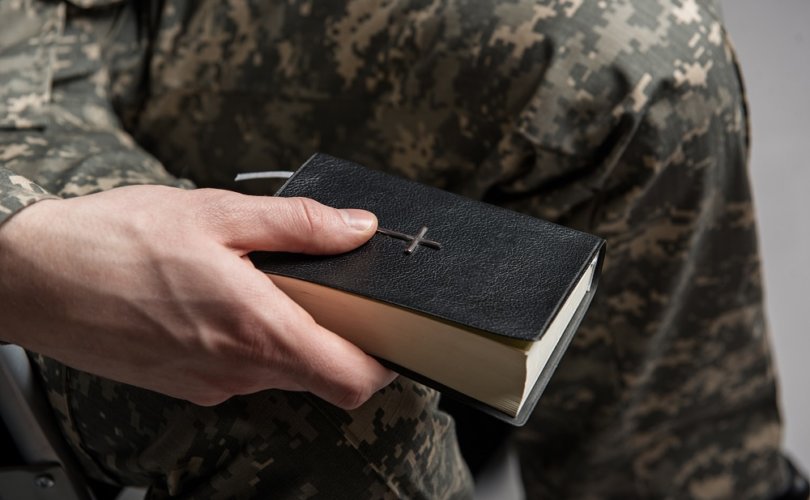 “One of my fondest memories growing up, we used to sing Christmas carols at the VA hospital in Fayetteville, North Carolina,” Wilkie told The Daily Signal, sitting in a 10th-floor office at VA headquarters on Vermont Avenue Northwest, overlooking the White House.

“Something as simple and as decent as that was being stopped,” he said. “With the support of the president, we just said enough is enough.”

Wilkie grew up at Fort Bragg, the son of an Army artillery commander. He himself served in both the Navy and Air Force reserves, and as a Pentagon official.

Since becoming VA secretary a little more than a year ago, he has returned to North Carolina.

“I was in my hometown. We have a beautiful chapel in the old VA hospital. And I walked in and there were no Bibles,” the secretary said. “It had been stripped of the symbols of religion.”

Generally, the VA had inconsistent policies across the country.

Officials designed the changes to protect the religious freedom of veterans and their families.

The new guidelines, which went into effect last month, referred to the recent Supreme Court ruling allowing a cross-shaped memorial to World War I dead to continue standing on public land in Bladensburg, Maryland.

The high court's decision highlighted the important role that religious symbols play in the lives of Americans and their consistency with constitutional principles.

“The military culture has been part of my being, an important part of what I believe,” Wilkie told The Daily Signal. “I've seen the effects of combat, both in uniform and out of uniform.”

Now, moving over to VA, I consider the spiritual well-being of our veterans, their spiritual health, to be just as important as the medical competence and technical competence of our doctors and nurses. They should have that fundamental right available to them to access chaplains, to access their Bibles.

The new guidelines call for “inclusion in appropriate circumstances of religious content in publicly accessible displays at VA facilities,” and allow “patients and their guests to request and be provided religious literature, symbols and sacred texts during visits to VA chapels and during their treatment at VA.”

The guidelines also allow the VA to accept donations of religious literature, cards, and symbols at its facilities, and to distribute them to VA patrons “under appropriate circumstances.”

“Under the old regime, you couldn't have those outward symbols,” Wilkie said. “You could not have religious texts in the chapels unless you brought them. The chaplains could not walk the halls seeking people to talk with. There had to be a specific request.”

The allowed literature may include the Bible, the Quran, the Talmud, or any other religious text, VA officials noted.

“The VA's actions undermine our Constitution, which intentionally establishes a secular government in order to preserve religious freedom, a right enjoyed by individuals,” Sam Grover, associate counsel for the Freedom From Religion Foundation, wrote in a letter to Wilkie objecting to the standards.

“Were the VA truly concerned about protecting the religious freedom of veterans, it could simply do what the Constitution prescribes and keep its facilities free from government-endorsed religion,” Grover wrote.

Wilkie said he doesn't anticipate litigation over the policy because it is based on the recent Supreme Court ruling.

“What Justice [Neil] Gorsuch said in the Maryland cross case was absolutely on target,” Wilkie said. “Because you might be offended doesn't give you standing to stop other people from worshiping. For me, this is not only a military issue. It's a religious liberty issue, and one that is vitally important to those we serve.”

The high court's ruling should reaffirm the VA's policy, said Emilie Kao, director of the DeVos Center for Religion and Civil Society at The Heritage Foundation.

“On the heels of the Supreme Court's 7-2 decision that reaffirmed the Constitution's protection of the tradition of public displays of religious monuments, symbols, and practices, the U.S. Department of Veterans Affairs took a much-needed step to clarify that religious symbols as well as spiritual and pastoral care are welcome at VA facilities,” Kao told The Daily Signal.

“Millions of soldiers from different religious backgrounds have relied upon their faith and gained encouragement from religious literature, symbols, and displays,” Kao continued. “No member of the military should have to hide their faith when they put on a uniform. Nor should our public square be devoid of religious symbols.”

In January, the Manchester Veterans Affairs Medical Center in New Hampshire removed a Bible on display at a “Missing Man” table after a secular group, the Military Religious Freedom Foundation, objected.

The Bible had been carried by a prisoner of war from World War II, but the group said some veterans had complained about its display.

After receiving new complaints about its removal, hospital officials restored the Bible the following month. In May, however, a Vietnam veteran sued to have the Bible removed.

“A Bible that was owned by a survivor in the Battle of the Bulge had to be put under lock and key because several people unknown had complained that this was an affront to them,” Wilkie said, adding:

It's incongruous to me [because] we send our young people to some pretty rough places. The notion that someone who would have been in those situations is so offended by the sight of a Bible that he wants to sue and deprive his comrades of that comfort is just beyond the pale.

In late 2015, a VA clinic in Salem, Virginia, initially blocked a Christmas tree from the premises, stating in a letter to employees that “trees have been deemed to promote the Christian religion and will not be permitted in any public areas this year.”

The clinic reversed course in late November after public pushback, and allowed the Christmas tree.

Miller also wrote that VA officials in Iowa City, Iowa, had told the American Legion not to hand out gifts if the wrapping paper said “Merry Christmas” and a VA hospital in Dallas had refused a delivery of handwritten Christmas cards from schoolchildren because they included the words “Merry Christmas” and “God Bless You.”

Such matters are important beyond individuals' freedom of religion, affecting the health of veterans in the VA's care, Wilkie said.

“The issue of Christmas carols is about simple courtesy, the ability to make people smile at a time in their lives when they are in a hospital for whatever reason, for groups to come in and spread comfort,” he said. “Emotional sustenance is absolutely something that we should be allowing, not standing in the way of.”