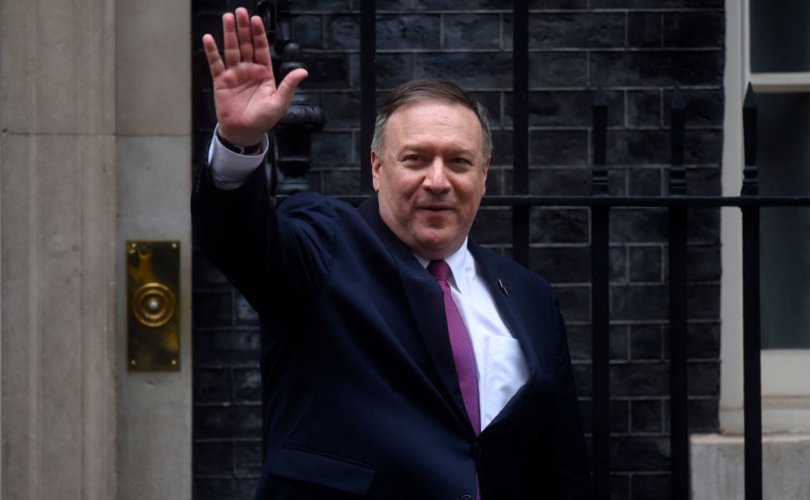 WASHINGTON, D.C., February 7, 2020 (LifeSiteNews) — The Trump administration has announced a new International Religious Freedom Alliance that joins more than two dozen countries to push for religious tolerance and an end to religious persecution.

At an event on Wednesday, secretary of state Mike Pompeo stated while country representatives listened, “Together, we say that freedom of religion or belief is not a Western ideal, but truly the bedrock of societies,” adding that it is outlined in the alliance’s Declaration of Principles and the Universal Declaration of Human Rights. “Together, we have pledged to uphold the Declaration of Principles,” a joint statement read, “solidifying our collective commitment to object and oppose, publicly and privately, all abuses or violations of religious freedom.”

Pompeo said the alliance brings together “like-minded partners who treasure, and fight for, international religious freedom for every human being.”

A State Department press release stated that this is the first international coalition ever to bring together national leaders to advance religious freedom around the world. It stated, “Egregious perpetrators of religious persecution have long operated with impunity. The Alliance will unify powerful nations and leverage their resources to stop bad actors and advocate for the persecuted, the defenseless, and the vulnerable. The threats to religious freedom are global. They require global participation and global solutions.”

Grounded in the Universal Declaration of Human Rights, the stage was set for the alliance by President Trump in his address at an event on The Global Call to Protect Religious Freedom in September. He said America “calls upon the nations of the world to end religious persecution, to stop the crimes against people of faith, release prisoners of conscience, repeal laws restricting freedom of religion and belief, protect the vulnerable, the defenseless, and the oppressed.”

The alliance, Pompeo said, includes “like-minded partners who treasure, and fight for, international religious freedom for every human being.” The chief U.S. diplomat said such a joint effort is facing a growing need to address “terrorists and violent extremists who target religious minorities, whether they are Yazidis in Iraq, Hindus in Pakistan, Christians in northeast Nigeria, or Muslims in Burma” and “the Chinese Communist Party’s hostility to all faiths.”

So far,  27 countries have joined the the United States to form the alliance: Albania, Austria, Bosnia and Herzegovina, Brazil, Bulgaria, Colombia, Croatia, the Czech Republic, Estonia, the Gambia, Georgia, Greece, Hungary, Israel, Kosovo, Latvia, Lithuania, Malta, the Netherlands, Poland, Senegal, Slovakia, Slovenia, Togo, Ukraine, and the United Kingdom. Of the countries signing up, the only Muslim-majority country is Senegal, which as of yet has been largely untouched by Muslim terrorist groups.

Notable for their absence were NATO allies France, Germany, Spain, and Turkey. Also absent were China, India, and Russia.

A senior State Department official told a press conference on Wednesday that the alliance is necessary in view of a “deterioration” in human rights over the last few decades. He said religious freedom is a “fundamental” upon which “you can really build and expand the other human rights off of.” This fundamental freedom must be prioritized, the official said, noting the continued rise of religious persecution and resulting loss of life.

According to the principles of the alliance, actions taken would be “consensual” in the sense that joint actions taken by some of the signatory countries would not bind the others to participate.

The “Declaration of Principles” offers “reactive” and “proactive” measures for the members to use to protect freedom of religion around the world.

These measures include “regular monitoring, reporting, information-sharing and outreach to impacted individuals and faith communities”; “support for victims, such as through redress, resettlement, or other actions as appropriate”; “targeted sanctions against perpetrators”; “training of law enforcement officials, building the capacity of national human rights institutions, and cooperating with civil society”; “investment in projects to protect space for civic engagement by assisting human rights defenders and victims of persecution, as well as to build societal resilience.”

Last week, U.S. ambassador-at-large for international religious freedom Sam Brownback told The Christian Post, “This is the first effort really to get a group of nations that will be the activist on a particular human right to try to champion and pursue that cause more aggressively.” He added that the U.S. looks forward to working collectively with the other nations of the alliance.

During the launch of the alliance, Pompeo also announced that Poland will host the next Ministerial to Advance Religious Freedom in Warsaw from July 14 to 16, 2020. The upcoming ministerial will be organized in cooperation with the United States and will address several topics requiring urgent response, including “improving the lives of persecuted and discriminated communities, empowering individuals to affect change, and promoting inclusive dialogue to mobilize action and increase awareness regarding the scale of persecution against religion or belief worldwide.”

Christians are the most persecuted religious group in the world, according to several organizations. In India, radicalized nationalist Hindus have murdered Christians in fiery rampages, Muslims have attacked and killed Christians in numerous countries, and China continues to persecute and imprison priests and Protestant ministers. Reports by the State Department about human rights have long noted how Christians have been targeted.

According to Open Doors USA, a nonprofit that aids persecuted Christians, more than 245 million Christians live in countries where they are subjected to serious religious persecution. Between Nov. 1, 2017, and Oct. 31, 2018, according to the organization, 4,305 Christians were killed for their faith, and 1,847 churches and Christian buildings were attacked or destroyed, while 3,150 believers were detained without trial, arrested, sentenced, or imprisoned. Among these are Catholic priests and bishops in China.

According to Aid to the Church in Need, a Catholic charity, nearly “300 million Christians around the world — or 1 out of every 7 — live in a country where they suffer some form of persecution, such as arbitrary arrest, violence, a full range of human rights violations, and even murder.”

In contrast to President Trump’s repeated denunciations of violence directed against Christians in foreign lands, and discrimination against Christians at home, House speaker Nancy Pelosi (D-Calif.) did not mention Christians when she listed religious persecutions during the annual National Prayer Breakfast on Thursday.

In her prayer for those persecuted because of their religion, Pelosi mentioned the Buddhist, Jewish, and Muslim faiths but failed to mention Christianity. Pelosi, avowedly a Catholic despite her promotion of abortion, said: “Oh, Lord, we thank all gathered at this prayer breakfast for lifting our voices for the poor and the persecuted, the millions who are missing or murdered because of their faith.”

“Let us pray for the Panchen Lama and all the Tibetan Buddhists imprisoned in China or missing for following their faith,” she said. Pelosi also prayed for the “1 to 3 million Uighurs in China forced from their homes and incarcerated in camps” and for “Raif Badawi in Saudi Arabia and for all the writers and religious freethinkers imprisoned for speaking their minds.”