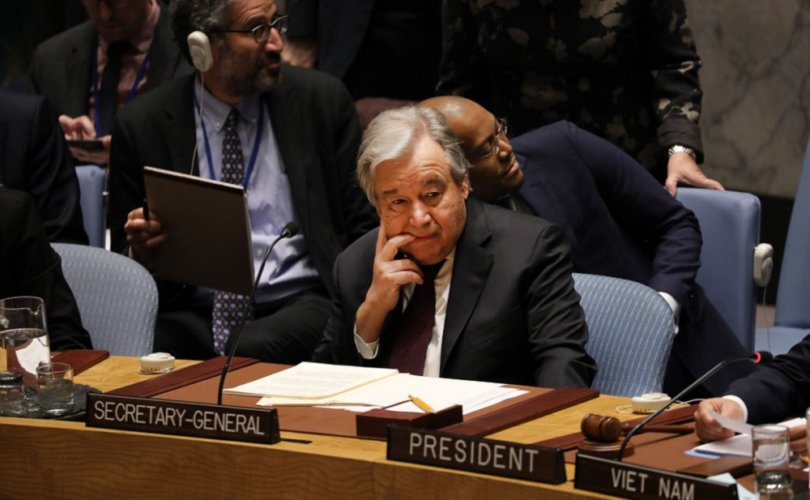 NEW YORK, June 19, 2020 (C-Fam) — The U.S. government criticized the Secretary General of the UN for promoting abortion during the COVID-19 pandemic. This occurred during an annual UN summit that oversees the UN’s work on humanitarian emergencies.

The U.S. government called the Secretary General’s promotion of abortion during the COVID-19 pandemic an “inexcusable use of a crisis to advance a policy agenda that does not enjoy Member State consensus, that is controversial, and which runs counter to U.S. policies.”

The U.S. statement to the UN Economic and Social Council is the latest salvo in an ongoing exchange between the U.S. government and the UN system about abortion since the COVID-19 pandemic began.

The Acting Administrator of the U.S. Agency for International Development, John Barsa, began the exchange with a strongly-worded letter to the UN Secretary General criticizing the UN Secretary General’s appeal for $7 billion in aid for the COVID-19 pandemic, known as “the UN Global Humanitarian Response Plan,” for including abortion as an “essential service.”

The U.S. government then blocked a resolution that would have included “sexual and reproductive health” as a “basic humanitarian need” in the work of UN agencies in emergency situations, including the COVID-19 pandemic.

Due to the ongoing shutdown of UN headquarters during the pandemic, UN resolutions can only be adopted by unanimous consensus. The U.S. government said they could not accept ambiguous language about “sexual and reproductive health.” The term has long been used by UN agencies to promote abortion.

Rather than propose a resolution without abortion related terms, the Moroccan Ambassador and Chairman of the ECOSOC humanitarian segment, Omar Hilale, opted to scrap the resolution altogether. Instead, he asked countries to join a diplomatic statement that he prepared. The United States was among the 128 delegations who supported Hilale’s statement, titled “Call to Action in support of humanitarian response in fighting the COVID-19 pandemic.”

Unlike a resolution, Hilale’s “Call to Action” is legally insignificant in the UN system. But it does endorse the UN Secretary General’s pro-abortion Global Humanitarian Response Plan to the COVID-19 Pandemic.

The U.S. statement at the ECOSOC humanitarian segment explained, “while we support efforts to support and fund a unified international response, we remain concerned with elements of the Secretary-General’s Global Humanitarian Response Plan.”

Specifically, on abortion, the U.S. statement explained, “there is no international right to abortion, nor is there any duty on the part of States to finance or facilitate abortion.”

“The United States stands ready to help those in need, but will not compromise our values, laws, and policies in the face of a crisis,” it reads.

The U.S. statement explains, “each Member State can contribute to the crisis response in a manner it sees fit pursuant to its own national laws, means, and preferences.”

“We are ready to work with the facilitators, future ECOSOC leadership, and other Member States to ensure that divisive language does not continue to undermine the overarching goal of providing life-saving humanitarian assistance,” the U.S. statement emphasizes.

The UN General Assembly is now negotiating a comprehensive resolution on the COVID-19 pandemic that will be binding on the UN system. The first draft of the resolution gave a full-throated endorsement of the UN Secretary General’s $7 billion appeal.