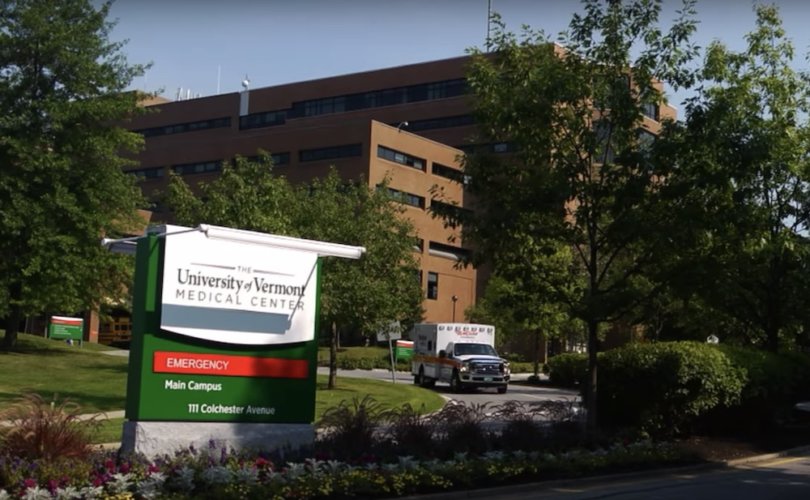 WASHINGTON, DC, August 28, 2019 (LifeSiteNews) – The Trump administration Department of Health and Human Services’s (HHS) Office for Civil Rights (OCR) announced Wednesday it has concluded the University of Vermont Medical Center (UVMMC) broke federal law by forcing a nurse to help commit an abortion against her will.

An unidentified nurse filed a conscience and religious discrimination complaint with OCR against the center in May of last year alleging that she had been forced to assist in an elective abortion, according to the HHS press release. The agency says it “repeatedly” sought cooperation from UVMMC, but it “refused” to change its policies, provide relevant documents, or produce witnesses.

From its investigation, OCR concluded that UVMMC, which began committing elective abortions in 2017, had assigned the nurse to an abortion despite knowing she had been on a list of conscientious objectors for “many years,” that she didn’t know it was an abortion until she walked in the room – The Atlantic reports that she had been told she was going to help a patient who had suffered a miscarriage – and that she was pressured to go through with it despite the presence of others who could have taken her place.

“Don’t hate me,” the doctor allegedly told her as she entered the room and learned the truth.

OCR further determined that UVMMC has subjected other medical staff to the same situation, and even maintains a policy that “admits to circumstances where UVMMC can and will force staff—on pain of adverse action or discipline—to participate in abortions against their moral or religious objections.” All of the above is in violation of the federal Church Amendments protecting health care workers’ conscience rights, as well as HHS grant conditions to which UVMMC agreed.

OCR has given UVMMC 30 days to verify whether it will change its policies to comply with federal law and grant rules, or else its case will be referred to HHS’s Health Resources and Services Administration (HRSA) for potential revocation of federal funds.

“Forcing medical staff to assist in the taking of human life inflicts a moral injury on them that is not only unnecessary and wrong, it violates longstanding federal law,” OCR director Roger Severino said. “Our investigation has uncovered serious discrimination by UVMMC against nurses and staff who cannot, in good conscience, assist in elective abortions. We stand ready to assist UVMMC in changing its policies and procedures to respect conscience rights and remedy the effects of its discrimination.”

“This is the first time we’ve ever represented somebody who was put in a position where she couldn’t escape from it, even though her employer knew she was a conscientious objector,” American Center for Law & Justice (ACLJ) attorney Francis Manion, who is representing the nurse, told The Atlantic.

“Doctors and nurses should never be forced to choose between risking their jobs or violating the dictates of their consciences in assisting or performing an abortion,” Charlotte Lozier Institute scholar and family nurse practitioner Sharon MacKinnon reacted to the news. “The convictions that stop me from assisting in abortion – the taking of an innocent human life – are the same convictions of compassion and care for the most vulnerable that drew me to the nursing profession in the first place.”

Religious liberty and conscience rights have been a priority of the Trump administration, from forced abortion participation and contraception mandates to religious hiring decisions and state discrimination against pregnancy centers. Last year, Severino presided over the creation of a special OCR office dedicated exclusively to enforcing conscience protection and religious freedom for healthcare workers, particularly as they pertain to “coercion on issues such as abortion and assisted suicide.”