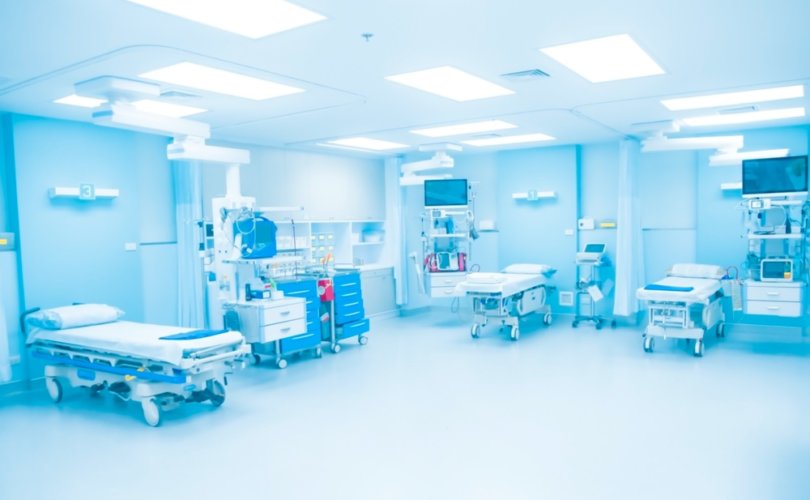 UNITED STATES, October 21, 2020 (LifeSiteNews) – Two hospitals have amended their policies to allow patients to receive visits from clergy as well as the sacraments, in a recent victory for the Office for Civil Rights (OCR) in the Department of Health and Human Services (HHS).

The HHS reports that the Conscience and Religious Freedom Division, part of the OCR, managed to effect changes in two separate hospitals, requiring them to ensure that patients could have access to the sacraments.

In July of this year, a mother issued a complaint against MedStar Southern Maryland Hospital Center (MSMHC) claiming that they had violated her religious freedom. After having given birth alone “she was separated from her newborn child because she had tested positive for COVID-19 upon admission to the hospital.”

The mother asked the hospital to allow a Catholic priest inside, in order to baptize her newborn son. However, her request was refused by the hospital, “due to a visitor exclusion policy adopted in response to the COVID-19 pandemic.”

The OCR directed the hospital to a document drawn up by the Center for Medicare and Medicaid Services, which states that “Facilities must ensure patients have adequate and lawful access to chaplains or clergy in conformance with the Religious Freedom Restoration Act and Religious Land Use and Institutionalized Persons Act.”

As a result, the MSMHC changed its policy, allowing all patients to have access to “religious services from the religious leaders of their choice at any reasonable time, as long as the visit does not disrupt care.”

A second case occurred in Virginia’s Mary Washington Healthcare (MWHC), which resulted in the Catholic Diocese of Arlington lodging a complaint with the Conscience and Religious Freedom Division. The diocese stated that the hospital had refused entrance to a priest who had been called to administer the Last Rites to a patient who was nearing the end of his life. The patient had also tested positive for COVID-19.

After you have signed the petition, please take a few minutes to politely call the USCCB's Respect Life Office and ask the bishops to issue a united statement in defense of Amy Coney Barrett's Catholic faith and her pro-life beliefs. Their phone number is: 202-541-3070. Or, write them an email at: [email protected]

The hospital later reversed its decision, when it learnt about the complaint and allowed the priest to enter and administer the sacraments.

Despite this permission, another occasion arose in the MWHC, in which a priest was asked by the family to visit a patient in intensive care, yet was refused. The hospital forbade entry except for “end-of-life situations.”

Once again, the OCR intervened, and MWHC updated their policy to allow for clergy visitation to non-COVID patients. For patients with the virus, the hospital now allows clergy visits, but extra measures are in place, such as completing “infection prevention training,” wearing PPE, and signing “waiver acknowledging the risks of COVID-19 transmission.”

If he has to visit a COVID-19 patient in an emergency, the visiting cleric must self-isolate for 14 days if he has not completed infection training.

The news is very welcome, in the light of many hospitals and care facilities imposing stringent visiting policies during the recent months of “corona tide.” Priests have been widely barred from gaining entrance to hospitals in order to administer the Sacraments, particularly those of the Last Rites.

Family visits to relatives in hospitals have been heavily curtailed, and widely banned during the height of COVID-19 lockdowns. Patients often ended dying on their own, without family with them in their last hours.

Care homes also participated in the exclusion policy, with patients and residents forced to isolate in their rooms, devoid of all normal human contact. Even the gradual lifting of such bans has still resulted, in some cases, in visits being limited to one per week with a maximum of thirty minutes, with the visitor mostly hidden under protective clothing.

In March, there was public outcry in New York City after a number of hospitals banned women from having anyone accompany them – even their husbands – during labor and delivery. The city government forced them to backtrack, but many hospitals around the U.S. (and around the world) still severely restrict who can be with a woman as she gives birth. Other hospitals now routinely separate supposedly COVID-19 positive mothers from their newborns, a practice widely panned as traumatizing and inhumane.