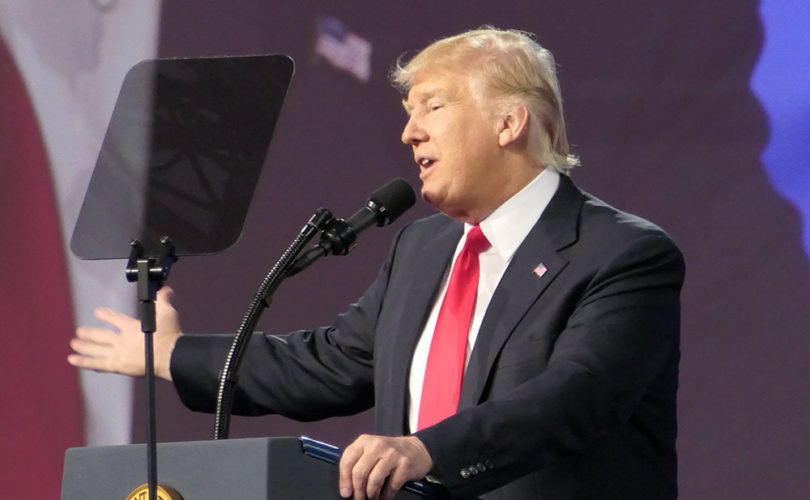 WASHINGTON, D.C., May 26, 2020  (LifeSiteNews) – President Donald Trump is considering several methods of reviewing actions by big tech companies unfairly discriminating against conservatives online, according to a report published in the Wall Street Journal this past weekend.

The report claims that “people familiar with the matter” say the new plans could include a White House-created commission to examine allegations of online bias and censorship and that federal agencies, such as the Federal Communications Commission and the Federal Election Commission, could be encouraged by the Trump administration to conduct similar reviews.

The report highlights a May 16 Twitter post by Trump, in which he said “The Radical Left is in total command & control of Facebook, Instagram, Twitter and Google. The Administration is working to remedy this illegal situation. Stay tuned, and send names & events.”

The Radical Left is in total command & control of Facebook, Instagram, Twitter and Google. The Administration is working to remedy this illegal situation. Stay tuned, and send names & events. Thank you Michelle! https://t.co/ZQfcfD3Hk9

In that tweet, Trump highlighted a clip from a speech given by conservative commentator Michelle Malkin in which she discussed big tech bias against conservatives. That clip was subsequently removed from Twitter, but has now been uploaded again by another user.

“When I planted my little flag in the social media world on the Internet almost 20 years ago, I never thought that I'd have to wake up one day and wonder if my entire website was going to be unplugged because of an opinion that I expressed,” Malkin told a 2019 conservative conference.

“And yet there are many of my friends and allies – your compatriots – who not only can no longer communicate on social media on Twitter on Facebook or Instagram but who also can no longer gather peacefully at hotel conferences to discuss their ideas.”

Twitter and Google both gave statements to the Wall Street Journal effectively denying that they discriminated against conservatives. Facebook said that “[p]eople on both sides of the aisle disagree with some of the positions we’ve taken” but that the company remains “committed to seeking outside perspectives and communicating clearly about why we make the decisions we do.”

In an interview with Breitbart News released yesterday, Vice President Mike Pence said that the Trump administration would not tolerate online bias against conservatives.

Pence told Breitbart voices outside of the mainstream media have been crucial in communicating the truth to the American public throughout the Trump presidency, and that conservative thinkers online would be crucial in the upcoming presidential election.

“The great news is there are—in addition to Breitbart—there are great and consistent voices bringing the facts to the American people,” he said.

“While many in the mainstream media have been after this president, after this administration, since before our inauguration, it’s been that chorus of voices on the Internet that have brought forth the truth and the facts to the American people,” he continued.

“It’s been those voices that’s made a difference for America, and we have every confidence going forward that we’re going to make sure the First Amendment rights of people who cherish freedom and cherish what this president has been able to do for this country are preserved, and I have every confidence that with that great army of conservative thinkers on the Internet we’re going to drive toward a great victory come November.”