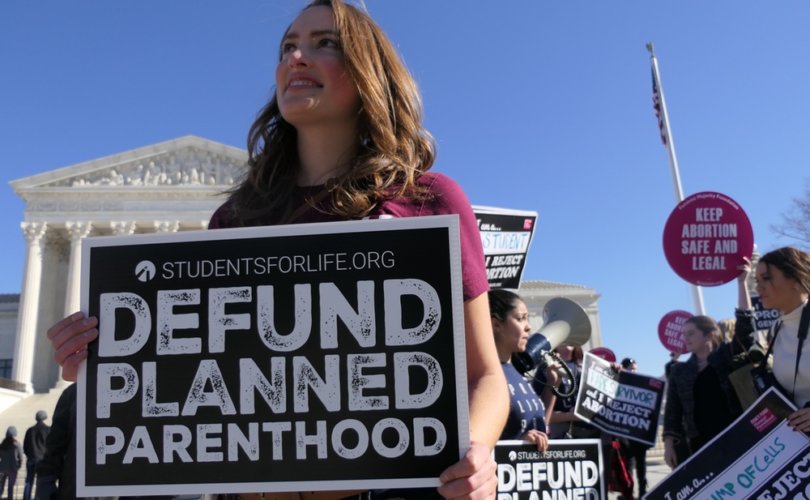 WASHINGTON, D.C., August 30, 2018 (LifeSiteNews) – The Trump administration has shortened the current funding period for family planning grants, in a move believed to ensure that his long-awaited reduction of subsidies to Planned Parenthood takes effect much sooner.

Whereas Title X funding periods previously lasted for three years, the current one is now set to expire in March 2019, The Hill reports. The U.S. Department of Health and Human Services (HHS) did not respond to the publication’s requests for comment.

The change is being interpreted on both sides as an effort to stop giving some of the government grants to Planned Parenthood as soon as possible. President Donald Trump announced in May a new regulation excluding from the program facilities that commit or refer for abortions. It’s expected to eliminate more than $50 million of the $500+ million Planned Parenthood receives from federal taxpayers every year.

Pro-lifers angered by Republicans’ failure to more comprehensively defund the abortion giant were heartened by Trump’s move to do what he could unilaterally, but disappointed again when the administration administered fresh grants to thirteen Planned Parenthood affiliates earlier this month because the new rules haven’t taken effect yet. The new funding periods appear to be an effort to ensure that doesn’t happen again.

Once defunded, Planned Parenthood’s federal subsidies would be redirected to federally-qualified health centers and rural health clinics across the country, which dramatically outnumber Planned Parenthood locations in every state.

“President Trump and his Administration are so passionate about attacking women’s access to health care that they literally can’t wait to get moving on it,” Sen. Patty Murray, D-WA, declared. “Shortening these grants is a gimmick, plain and simple.”

While federal law forbids Planned Parenthood from spending taxpayer dollars directly on most abortions, pro-lifers warn that subsidies earmarked for non-abortion purposes ultimately enable abortion groups to commit more abortions by freeing up money from their other revenue services.

The pro-life Susan B. Anthony List (SBA List) notes that the $326.4 million increase in the organization’s federal subsidies from 2000 to 2013 corresponds with a 66 percent increase in the number of babies it aborted, while Duke University healthcare analyst Chris Conover estimated in 2015 that taxpayers ultimately cover almost 25 percent of all abortion costs.