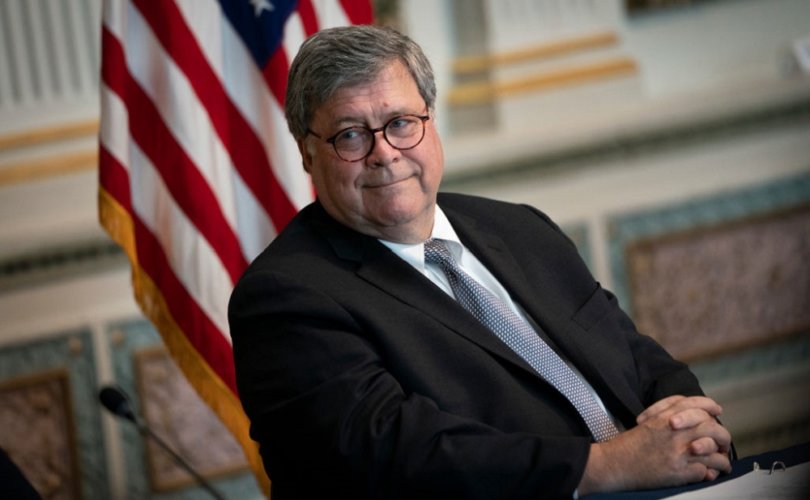 WASHINGTON, D.C, September 14, 2020 (LifeSiteNews) — The Trump administration has once again demonstrated its support for the Archdiocese of Indianapolis’s right to fire a teacher living in a homosexual relationship and thus contradicting Catholic teaching.

The teacher, Joshua Payne-Elliott, had worked for 13 years at Cathedral High School. The school’s president informed him in mid-2019 that the archdiocese was ordering that he be fired because of his 2017 “marriage” to a male teacher at Brebeuf Jesuit Preparatory School. Payne-Elliott subsequently sued the archdiocese, led by Archbishop Charles C. Thompson.

The Department of Justice (DOJ), in the amicus brief filed Tuesday, argued that it had a “substantial interest” in defending the right to religious liberty of the archdiocese.

“Religious liberty is a foundational principle of enduring importance in America, enshrined in the United States Constitution and in other sources of federal law,” the 44-page document emphasized. “The United States is strongly invested in ensuring that its citizens’ religious freedoms are not impinged and, to that end, regularly files statements of interest and amicus briefs addressing this issue in courts at every level, from trial courts to the Supreme Court of the United States.”

The DOJ, headed by Attorney General Bill Barr, explained in a press release “that three separate aspects of the First Amendment prevent a former Catholic high school teacher from suing the Archdiocese over his termination: the church-autonomy doctrine, the Archdiocese’s right to expressive association, and the ministerial exception.”

Assistant attorney general for the Civil Rights Division Eric Dreiband said, “Our ancestors arrived on our shores to establish a country where the people would be secure to practice their faiths and to gather freely with their religious communities. To that end, the First Amendment to the United States Constitution protects the right of religious institutions and people to decide what their beliefs are, to associate with others who share their beliefs, and to determine who will teach the faithful in their religious schools.”

“Let there be no doubt,” he added, “the Department of Justice will continue to defend the First Amendment rights to believe, worship and associate in a manner that respects the dignity and choice of all individuals.”

Joshua Minkler, the United States attorney for the Southern District of Indiana, commented, “There is no more fundamental constitutional principle on the proper relationship between church and state than that the government must leave religious decisions to religious organizations.”

According to the Catechism of the Catholic Church, homosexual relations are “intrinsically disordered” and “contrary to the natural law” and cannot be approved under any circumstances. Individuals afflicted with same-sex attraction must be “accepted with respect, compassion, and sensitivity.” Like everyone else, they are “called to chastity.”

The DOJ emphasized that the courts “cannot second-guess how religious institutions interpret and apply their own religious laws. U.S. Supreme Court precedent has long held that the ‘First Amendment requires civil courts to refrain from interfering in matters of church discipline, faith, practice and religious law.’”

In July of this year, the Supreme Court had upheld religious schools’ right to hire and fire teachers based on teachers’ adherence to the school’s religious doctrine.

“The religious education and formation of students is the very reason for the existence of most private religious schools, and therefore the selection and supervision of the teachers upon whom the schools rely to do this work lie at the core of their mission,” the Supreme Court argued.

“Judicial review of the way in which religious schools discharge those responsibilities would undermine the independence of religious institutions in a way that the First Amendment does not tolerate.”

On the other hand, the Supreme Court also ruled this summer that longstanding anti-discrimination law should be reinterpreted to cover homosexuality and gender confusion. The majority opinion was written by Trump appointee Justice Neil Gorsuch.

About a year ago, the Trump administration had already come out in support of the Archdiocese of Indianapolis. The DOJ had filed a Statement of Interest explaining that the Supreme Court recognizes religious organizations’ “independence from secular control or manipulation, in short, power to decide for themselves, free from state interference, matters of church government as well as those of faith and doctrine,” which in this case bars government from “second-guessing the Archdiocese’s interpretation and application of Catholic law.”

While Cathedral High School had complied with the archdiocese’s demand to fire the homosexual teacher, Brebeuf Jesuit Preparatory School, where his male partner was teaching, refused.

The Vatican’s Congregation for Catholic Education temporarily suspended the archdiocese’s revocation of Brebeuf’s Catholic identity pending a review of the case, which, according to the archdiocese, is standard practice. Currently, the school describes itself as a “Catholic Jesuit school with daily Mass.”