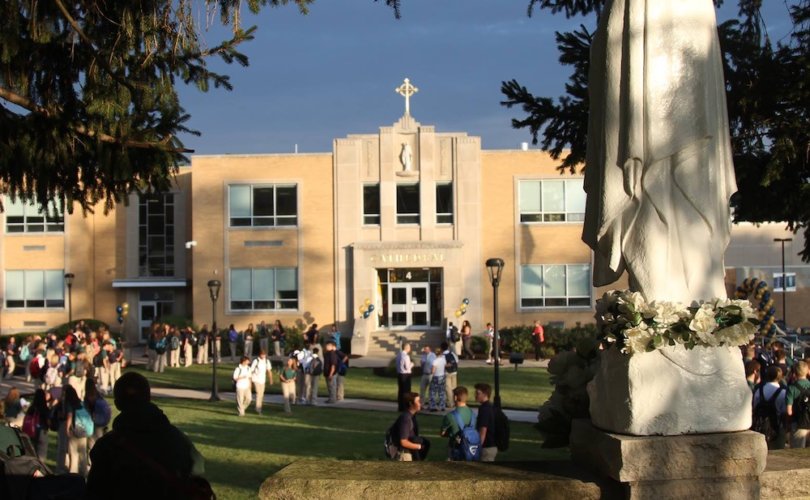 INDIANAPOLIS, September 30, 2019 (LifeSiteNews) — The Trump administration’s Department of Justice has come out in support of Archdiocese of Indianapolis’s constitutional right to insist that its employees follow the Catholic faith in a statement about the firing of a homosexual teacher in a same-sex “marriage.”

Joshua Payne-Elliott taught for 13 years at Cathedral High School and renewed his contract on May 21, but he was informed on June 23 that the archdiocese was ordering that he be fired because of his 2017 “marriage” to a male teacher at Brebeuf Jesuit Preparatory School. Payne-Elliott is seeking damages for compensation and emotional distress, as well as a discrimination complaint with the federal Equal Employment Opportunity Commission.

He has reportedly arrived at a satisfactory and confidential legal settlement with Cathedral High School but not with the Archdiocese of Indianapolis, which has also forbidden Brebeuf from identifying as Catholic for refusing to dismiss the other teacher.

“In our Catholic schools, all teachers, school leaders and guidance counselors are ministers and witnesses of the faith whose ultimate responsibility is to educate and form students,” the archdiocese declares on its website. “Those who act as ministers of the Catholic Church must uphold the teachings of the Church in their daily lives, both in and out of school. We expect all who sign a ministerial contract do so in good faith.”

On Friday, the Justice Department filed a Statement of Interest in the case in Marion County court supporting the archdiocese, the Associated Press reports. The statement explains that the U.S. Supreme Court recognizes religious organizations’ “independence from secular control or manipulation, in short, power to decide for themselves, free from state interference, matters of church government as well as those of faith and doctrine,” which in this case bars government from “second-guessing the Archdiocese’s interpretation and application of Catholic law.”

“The First Amendment demands that this lawsuit be dismissed,” the department concludes.

“The First Amendment to the United States Constitution protects the right of religious institutions and people to decide what their beliefs are, to teach their faith, and to associate with others who share their faith,” Assistant Attorney General Eric Dreiband said in a press release. “The First Amendment rightly protects the free exercise of religion.”

“If the First Amendment means anything, it means the government can’t punish the Catholic Church for saying who is Catholic,” Luke Goodrich, vice president and senior counsel of the religious liberty firm Becket, responded. “This lawsuit fails on so many levels; we’re glad to see the Department of Justice weighing in.”

The Vatican’s Congregation for Catholic Education, meanwhile, temporarily suspended the archdiocese’s revocation of Brebeuf’s Catholic identity pending a review of the case, which the archdiocese says is standard practice.

LifeSiteNews is currently running a petition in support of Archbishop Charles Thompson for “using [his] authority to teach the faithful — both inside and outside of [his] Archdiocese — about the Church’s fidelity to teaching the young the truth about marriage.”

“If ‘Catholic’ is to mean anything at all, it must mean an adherence to Church teaching on core issues, like marriage,” the petition argues.