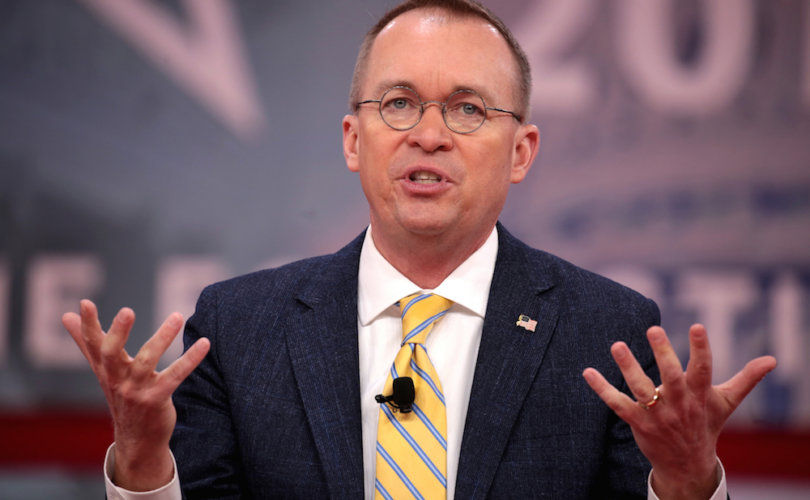 WASHINGTON, D.C., July 31, 2018 (LifeSiteNews) — Pro-homosexual voices are up in arms over remarks by a Trump administration official pledging to end the Obama-era practice of using aid to influence foreign nation’s policies on abortion and homosexuality.

U.S. Office of Management and Budget (OMB) director Mick Mulvaney addressed the State Department’s Ministerial to Advance Religious Freedom on July 25, CNS News reported, during which he expressed disgust that “U.S. taxpayer dollars are used to discourage Christian values in other democratic countries.”

“It was stunning to me that my government under a previous administration would go to folks in sub-Saharan Africa and say, ‘We know that you have a law against abortion, but if you enforce that law, you’re not going to get any of our money,’” Mulvaney explained. “‘We know you have a law against gay marriage, but if you enforce that law, we’re not going to give you any money.’”

“Persecution oftentimes stops far short of life-and-death matters (…) That is a different type of religious persecution that I never expected to see,” he said.

“There are a lot of people in this government who just want to see things done differently,” Mulvaney assured the crowd.

Despite the fact that the only specific examples Mulvaney cited were laws protecting preborn babies and rejecting same-sex “marriage,” numerous left-wing and pro-LGBT websites claimed he was defending laws that imprison or execute citizens for homosexuality.

“Mulvaney said that the Obama administration had gone too far in trying to promote equal rights, such as President Barack Obama saying he would put an emphasis on the importance of LGBTQ rights in a visit to Kenya in 2015,” Bailey Vogt at Metro Weekly wrote. “Kenya currently punishes homosexuality with up to 14 years in prison.”

In fact, Mulvaney does not specifically invoke Uganda or Kenya; he only recalls discussing the matter with “a large group of men and women from sub-Saharan Africa.”

As for the substance of Mulvaney’s remarks, Breitbart’s Robert Kraychik noted that Barack Obama spent “tens of millions” of dollars to block “anti-LGBT” measures abroad and in 2015 earmarked more than half a billion to assist “marginalized groups” and “support gay communities and causes.”

The previous administration also bragged about providing more than $200 million to the pro-abortion UN Population Fund (UNFPA) since 2009, in the name of promoting “reproductive health.”

Even the New York Times reported in 2015 that the Obama administration’s aggressiveness in promoting homosexuality abroad may have done “more harm than good,” provoking defensiveness in foreign governments and electorates that led to harsher laws than would have otherwise been enacted.

Rev. George Ehusani, former secretary general of the Catholic Secretariat of Nigeria, told the Times that a 2014 Nigerian law imposing jail time on participation in same-sex “marriages” or civil unions, gay clubs, and “amorous” public displays of homosexuality “would not have come in the form in which it did” without U.S. pressure.

LGBT commentators’ latest attack on the Trump administration is particularly ironic in light of pro-family activists’ assessment that President Donald Trump’s record on LGBT issues is decidedly mixed, praising his commitment to religious liberty while criticizing him for accepting same-sex “marriage” and various displays of gay “pride.”