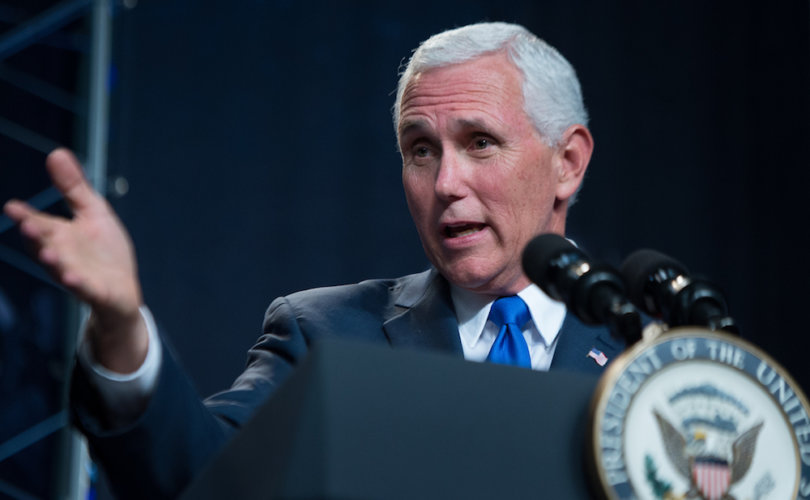 “It is my privilege to announce that President Trump has ordered the State Department to stop funding ineffective relief efforts at the United Nations,” Pence told the In Defense of Christians summit. “From this day forward, America will provide support directly to persecuted communities through USAID.”

USAID is a government agency that provides foreign assistance.

It “carries out U.S. foreign policy by promoting broad-scale human progress at the same time it expands stable, free societies, creates markets and trade partners for the United States, and fosters good will abroad,” its website says.

USAID also describes itself as “the world's largest family planning bilateral donor.” It’s unclear whether its well-documented promotion of contraception will have anything to do with relief efforts in the Middle East.

Pence noted that although the Obama administration devoted “well over a billion dollars in humanitarian aid to the Middle East,” most of that money went through the UN, which “has too often failed to help the most vulnerable communities, especially religious minorities.”

Pence said that of the more than 160 projects the UN claims are in Christian areas, “a third” of them aren’t.

Many UN projects that are labeled complete “have little more than a U.N. flag hung outside an unusable building, in many cases a school,” said Pence.

The UN also “too often” denies funding requests that come from religious groups even though these groups have “proven track records and deep roots in these communities.”

“The United States will work hand-in-hand from this day forward with faith-based groups and private organizations to help those who are persecuted for their faith,” said Pence.

During this same speech, Pence announced that in December he will visit the Middle East at Trump’s request.

“One of the messages that I will bring on the President’s behalf to leaders across the region is that now is the time to bring an end to the persecution of Christians and all religious minorities,” said Pence.

Words against 'genocide' in Middle East have been 'put into action'

“A year ago, the United States used the right word to describe what was happening to Christians and other religious minorities in the Middle East. That word was genocide,” said Knights of Columbus CEO Carl Anderson. Those words have now been “put into action.”

The Knights of Columbus has lobbied for the U.S. to directly aid genocide-targeted communities for nearly two years, warning “that Christians and other religious minorities in the Middle East have been falling through the cracks in the aid system,” explained Anderson.

“The hope this announcement will give to Christians in the Middle East – and the real world impact it will have on the survival of threatened minority communities – cannot be underestimated,” said Anderson.

Pence’s announcement this week seems to be the fulfillment of Trump’s promises to help Christians and religious minorities who are being exterminated in the Middle East.

At the National Prayer Breakfast in February, Trump said the whole world has a duty to stop the “genocide” Christians are undergoing in that region.

Trump promised his administration would “do everything in its power to defend and protect religious liberty in our land” and around the world.

Similarly, Pence told the National Catholic Prayer Breakfast in June that ISIS is committing “genocide” against Christians and needs to be stopped. In the same speech, Pence thanked the Knights of Columbus for their efforts helping Middle Eastern Christians and said Trump “stands with those who are persecuted for their faith around the world.”

“I commend the president for following through on his promise to protect religious freedom by ensuring that the vulnerable among us are not targeted because of their religion, and are able to rebuild their lives and freely live out their faith in their ancestral homelands,” said Tony Perkins, president of the Family Research Council (FRC).

Woman kidnapped by ISIS told them 'Jesus had died for her, so she was willing to die for Him'

“We will no longer rely on the United Nations alone to assist persecuted Christians and minorities in the wake of genocide and the atrocities of terrorist groups,” said Pence.

He used the term “radical Islamic terrorism” twice in his speech.

“Be assured this administration calls these vicious actions by ISIS what they truly are – they are genocide and they are crimes against humanity. And we will call them what they are,” Pence promised.

Pence called ISIS a “brutal band of savages” and praised the resilience of Christians who have been captured and tortured by ISIS but refused to denounce their faith.

He shared the story of a woman named Kahlia, a Christian in her 50s who was captured by ISIS:

She was taken hostage in her homeland of Iraq. And during her captivity, the terrorists of ISIS demanded that she convert. They held a gun to her head. They held a sword to her neck, but steeled by her faith, she refused. And with that faith, she fought back.

She was beaten for her fearlessness, threatened with death on a daily basis, but as she told her captors, Jesus had died for her, so she was willing to die for Him.

Kahlia’s faith is an inspiration. It carried her through this terrible ordeal. She still lives, but tens of thousands of fellow believers and those from so many other faith traditions have lost their lives at the hands of ISIS.

Travis Weber, director of FRC’s Center for Religious Freedom, said persecuted Christians in the Middle East lack “political power” and are “overlooked in the eyes of the world.”

They “have not received proper assistance in returning to their ancestral lands, the same lands the first Christians walked nearly 2,000 years ago.”

“Meanwhile, Iran and other power players are trying to come in and ply their influence in the vacuum created by ISIS's defeat,” Weber warned. “It is in these situations that protecting the freedom of religion – and inculcating society with a true understanding of this right – is most critical.”