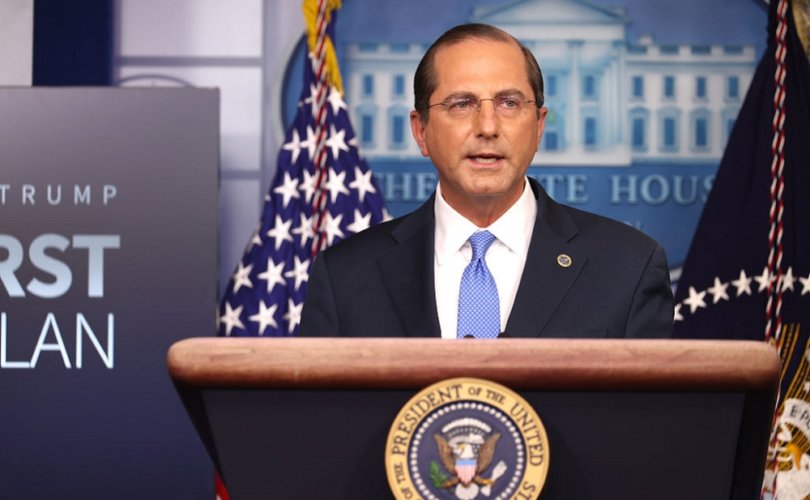 The announcement was made during “Life Is Winning: Celebrating 4 Years of Pro-Life Accomplishments,” an event hosted by Vice President Mike Pence at the White House, highlighting the many pro-life accomplishments of the Trump administration.

California: $200 million in funds to be withheld from for violating federal conscience laws

Secretary Alex Azar of the Department of Health and Human Services (HHS) announced that his department is taking enforcement action against the State of California “for imposing universal abortion coverage mandates on health insurance.”

“We have informed California that this policy clearly violates federal conscience laws but the state refuses to fix the issue and comply,” explained Azar. “Accordingly, we plan to withhold $200 million in federal Medicaid funds from the state in the first quarter of 2021.”

“And unless California amend its policies, we will seek to withhold an additional $200 million every quarter until it complies,” he added.

In January, LifeSiteNews’s Calvin Freiburger reported that the HHS issued a Notice of Violation to the state, declaring that California was in violation of the federal Weldon Amendment, which forbids federal assistance to states or localities that discriminatee against “any institutional or individual healthcare entity” on the basis “that the healthcare entity does not provide, pay for, provide coverage of, or refer for abortions.”

California officials chose not to heed the Trump administration’s warnings that the state is in defiance of federal religious liberty protections and said it would continue a policy of forcing private employers, even churches, to subsidize abortion.

Back in 2014, California enacted rules forcing all employers to fund health insurance plans that cover elective abortions on the theory that they are a “medically necessary” part of “basic health care,” regardless of religious or conscience-based objections. The state has been embroiled in lawsuits over the policy ever since.

“California will take no ‘corrective action,’” state attorney general Xavier Becerra wrote in a letter to HHS at the time. The letter noted that the Obama administration, which was notoriously pro-abortion, had previously been satisified that waivers offered by the state to religious objectors satisfied the requirements of the Weldon Amendment, and “the facts … have not changed” since then.

HHS revealed that the two complainants were the Missionary Guadalupanas of the Holy Spirit, a Catholic order of religious sisters, and Skyline Wesleyan Church, a non-profit Protestant group — organizations whose religious beliefs prevent them, in good conscience, from helping to pay for insurance coverage for elective abortions.

Vermont: DOJ suing hospital for forcing Catholic nurse to assist in an abortion

“This morning, the Department of Justice Civil Rights Division … sued to stop a hospital in Vermont from violating the rights of health providers who follow their consciences and refuse to assist in performing abortions,” announced acting associate U.S. attorney general Claire Murray.

An investigation by HHS found that in 2018, the University of Vermont Medical Center (UVMMC) had forced a Catholic nurse to participate in an elective abortion.

“What’s more, our suit alleges that the hospital actually misled the nurse into believing she was scheduled to assist in another, unobjectionable procedure,” said Murray.

“Although UVMMC could have readily, and without interruption to patient services, accommodated the religious or moral objections to elective abortion of its health care personnel, UVMMC has nevertheless illegally assigned numerous objecting personnel to such procedures,” explained a statement from the DOJ.  “In violation of the plain language of the Church Amendments, UVMMC’s ‘conflict of care policy’ reserves the right to disregard nurses’ expressed religious or moral objections to participating in abortion procedures.”

“Upon concluding its investigation, OCR issued a Notice of Violation letter on August 28, 2019, asking UVMMC to conform its policies to the Church Amendments and take other corrective action; however, UVMMC has refused to voluntarily comply with federal law and its contractual obligations as a federal grant recipient,” continued the DOJ statement. “HHS has referred the matter to DOJ, which filed suit in the U.S. District Court for the District of Vermont on behalf of HHS, seeking a court order requiring UVMMC to comply with the Church Amendments and uphold its contractual obligations.”

Marjorie Dannenfelser, president of the Susan B. Anthony List, who was present at today’s event, praised the Trump administration’s aggressive enforcement action.

“Federal conscience laws are more essential than ever at a time when pro-abortion Democrat-led states have tried to force health care professionals and entities, like nurses and insurance providers, to participate in abortion. Abortion is not health care; it is the destruction of innocent human life,” said Dannenfelser in a statement.

“Additionally, we now face the threat of a pro-abortion White House and a Cabinet stacked with radicals like Xavier Becerra, who has spent his career going after health professionals, charities, churches, and nuns who refuse to promote abortion on demand,” warned Dannenfelser.

“The Weldon and Church conscience amendments are not optional, they are federal law,” she continued. “Any incoming administration must enforce them and respect the foundational American freedoms and values they reflect.”