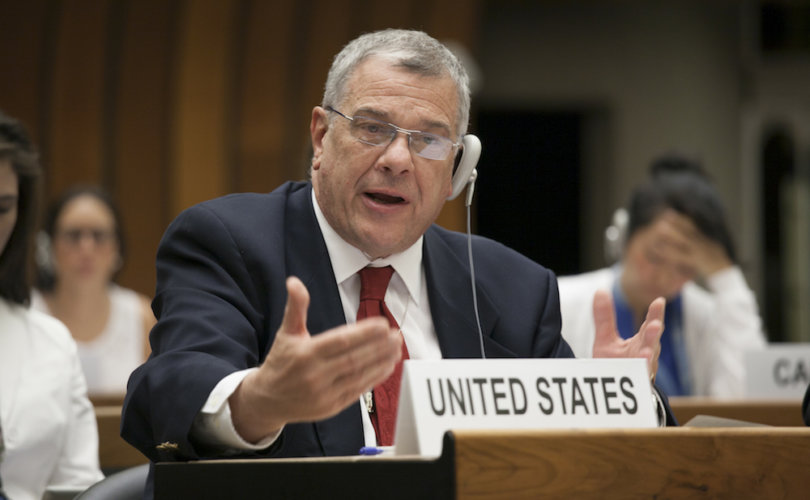 Michael G. Kozak is an ambassador with the State Department’s Bureau of Democracy, Human Rights, and Labor.Flickr

WASHINGTON, D.C., April 24, 2018 (LifeSiteNews) — The Trump administration is doubling down on recent comments that the United States will not join the international bandwagon for a “right” to abortion.

During a briefing Friday on the release of a State Department report on human rights around the world, a reporter asked Michael G. Kozak, an ambassador with the department’s Bureau of Democracy, Human Rights, and Labor, why a section on “women’s reproductive rights” had been removed from a list of American values. The language had been added under President Barack Obama.

Kozak explained that the language was originally meant to refer only to contraception access, and that it was recognized as such at the time. But since then “groups on both sides of that issue domestically have started to use the term,” he said, “and both seem to think it does include abortion and then argue about it.”

So the report’s authors decided to instead use “the term that’s used in the U.S. statute that requires the Human Rights Report, which is coerced family planning, namely coerced abortion or involuntary sterilization.” He noted that these remain very real problems in China, North Korea, and Belarus, among other countries.

Kozak further said he reviewed the previous year’s report and found contraception access to be a non-issue. “The answer in virtually every country was no, there were no obstacles other than, in almost every country, including our own, the availability in rural areas is less than it is in urban areas,” he said. “But we were taking a lot of space to explain that.”

In response to another question, Kozak stressed that under the past several administrations his office has “never taken the position that abortion was … a human right under international law.” The scope of the report is limited to “internationally recognized human rights,” so he said it would be improper to use it to take sides between countries that permit abortion and those that prohibit it.

“We don’t report on it because it’s not a human right,” Kozak said. “It’s an issue of great policy debate. You can have a good discussion, but there’s no internationally recognized standard as to what’s the right treatment.” So far, the U.S. and several African nations have managed to prevent the UN from officially enshrining abortion as an international human right.

Townhall noteed that Planned Parenthood Global claimed Friday that the deletion told the world “that the U.S. does not value women, girls, LGBTQ and other vulnerable communities.”

Kozak addressed these objections during the meeting, noting that there was “still a long section on women” in the report that addressed everything from domestic violence in Russia to restrictions on women’s rights in Saudi Arabia.

He also said the U.S. was concerned about LGBT rights regarding issues such as “criminaliz(ing) same-sex sexual activity” or “violence against people because of their LGBT status,” but wanted to distinguish those issues from “a lot of policy decisions in these areas that governments make that aren’t internationally recognized human rights,” such as transgender military service.

Kozak’s remarks follow statements last month from Bethany Kozma, a senior adviser at the U.S. Agency for International Development’s office of Gender Equality and Women’s Empowerment. She reportedly told a private meeting for the United Nations’ Commission on the Status of Women that the “U.S. is a pro-life country,” and as such wanted the commission’s final report to replace “modern contraception” with “family planning” that included abstinence education.

Anonymous UN officials complained about the remarks to the press. The Trump administration neither confirmed nor commented on the controversy at the time, citing the private nature of diplomatic negotiations, but one official did say that “as the world’s largest bilateral donor to global health programs, the U.S. remains committed to helping women and children thrive, particularly in countries where the need is greatest.”

The International Planned Parenthood Federation has said it stands to lose $100 million from President Donald Trump’s reinstatement and expansion of the Mexico City policy, which forbids tax dollars from funding foreign entities that perform or promote abortions.