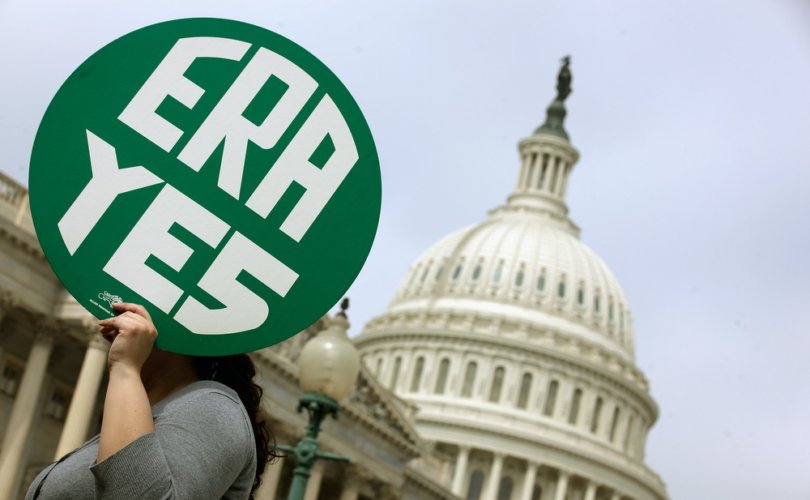 January 8, 2020 (LifeSiteNews) – Left-wing hopes of reviving the long-dormant Equal Rights Amendment (ERA) were dashed this week as the Trump administration declared that the proposed constitutional amendment’s supporters would have to restart the amendment process from scratch if they want to enact it so long after its original deadline.

Lawmakers in South Carolina, Utah, and Virginia have been working on reviving the ERA, while the U.S. House Judiciary Committee voted in November to retroactively lift its deadline for ratification. But that won’t suffice to let ERA supporters simply pick up where they left off, according to a 38-page opinion from the Department of Justice’s Office of Legal Counsel.

“We conclude that the ERA Resolution has expired and is no longer pending before the States,” it reads. “Even if one or more state legislatures were to ratify the 1972 proposal, that action would not complete the ratification of the amendment, and the ERA’s adoption could not be certified under 1 U.S.C. § 106b. In addition, we conclude that when Congress uses a proposing clause to impose a deadline on the States’ ratification of a proposed constitutional amendment, that deadline is binding and Congress may not revive the proposal after the deadline’s expiration.”

In order to legitimately ratify the ERA, supporters would instead have to either pursue a new “convention sought by two-thirds of the state legislatures,” or Congress would have to “propose that amendment once more” and approve it with “two-thirds of both Houses” (as outlined in Article V of the U.S. Constitution), at which point states would have to take all-new ratification votes.

National Review’s Ed Whelan noted that no less a feminist authority than Supreme Court Justice Ruth Bader Ginsburg has conceded as much, having written that she looks forward to its supporters one day “starting over again collecting the necessary states to ratify it.”

A coalition of pro-life leaders wrote in January against voting to revive the ERA, declaring it would be more accurately named the “Everything Related to Abortion Act.”

“Let us be clear, laws protecting women’s interests will be undercut by the radical language of the ERA that strips away from women their unique place in the law,” the letter says. “Not only will real protections be overwritten by this heavy-handed measure, the most profound change will be creating a constitutional foothold for abortion and introduction of vague language on ‘sex’ that may harm women’s unique interests.”