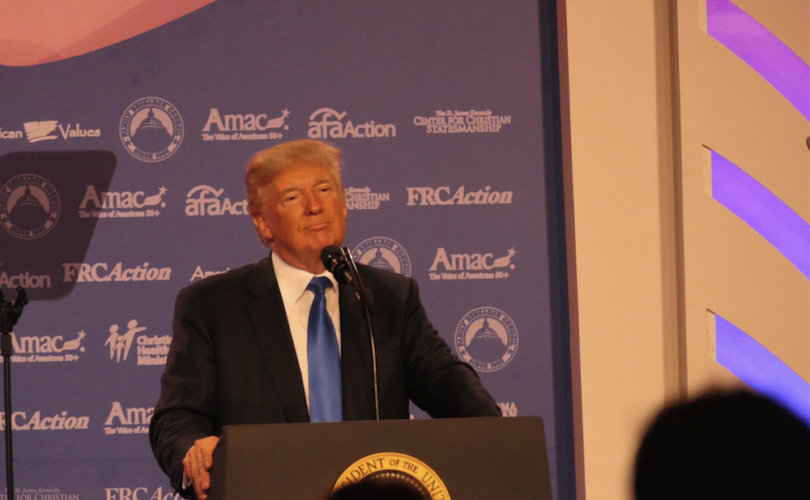 WASHINGTON, D.C., October 13, 2017 (LifeSiteNews) – President Trump said this morning that his administration is “stopping cold the attacks on Judeo-Christian values” in a rousing speech at the Values Voter Summit.

In his first major speech to a socially conservative conference since his election, Trump addressed parental rights, religious liberty, the right to life, and the importance of God over government.

“This morning, I am honored and thrilled to return” as the first sitting president, he said. Trump joked that he didn’t even need to ask attendees to vote for him, but he was still there.

“Religious liberty is enshrined in the very First Amendment in the Bill of Rights,” he said. We “very, very beautifully” pledge allegiance to “one nation under God.”

America is “a country that never forgets that we are all – all, every one of us – made by the same God in heaven.”

We are “substantially ahead of schedule” on implementing Trump’s promises to protect religious liberty, he said, even though there isn’t an actual “schedule.”

“I appointed and confirmed a Supreme Court justice in the mold of the late, great Justice Antonin Scalia,” Trump told the excited crowd. He mentioned that one of his first actions as President was reinstating the Mexico City Policy prohibiting U.S. funding of abortion and abortion advocacy overseas.

Trump said his Department of Justice’s new guidance to all federal agencies will “ensure that no religious group is ever targeted under my administration.”

“We have also taken action to protect the conscience rights of groups like the Little Sisters of the Poor,” said Trump. Last week, his Department of Health and Human Services undid President Obama’s coercive mandate forcing religious employers to violate their consciences by participating in the provision of contraception and life-ending drugs.

The Little Sisters “were going through hell and then all of a sudden they won,” said Trump. The “Little Sisters of the Poor and other people of faith live by a beautiful calling and we will not let bureaucrats take away that calling.”

“We know that the American family is the true bedrock of American life,” Trump continued. It’s not the role of government to “meddle in your faith and (tell you) how to live, what to say, and how to pray.”

“Parents, not bureaucrats, know best how to raise their children,” he said. “We know that it’s the family and the church – not government officials – that know best how to create strong and loving communities. And above all else, we know this. In America, we don’t worship government, we worship God.”

Trump blasted Iran as a “terrorist nation like few others,” said his administration has “been more against ISIS in nine months than the previous administration” was during its entirety.

ISIS has “ruthlessly slaughtered innocent Christians,” and committed “the vicious killing of other Muslims,” said Trump. “We’ve made their lives very, very difficult.”

Trump said Americans’ “hope” is “the one force” that can’t be stopped.

He quoted the first book of John, a verse Catholics used to hear after every Sunday Mass: “the light shines in darkness, and the darkness has not overcome it.”