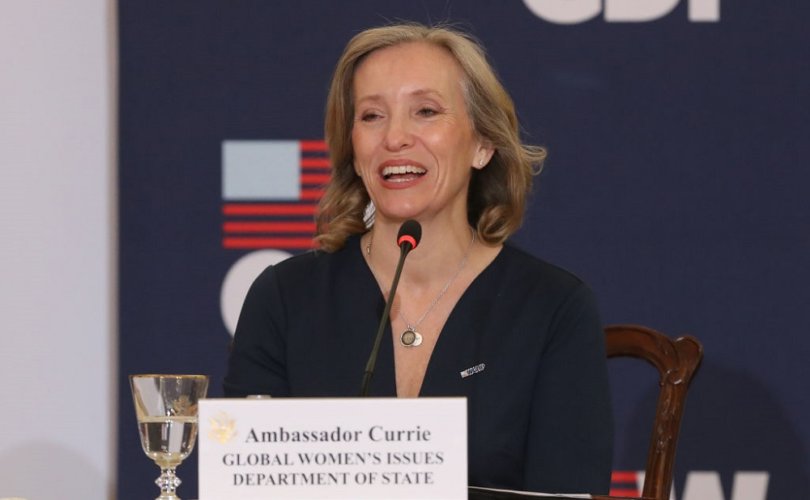 WASHINGTON, D.C., July 31, 2020 (C-Fam) — Trump administration officials appeared at a hearing before the Subcommittee on National Security last week to provide Congressional members an update on the implementation of the Women, Peace and Security Act, passed by Congress and signed by President Trump in October 2017. Democrats and abortion rights advocates have sought to tarnish the President’s record advancing global women’s rights due to his Administration’s efforts to keep abortion out of international policy and programs.

“While the Women, Peace, and Security Strategy looks good on paper, the Trump Administration has repeatedly failed to demonstrate its commitment to defending the rights of women and girls by attacking access to sexual and reproductive health and sidelining women during conflict resolution and peace negotiations,” said Congressman Stephen Lynch (D-MA) in his opening statement.

In June, the Trump Administration released implementation plans for the four departments responsible for administering the U.S. Women, Peace, and Security Strategy — Department of State, Department of Defense, the U.S. Agency for International Development and the Department of Homeland Security. While Administration officials appeared at a virtual civil society event to roll out the new plans they declined a Congressional invitation by House Democrats due to White House procedures that witnesses appear in person.

This refusal prompted a letter to Secretaries of all four Agencies accusing them of “obstruction” and the Trump Administration of “aggressively” pursuing policies that conflict with its WPS Strategy.

The letter authored by the chairwoman of the House Oversight and Reform committee Carolyn Maloney (D-NY) criticized Trump Administration efforts to remove the phrase sexual and reproductive health in negotiated United Nations documents and in the Security Council. It cited the suspension of funding to the UN Population Fund and the recent peace deal negotiated between the United States and the Taliban as substantiation that President Trump fails to protect the rights of women and girls. The subcommittee offered to accommodate with an in-person hearing with limited Members present.

Though the four Agency representatives laid out in detail efforts to advance women’s rights and protection through participation in conflict prevention and resolution, questions posed by Members focused on sexual and reproductive health.

“First of all I want to clarify that there is no internationally recognized human right to an abortion. That is not a recognized right,” said Ambassador-at-Large Kelley Currie. Currie, now presiding over the Global Women’s Issues Office, responded to a question from Congressman Harley Rouda (D-CA) who took issue with the Administration’s efforts to stymie the promotion of abortion through the UN system.

Currie attempted to cite U.S. law that prohibits U.S. taxpayer funds for coercive family planning to justify the decision to withhold funding to the UN Population Fund but was interrupted by the California Congressman. Rouda redirected the questioning to the restriction of contraception — another false accusation being made by reproductive rights advocates.

Currie responded that the Administration does not restrict access to contraception. The U.S. is the largest provider of family planning assistance, she said and continues to do so through massive expenditures of bilateral and multilateral assistance.

The Republican ranking member of the subcommittee Glenn Grothman (R-WI) vocalized the preoccupation with “reproduction” by his Democratic colleagues. “And I’ll caution you, there are some things in the United States I don’t think we should be proud of and I don’t think we should be exporting around the world.” Grothman cited the permissive nature of U.S. abortion laws saying the U.S. is one of seven countries that allows an unfettered right to abortion.

In addition to the Trump Administration’s extensive work on Women, Peace and Security, Trump signed legislation that mandates USAID programming to promote gender equality and women’s empowerment and took executive action on a global initiative to help economically empower 50 million women by 2025.