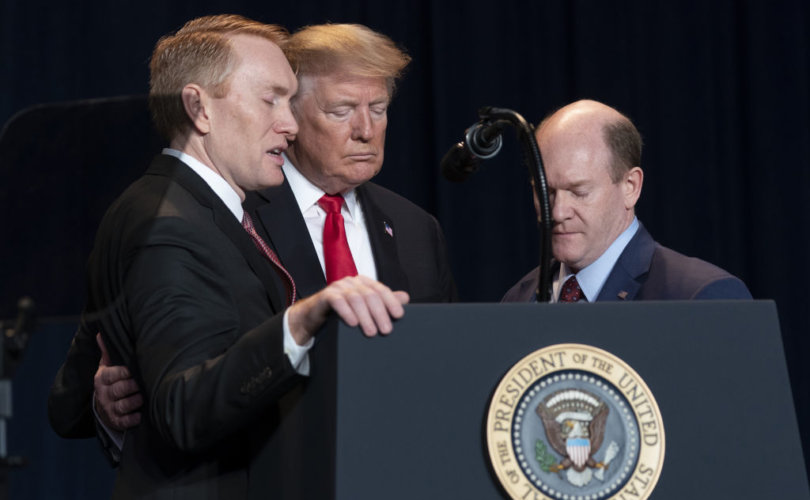 May 2, 2019 (LifeSiteNews) – There is nothing more powerful than prayer, President Donald Trump told a gathering of roughly 100 religious leaders and Trump Administration officials Wednesday night.

Gathered in the White House’s State Dining Room on the eve of the National Day of Prayer, Trump said the United States as a country would believe in prayer forever.

“America will be a nation that believes forever, and we certainly believe – more than anyone – the power of prayer,” Trump stated. “It's the most powerful thing there is.”

Trump welcomed representatives of varied faiths to the dinner; Christians, Muslims, Jews, Sikhs, and Hindus, and emphasized the importance of protecting religious freedom.

“Tonight we break bread together united by our love of God, and we renew our resolve to protect the sacred freedom of religion – all of us,” he said.

The president also recognized the recent religiously motivated attacks in the United States and overseas, a report from CBN News said, and called for an end to violence and terrorism against people of all faiths.

Trump recalled those lost in the Chabad of Poway shooting in a San Diego suburb Saturday, the Christians murdered in Sri Lanka Easter Sunday, and the dozens of Muslims murdered at two mosques in Christchurch, New Zealand in March.

He also cited the three historic black Louisiana churches burned over 10 days in late March and early April as well, along with the mass shooting last year at the Tree of Life Synagogue in Pittsburgh.

Trump has spoken about prayer and its importance at different times during his presidency, whether in association with the National Day of Prayer or independent of it.

The annual National Day of Prayer is a government-proclaimed day offered to Americans with a focus on the need to pray for the well-being of America and those in leadership at all levels of national, church and educational areas. The day is observed each year on the first Thursday of May.

Last year on the National Day of Prayer, Trump had said that “prayer changes hearts and transforms lives.”

“Our country was founded on prayer,” he said, “our communities are sustained on prayer and our nation will be renewed by hard work, a lot of intelligence, and prayer.”

“He’s someone who really believes in the power of prayer,” Pence said, “and in the importance of faith in American life.”

Also last year on the National Day of Prayer, Trump had signed an executive order creating a faith-based office in the White House to represent religious Americans’ rights and include them in policymaking.

In 2017 he signed an executive order on the day calling for national prayer that provided religious freedom protections for religious institutions objecting to paying for abortion, contraception and abortifacients and also protection for those who uphold the biblical definition of marriage.

On the morning of the 2019 National Day of Prayer Trump, announced the administration had finalized another set of administrative protections for religious Americans’ conscience rights for physicians, pharmacists, nurses, teachers, students and faith-based charities.

“Every citizen has the absolute right to live according to the teachings of their faith and the convictions of their heart,” Trump said.

In September of 2017 Trump declared a national Day of Prayer for victims of Hurricane Harvey.

In a sit-down interview with EWTN’s Raymond Arroyo shortly before his election to the U.S. presidency, Trump said prayer for him was something very personal.

When an elderly woman collapsed last November at one of his rallies held in Missouri, after asking for any doctors present in the house and telling emergency responders to take their time, Trump asked the crowd to “say a little prayer.”