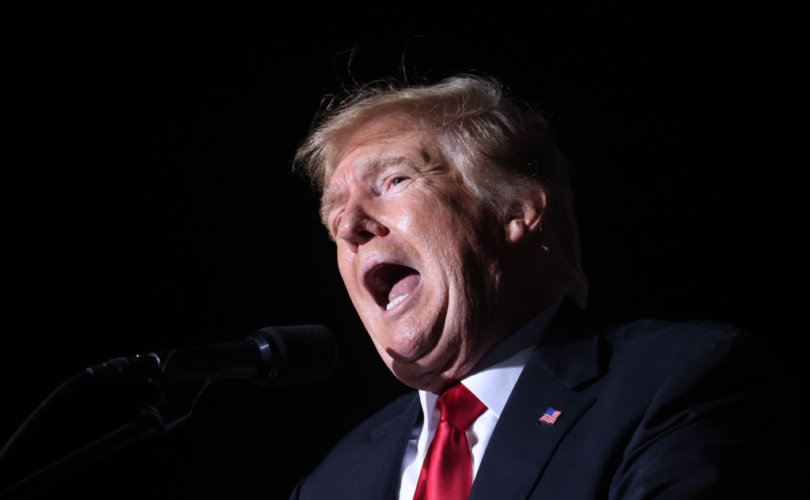 (LifeSiteNews) — After once again promoting the experimental, abortion-tainted COVID-19 jabs he helped rush through production, former President Donald Trump this week accused politicians who refuse to say whether they got a booster shot of being “gutless.”

Immediately after Trump’s comments, news outlets and commentators speculated that the remarks were deliberately aimed at Florida’s Republican Gov. Ron DeSantis, who has declined to say publicly whether he has received a third dose of the drug.

“I watched a couple of politicians be interviewed and one of the questions was, ‘Did you get the booster?’ because they had the vaccine, and they’re answering like, in other words, the answer is ‘yes,’ but they don’t want to say it, because they’re gutless,” Trump said during a January 11 interview with One America News Network (OANN), which has consistently aired coverage favorable to the former president.

“You got to say it, whether you had it or not, say it,” the former president added, once again affirming that he got a third jab in December.

“The fact is, I think the vaccine has saved tens of millions of people throughout the world,” Trump said, regardless of the fact that more Americans are reported to have died with COVID-19 listed on their death certificate in 2021 — following the roll-out of the shots — than in 2020 before the injections were available.

Axios and other outlets immediately connected Trump’s remarks slamming politicians for refusing to say whether they got boosted to comments made by DeSantis in December.

During an interview with Fox News’ Maria Bartiromo, DeSantis evaded answering whether or not he had received a booster shot.

“I’ve done whatever I did, the normal shot, and that at the end of the day is people’s individual decisions about what they want to do,” DeSantis said.

Fox Business’ Maria Bartiromo: “Have you gotten the booster?”

Gov. Ron DeSantis (R-FL): “So, uh, I’ve done, whatever I did. The normal shot. And that at the end of the day is peoples’ individual decisions about what they want to do.” pic.twitter.com/AJ6XF8UN5V

The governor’s press secretary Christina Pushaw also responded to questions about DeSantis’ dodge by noting that she was unable “to speak to his private medical decisions.”

DeSantis has long held the stance that choosing whether or not to get the COVID-19 jab is a personal decision and not one that should be forced by government or corporate actors. Last year the Sunshine State’s governor used a special legislative session to create legal protections for Floridians against forced vaccination, while consistently fighting against overreach by the federal government.

Following the U.S. Supreme Court’s decision to stay the Biden Administration’s federal injection mandate for businesses with 100 or more employees while upholding its mandate for healthcare workers, DeSantis’ office has announced its refusal to enforce the rule against Florida-based healthcare professionals, saying it will not “serve as the Biden Administration’s biomedical police.”

Meanwhile, there may be more to Trump’s comments than a mere criticism of DeSantis and other politicians who refuse to reveal their vaccination status.

While Trump didn’t call out DeSantis by name or make further charges against him, it has appeared obvious to many that he was intentionally striking out at the popular Florida governor since DeSantis would likely be Trump’s chief Republican rival should he choose to run in the next presidential election.

“2024 has already started,” opined Daily Wire podcaster Michael Knowles on Thursday. “Donald Trump, who has intimated that he’s interested in running again, is now taking shots at his political rivals.”

Many have seen DeSantis as a shoe-in for the Republican nomination for his deft handling of the COVID-19 pandemic in his state as well as his strong conservative stance on myriad national political issues. If Trump decides to run for office again, however, DeSantis would be forced to compete against the former president who retains a solid conservative following.

Moreover, as the COVID-19 jabs continue to drive a wedge between Americans, including conservatives, Trump and DeSantis would likely be compelled to take opposing stances on the injections. While Trump was responsible for rushing through the vaccine production via Operation Warp Speed, DeSantis has largely distanced himself from the shots and generated a strong following for fighting for individual liberty in the face of increasing jab mandates.

Meanwhile, Trump’s following has been noticeably shaken for his unflinching support of the injections, with audiences booing and heckling him on several occasions for publicly promoting the shots. Conservative skepticism of the injections could put DeSantis in a powerful strategic position against Trump.

“Trump is in this very difficult political spot, because he’s the man responsible for the vaccines, so he’s got to push it even though his base is very skeptical,” Knowles noted.

Meanwhile, the Catholic Daily Wire commentator took issue with Trump’s charge that politicians like DeSantis should disclose their vaccination status, arguing that no one should feel compelled to do so, especially in the current political climate.

“I think it’s very bad advice,” Knowles said. “We’re living in a biomedical security state right now. We’re now living in a place where you can be deprived [of] privileges and rights that you once had based on whether or not you’ve taken this experimental drug.”

“That doesn’t seem like a wise idea to go out and tell everyone whether or not you’ve had it,” Knowles said.