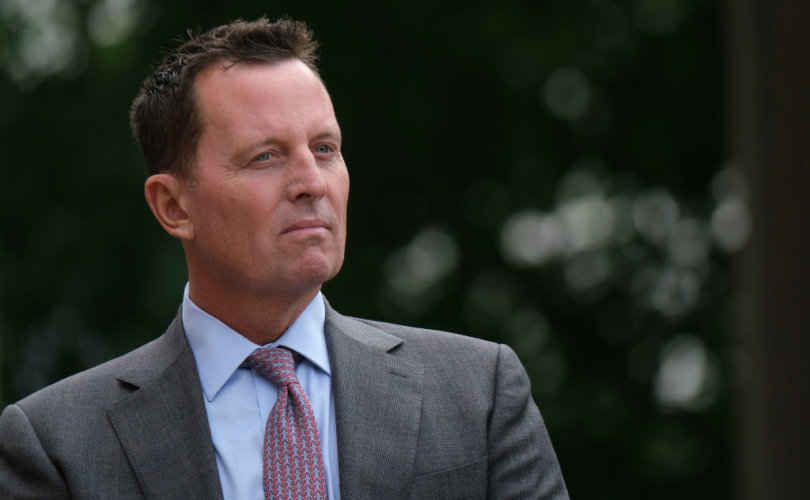 WASHINGTON, D.C., April 23, 2020 (LifeSiteNews) — The openly gay acting director of National Intelligence for the U.S., Richard Grenell, is expanding his mandate from President Trump to eliminate the death penalty for and otherwise decriminalize being gay around the world to include the normalization of homosexuality in the vast array of spy agencies he oversees.

In February, President Donald Trump tapped Grenell — who was already serving as United States ambassador to Germany — for the position, making him the first openly gay member of a White House Cabinet in history. He now holds both offices concurrently.

As intelligence head, Grenell oversees the nation’s seventeen intelligence agencies, including the Federal Bureau of Investigation (FBI), the Central Intelligence Agency (CIA), the Department of Homeland Security, and the intelligence arms of each branch of the U.S. military.

Sixty-nine countries currently criminalize homosexuality. Most are located in the Middle East, Africa, and Southeast Asia.

He has worked for pro-life causes at the U.N., holds traditional conservative views on many issues, and says he wants Christian conscience rights protected, but he is also a self-described “gay Christian” who advocates for same-sex “marriage” and has decried the influence of “loud religious right activists” in the conservative coalition.

Stuart Milk is the nephew of Harvey Milk, the murdered San Francisco supervisor who made history in the 1970s as California’s first openly homosexual elected official. Stuart now heads the Harvey Milk Foundation. He told the New York Times that he recently held a session at the Pentagon for employees of the National Security Agency, Defense Intelligence Agency, and other agencies.

That era may soon be coming to an end.

In a letter sent last week to all the agencies under his auspices, Grenell seemed to demand the complete normalization of homosexuality and transgenderism within all Intelligence Community (I.C.) operations.

“I am committed to doing more to detect and respond to all discrimination and harassment within the workforce,” he contniued. “I expect every IC agency to ensure policies are specific and deliberate in protecting the LGBT workforce.”

Finally, I ask you to remember that June is Pride Month. Although this year’s IC Pride Summit has been postponed, I look forward to hosting members, allies, and friends of the IC’s LGBT community in-person when we return to the new normal after COVID-19.