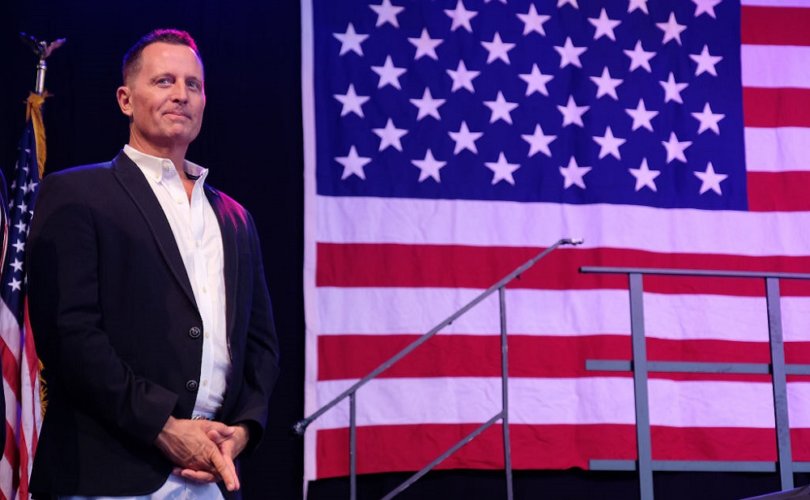 As intelligence head, Grenell will oversee the nation’s seventeen spy agencies, including the Federal Bureau of Investigation (FBI), the Central Intelligence Agency (CIA), the Department of Homeland Security, and the intelligence arms of each branch of the U.S. military.

“He’s not necessarily popular with LGBTQ people — or women or Germans,” declared a commentary in The Advocate, soon after Grenell’s appointment was announced. “He denounced gay Democratic presidential hopeful Pete Buttigieg for calling out Vice President Mike Pence’s anti-LGBTQ record” and said “the idea that Pence is homophobic is a ‘hoax.’”

The Advocate also noted that Grenell is “known for insulting powerful women, such as Hillary Clinton and Rachel Maddow, based on their appearance.”

Despite having earned the ire of liberals and having amassed immense credibility in conservative circles — he is seen as being in the image and likeness of Donald J. Trump — some conservative Washington observers wonder whether Grenell might harbor a hidden allegiance to advancing an LGBT agenda.

Grenell has worked for pro-life causes at the U.N., holds traditional conservative views on many issues, and says he wants Christian conscience rights protected, but he is also a self-described “gay Christian” who advocates for same-sex “marriage” and has decried the influence of “loud religious right activists” in the conservative coalition.

After leaving his position in the Bush administration as the United States’ United Nations spokesperson, he publicly condemned the Bush White House for opposing U.N. resolution urging the full acceptance of homosexuality.

Evangelical leader Gary Bauer, now a member of the U.S. Commission on Religious Freedom, said at the time that Grenell “is not weak on defense[.] … Conservative pro-family leaders are disappointed because Grenell has been an outspoken advocate of redefining normal marriage.”

“Grenell has made a particular crusade of the marriage issue, with a kind of unhinged devotion that suggests a man with questionable judgment,” wrote the Witherspoon Institute’s Matthew J. Franck in a National Review piece.

Franck worried that if Grenell were selected by Mitt Romney for an influential State Department posting, he might “pursue his passion for that same agenda.”

While the effort was said to be narrowly focused on criminalization instead of pressuring countries to adopt policies such as same-sex “marriage,” that may be a misrepresentation.

In a video interview with a fellow gay, Dave Rubin of the Rubin Report, published this week, Grenell perhaps admitted that he might be seeking more than just the decriminalization of homosexuality:

We’re making so much progress [with the decriminalization campaign].  Granted, this is going to be a long fight, trying to convince sixy-nine countries to do a change in domestic laws, to not criminalize homosexuality.

Grenell did not stop there.  He added:

And that’s all this is is ‘step one,’ is just to work on criminalization. Others are working on steps two to twenty.

Grenell did not explain what steps 2–20 might be, leaving plenty of room for interpretation by pro-marriage and pro-family conservatives.

“Right now I have to face at the State Department resistance from people who don’t want Americans or Westerners to go into other countries and take a stand for the decriminalization [of homosexuality] campaign, because literally there are countries that believe that the West — and specifically America — have imported into their country ‘being gay,’” he said.

Grenell said the suggestion that Americans introduced “being gay” to other countries is “the stupidest idea,” and so “I’m not actually going to be silent on that and participate in letting them silence me because they’ve got some crazy conspiracy theory.”

Conspiracies notwithstanding, some conservative leaders remain concerned and want to see Grenell’s effort’s limited to ending violence, not advancing an agenda.

“I have interacted with Ambassador Richard Grenell and appreciate his service to our country, but I’m concerned about his record of promoting same-sex marriage and values that have proven to endanger religious freedom,” Family Research Council pesident Tony Perkins told LifeSiteNews in an emailed statement.

There is concern among our pro-family allies around the world that Ambassador Grenell will engage in LGBT activism as Acting Director of National Intelligence, a cabinet-level position. An effort to impose the same redefinition of marriage upon other nations that was imposed upon Americans by an activist Supreme Court would be reminiscent of the cultural imperialism of the Obama administration.

Eight countries permit the death penalty for homosexuality — most of them also known as abusers of religious freedom and other rights, and supporters of terrorism. An end to those laws, and other physical punishments such as flogging, is a legitimate goal. But that does not mean we should engage in ‘cultural imperialism’ by imposing policies that were imposed upon us by our own Supreme Court on other countries with different cultures, traditions, and values.

Let’s find common ground in calling for an end to all forms of physical violence against homosexuals — but let’s refrain from imposing the values of the sexual revolution on the rest of the world.

“Rick Grenell has proven in his work for the Trump administration that he is a gay activist first and a loyal Republican second,” Peter LaBarbera, founder and president of Americans for Truth about Homosexuality, told LifeSiteNews. “He has made it his primary mission to work for the normalization of homosexuality worldwide, which would seem to be more of an Obama foreign policy goal than a Trump goal.”

“Through all this, as an open and proud homosexual,” said the AFTAH head, although “[h]e bills himself as an evangelical Christian. This only confuses the Gospel and undermines true, biblical Christianity.”

The New York Times noted that Grenell’s “bare-knuckled approach” to diplomacy “resonates with the president and his inner circle.” He is seen as an uncommonly aggressive, outspoken diplomat.

Grenell “has championed the ‘Trump Doctrine,’ defined as the approach of economically pressuring countries — including North Korea, Iran, and China — but leaving them a path to ‘change their behavior,’” noted a Fox News report.

“I absolutely want to empower other conservatives throughout Europe, other leaders,” Mr. Grenell told Breitbart in 2018. “I think there is a groundswell of conservative policies that are taking hold because of the failed policies of the left.”

Before being dispatched to Germany, Grenell was famous for trolling liberals on Twitter, described as “an ultra right-wing sniper on social media,” a moniker that could also be applied to the president.