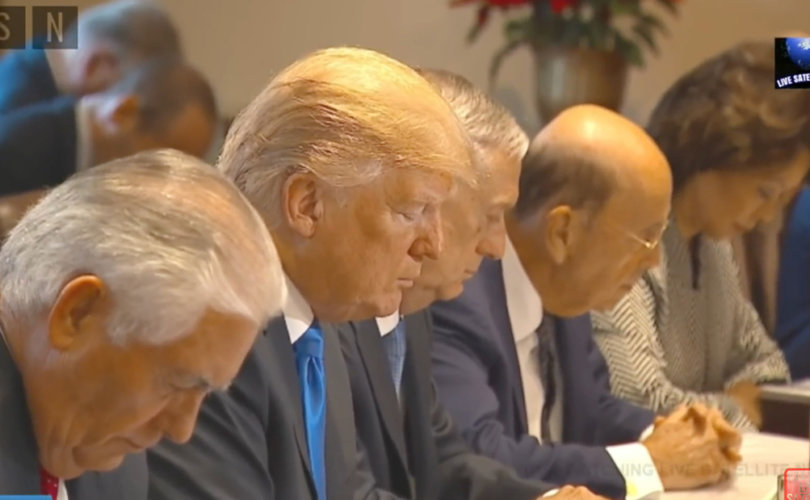 WASHINGTON, D.C., December 21, 2017 (LifeSiteNews) — President Donald Trump asked Secretary of Housing and Urban Development Dr. Ben Carson to lead prayer before a cabinet meeting, and invited the press to pray along because “You need the prayer more than I do, I think.”

“Maybe a good solid prayer and they’ll be honest, Ben, is that possible?” the president half-joked at the mainstream media’s expense.

Carson’s Trinitarian prayer addressed God the Father as “kind,” and focused on gratitude.  “We’re so thankful for the opportunities and the freedom that you’ve granted us in this country,” he prayed, as administration heads bowed and eyes closed.

The doctor’s intercession characterized President Trump and Cabinet members as “courageous” and “willing to face the winds of controversy in order to provide a better future.”

He expressed thankfulness for the party unity which passed Trump’s tax bill, which Carson predicted would expand the economy “so we can fight the corrosive debt that has been destroying our future.”

The HUD Secretary said he hoped that unity will “spread even beyond party lines, so that people recognize we have a nation that is worth saving, and recognize that nations divided against themselves cannot stand.”

“In this time of discord, distrust and dishonesty, we ask that you will give us a spirit of gratitude, compassion and common sense,” the neurosurgeon prayed.  “And give us the wisdom to be able to guide this great nation in the future.”

The explicitly Christian prayer was offered “in the Name of the Father, the Son and the Holy Spirit.”

Carson is a Seventh Day Adventist, and says he always prayed before operating on anyone.

You may watch the brief prayer and the president’s introduction here.

Christmas celebrates ‘the birth of our Lord and Savior Jesus Christ’: President Trump

President Trump: ‘We will be protected by God’