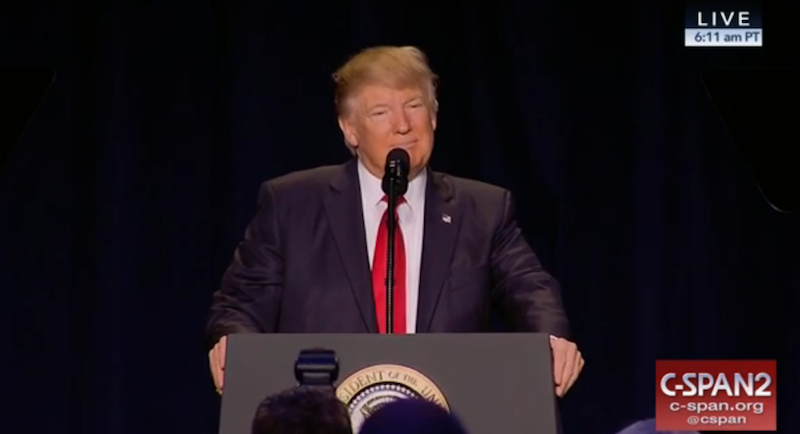 WASHINGTON, D.C., February 2, 2017 (LifeSiteNews) – At Thursday morning's National Prayer Breakfast, President Trump said the whole world has a duty to stop the “genocide” of Christians in the Middle East.

He blasted the terrorism that religious minorities face in some parts of the world, said we “must never, ever” stop asking God for wisdom, and declared that America will flourish “when religious liberty can flourish.”

“Freedom of religion is a sacred right,” President Trump said. He promised his administration “will do everything in its power to defend and protect religious liberty in our land” and around the world.

Editor's Note: Trump was introduced by Mark Burnett, MGM Television president, creator and producer of “The Bible” and the person who worked with him on “The Apprentice” program for 14 years. See Burnett's fascinating introduction of Trump (here in the full video of the Prayer Breakfast starting at 51:39) which explains why Trump referred to “The Apprentice” in his remarks.

He outlined the severity of threats to religious freedom around the world: “We have seen peace-loving Muslims brutalized, victimized, murdered, and oppressed by ISIS killers. We have seen threats of extermination against the Jewish people. We have seen a campaign of ISIS and genocide against Christians, where they cut off heads. Not since the Middle Ages have we seen that. We haven’t seen that – the cutting off of heads. Now they cut off the heads, they drown people in steel cages…Nobody’s seen this for many, many years.”

“All nations have a moral obligation to speak out against such violence,” he said. “All nations have a duty to work to confront it and to confront it viciously if we have to. So I want to express clearly today to the American people that my administration will do everything in its power to defend and protect religious liberty in our land. America must forever remain a tolerant society where all faiths are respected and where all of our citizens can feel safe and secure. We have to feel safe and secure.”

“We will be a country…where all citizens can practice their beliefs without fear of hostility or fear of violence,” said Trump. “America will succeed as long as our most vulnerable citizens…have a path to success…God will always give us solace and strength and comfort.”

Trump said he will “totally destroy” the Johnson Amendment, which threatens churches with the loss of their tax-exempt statuses for expressing certain political opinions. His speech also touched on the importance of caring for veterans, whose “vigilance has kept our liberty alive.”

Trump thanked the American people for their prayers, which “have sustained me and inspired me.”

Trump said the “five words that never, ever fail to touch my heart” are “I am praying for you.”

Many of the ultra-rich are “very, very miserable and unhappy people,” Trump said, while he's noticed the less wealthy who have their families are often happiest.

“Those to me are the successful people,” he said.

“God will always give us solace and strength and comfort,” he told the audience of American and foreign politicians and dignitaries.