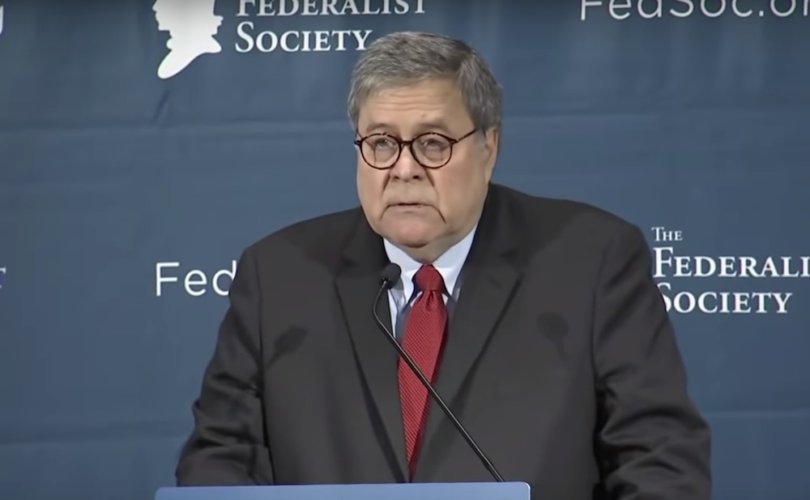 November 18, 2019 (LifeSiteNews) — U.S. attorney general William Barr delivered a forceful speech Friday to the annual National Lawyers’ Convention of the conservative Federalist Society, during which he argued that the left-wing “Resistance” to President Donald Trump is not mere partisan politics, but an assault on the American presidency’s constitutional role.

“Immediately after President Trump won election, opponents inaugurated what they called ‘The Resistance,’ and they rallied around an explicit strategy of using every tool and maneuver available to sabotage the functioning of his administration,” Barr said. “Instead of viewing themselves as the ‘loyal opposition,’ as opposing parties have done in the past, they essentially see themselves as engaged in a war to cripple, by any means necessary, a duly elected government.”

His first example was that, while it is the opposition party’s prerogative to vote against a president’s nominees, Senate Democrats have moved to “systematically oppose and draw out the approval process for every appointee so as to prevent the president from building a functional government,” to the point where the Republican majority has had to invoke cloture 236 times to proceed to a nomination vote (as opposed to just 17 cloture votes on President Barack Obama’s first-term nominees).

As Congress has “largely abdicated its core function of legislating on the most pressing issues facing the national government,” he continued, Democrats have instead spent that time “drown[ing] the Executive Branch with ‘oversight’ demands for testimony and documents.”

“I do not deny that Congress has some implied authority to conduct oversight as an incident to its legislative power,” the attorney general clarified. “But the sheer volume of what we see today — the pursuit of scores of parallel ‘investigations’ through an avalanche of subpoenas — is plainly designed to incapacitate the Executive Branch, and indeed is touted as such.”

Among the consequences of this “harassment,” he argued, is a politicized regime for the release of private Executive Branch communications, which has the federal government “devoting enormous resources to squabbling about what becomes public and when, rather than doing the work of the people.”

The attorney general also devoted a portion of his remarks to the federal Judiciary, an unelected branch that has been a source of recurring consternation to the Trump administration and to conservatives generally.

“The Framers did not envision that the Courts would play the role of arbiter of turf disputes between the political branches,” Barr said, yet today the Judiciary has “usurped presidential authority for itself, either (a) by, under the rubric of ‘review,’ substituting its judgment for the Executive’s in areas committed to the president’s discretion, or (b) by assuming direct control over realms of decision-making that heretofore have been considered at the core of presidential power.”

“The Travel Ban case is a good example,” he continued. “There the president made a decision under an explicit legislative grant of authority, as well has his constitutional national security role, to temporarily suspend entry to aliens coming from a half-dozen countries pending adoption of more effective vetting processes. The common denominator of the initial countries selected was that they were unquestionable hubs of terrorism activity, which lacked functional central government’s and responsible law enforcement and intelligence services that could assist us in identifying security risks among their nationals seeking entry. Despite the fact there were clearly justifiable security grounds for the measure, the district court in Hawaii and the Ninth Circuit blocked this public safety measure for a year and half on the theory that the president’s motive for the order was religious bias against Muslims.”

Barr also cited the example of the controversial Deferred Action for Childhood Arrivals (DACA) policy, by which Obama waived deportations for a certain class of illegal immigrants without statutory authority to do so. Despite the policy having been created by executive order, the courts have blocked Trump from simply reversing the policy via the exact same means.

“On the same day the President invited cameras into the Cabinet Room to broadcast his negotiations with bipartisan leaders from both Houses of Congress” on the issue,” he continued, “a district judge in the Northern District of California enjoined the rescission of DACA nationwide.” Negotiations collapsed, a “humanitarian crisis at the southern border ensued,” and the U.S. Supreme Court “will not likely decide the case until next summer, meaning that President Trump will have spent almost his entire first term enforcing President Obama’s signature immigration policy, even though that policy is discretionary and half the Supreme Court concluded that a legally indistinguishable policy was unlawful.

“That is not how our democratic system is supposed to work,” Barr warned.

“The fact of the matter is that, in waging a scorched earth, no-holds-barred war of ‘Resistance’ against this administration, it is the Left that is engaged in the systematic shredding of norms and the undermining of the rule of law,” Barr declared. “Their holy mission is to use the coercive power of the State to remake man and society in their own image, according to an abstract ideal of perfection. Whatever means they use are therefore justified because, by definition, they are a virtuous people pursing a deific end. They are willing to use any means necessary to gain momentary advantage in achieving their end, regardless of collateral consequences and the systemic implications.”