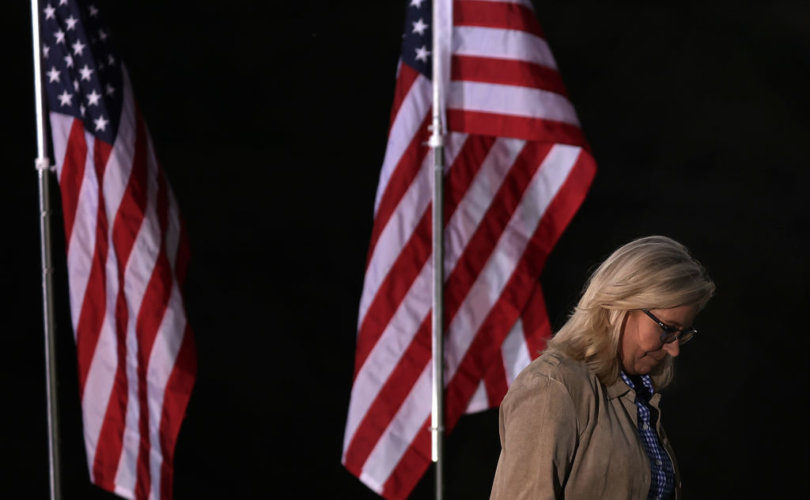 JACKSON, Wyoming (LifeSiteNews) – Congresswoman Liz Cheney, who has staked her reputation in recent years on being a staunch opponent of former President Donald Trump, lost her primary on Tuesday against Trump-backed candidate Harriet Hageman.

Cheney, the daughter of former Vice President Dick Cheney, is down almost 40 points with 99 percent of the votes counted, according to The Washington Post.

Once a fast rising star in the Republican Party, who even voted with Donald Trump 93 percent of the time, Cheney soon found herself ousted from GOP leadership in May 2021 due to her increasingly anti-Trump sentiment, including a vote to impeach the outgoing president over the violence at the Capitol on January 6, 2021. She has also moved to the political left, voting in favor of same-sex “marriage.”

She represented the neoconservative wing of the party that favored heavier military intervention across the world, after first being elected in 2016.

Cheney’s position on Trump won the praise of liberal Speaker of the House Nancy Pelosi, who handpicked her to serve on a new January 6 committee.

What followed was a year’s worth of partisan crusades against the former president and his supporters with the ultimate end goal being to prevent Trump from seeking re-election in 2024 by sullying his public image further after two impeachments, a failed special counsel investigation, and years’ worth of organized opposition across both public and private sector entities failed to reduce his rock-solid support among an uncommonly immovable bloc of the American electorate.

In many respects, this was the straw that broke the camel’s back for Cheney, who now found herself (1) entirely ostracized from her party on Capitol Hill and utterly rejected by its pro-Trump base, and (2) a primary target not only for the still politically-inclined Trump going into 2022, but also for potential successors and voters alike in Wyoming, all of whom felt abandoned by the Congresswoman they chose to be their voice in Washington for three consecutive terms.

RELATED: ‘Desperate’ Liz Cheney appears to be headed toward a shellacking in GOP primary

The New York Times noted that Cheney has set her focus on stopping Trump from becoming president again in 2024 and that she herself may run for the White House.

“She has set her sights beyond Wyoming, arguing that blocking Mr. Trump’s return to the White House is her most important task, a mission that has fueled speculation that she’s considering a presidential bid,” the Times reported Tuesday after the election results were known.

In her concession speech, Cheney compared herself to Abraham Lincoln, who also lost a House and Senate race (Cheney attempted to run for Senate in 2014).

But wait, she’s not done yet.

Liz Cheney went on to compare her fight to never let Trump become president again to Ulysses S. Grant marching south in the Battle of the Wilderness. pic.twitter.com/CnZzkpdyil

Trump celebrated the victory of his endorsed candidate.

“Liz Cheney should be ashamed of herself, the way she acted, and her spiteful, sanctimonious words and actions towards others,” Trump wrote in a statement posted on his social media platform Truth Social. “Now she can finally disappear into the depths of political oblivion where, I am sure, she will be much happier than she is right now.”

A spectrum of politicians and commentators praised the defeat of Cheney.

“It appears that Liz Cheney, one of the GOP’s chief warmongers, is about to lose. This is good news for every American regardless of party,” former Hawaii Democratic Congresswoman Tulsi Gabbard tweeted.

Senator Rand Paul (R-KY) also celebrated Cheney’s defeat. “Few people in Washington have been as wrong and damaging on foreign policy as Liz Cheney. Congratulations to @HagemanforWY on her victory tonight. I look forward to working with an advocate for liberty as the next Congresswoman from Wyoming. Bye Liz.”

“Tonight is a great night for our nation and a victory for our movement. Even prior to her vote for impeachment, Liz Cheney was one of the most malign influences within the GOP,” Republicans for National Renewal wrote. “Now, her (& her father’s) brand of endless warmongering has been categorically rejected.”