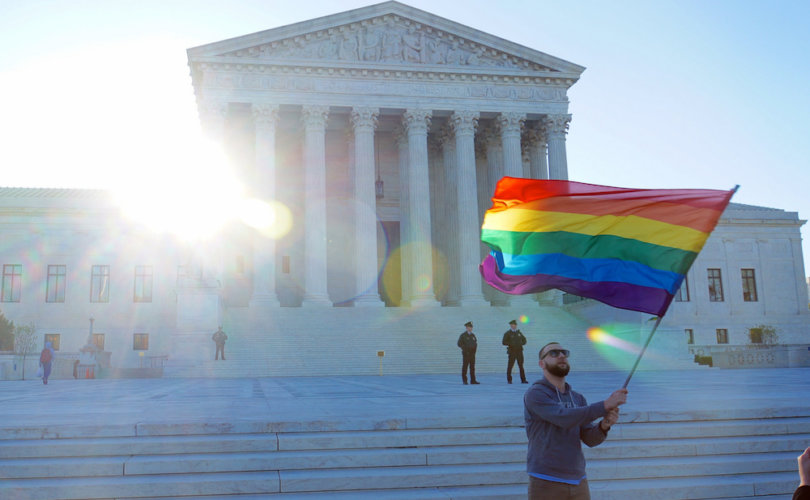 May 2, 2017 (LifeSiteNews) — President Trump is not celebrating June as “LGBT Pride Month” with an official proclamation, like his predecessor Barack Obama did every year, although various federal agencies are still holding “pride” events and making pro-LGBT statements.

The Washington Blade, a newspaper for homosexuals in the nation’s capital, reports that Trump is “breaking with a tradition started under the Obama administration” by not issuing the “gay pride” declaration, which irked social conservatives year after year in the beginning of June.

In what is obviously a bitter pill for homosexual and gender-confusion (“transgender”) activists to swallow, the Blade reports that “Trump on the last day of May issued five separate proclamations recognizing June as National Caribbean-American Heritage Month, African-American Music Appreciation Month, National Homeownership Month, Great Outdoors Month and National Ocean Month. Absent from the list was anything related to [homosexual-transgender] Pride.”

Nonetheless, Trump is not putting a stop to various federal agencies and branches of the Armed Services celebrating June as LGBT Pride Month, as many social conservatives have called on him to do. As LifeSiteNews reported last week, the U.S. Army Surgeon General and Commanding General of the Army Medical Command, Lt. Gen. Nadja West, issued an “LGBT Pride Month” statement.

Earlier, the State Department posted a pro-homosexual “pride” essay on its website, and U.S. Embassy in Macedonia flew the homosexual-activist “rainbow flag” beneath Old Glory to celebrate an annual LGBTQ activist day. (Under Obama, American Embassies from Spain to Israel repeatedly flew the homosexuality-celebrating flag abroad in this manner.)

Homosexual activist Joe Jervis today tweeted out a link to an item about the U.S. Navy supporting “LGBT Pride Month.” And DoD Pride, an LGBT group for Defense Department employees, is advertising an LGBT pride event in a Pentagon courtyard June 12.

The DoD celebrations of homosexual- and gender confusion (“transgender”) pride go against the recommendation of a coalition of conservative leaders, who on May 16 called on the Trump administration to “discontinue funding and directing personnel resources for special-interest events, including LGBT-Pride Month events in June, which do not strengthen military readiness.”

Despite President Trump’s silence (so far) on homosexual “pride month,” his daughter and key White House adviser, Ivanka Trump, yesterday tweeted in support of LGBT pride month, even mentioning the Jewish holiday Shavuot as she did so.

Ivanka and her husband, Jared Kushner, who is also a presidential adviser, claim affiliation with orthodox Judaism but have been criticized by Orthodox Jewish leaders for their strong, public support of the homosexual agenda and same-sex “marriage.”

In 2011, the New York power couple co-hosted a “gay” organization’s fundraiser for legalizing homosexual “marriage” in the Empire State. The sexual sin of homosexual behavior has long been taught as an abomination in serious Jewish orthodox circles. Ivanka converted to the ancient religion in 2009 before her marriage to Kushner.

Ex-’gay’ man says ‘pride’ is about ‘justifying your behavior’

Greg Quinlan, a former homosexual turned Christian and one-time “gay” activist, applauded Trump for not recognizing “LGBT pride month.” He said “pride” events for homosexuals are all about self-rationalization.

“All the pride movement is about is trying to justify your behavior. It’s a desire to be affirmed in what you’ve decided to be — not ‘who you are’ — and your sexual behavior,” said Quinlan, founder and president of the pro-family group Garden State Families, in New Jersey.

Quinlan, who was once an activist with the LGBTQ pressure group Human Rights Campaign, told LifeSiteNews, “For the last 30 years, the LGBT movement has worked diligently to make sure there were activists inside DoD and the federal government. Meanwhile, Christians were mostly silent or even backed away from getting involved in government. We basically handed the gay lobby a victory by doing nothing.”

Back in the 1980s, Quinlan had attended “gay pride” parades in Columbus, Ohio, and San Francisco, he said.

Regarding Ivanka Trump’s tweeting in celebration of “gay pride,” Quinlan said, as if addressing Ivanka: “Don’t you know that your support of the LGBTQ movement is hurting your father? The gay activists don’t care about your support now that you have an ‘R’ [for Republican] after your name.”