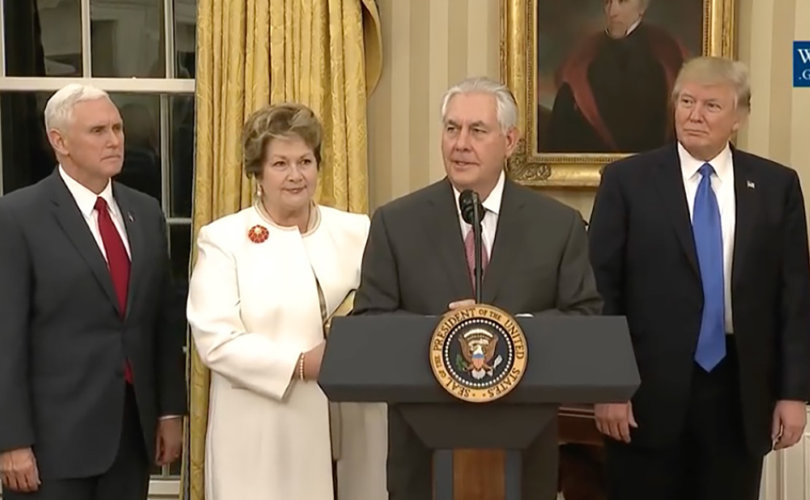 The move follows other funding cuts to global abortion programs including reinstitution of the Mexico City Policy and pulling U.S. funding from the United Nation Population Fund.

“Aid programs are an important part of our diplomatic efforts around the world, said Secretary Tillerson defending the proposed foreign policy cuts. “We want to protect those but we want to deliver them effectively.”

Trump’s budget proposal if approved by Congress would reduce the State Department and the Agency for International Development (USAID) by twenty eight per cent, requiring cuts to duplicative positions across multiple agencies.

More than half of the thirty positions in the Global Women’s Issues office already exist elsewhere within the State Department. An Obama executive action in 2009 created the Office of Global Women’s Issues (GWI) along with a new ambassador-at-large position initially filled by Melanie Verveer, a feminist and lifelong friend of then Secretary of State Hillary Clinton.

The gender office is a non-statutory office with an $8.25 million annual budget that historically directed $240 million in programs, most notably by getting other U.S. agencies to advance sexual rights abroad in traditional African and Arab countries. These initiatives have little transparency or congressional oversight. Programs funded under the gender office are at the discretion of the gender ambassador and fall outside the guidelines of the Mexico City Policy, which only applies to global health funding.

This latest Trump administration proposal to eliminate funding to the gender office is necessary so the U.S. does not undercut its own pro-life policy by indirectly channeling funding to abortion groups through public/private partnerships schemes within the GWI office.

Critics wasted no time blasting President Trump for the proposed cut to the office and criticized first daughter Ivanka Trump for her recent comments in support of women empowerment and entrepreneurship at an international W-20 summit in Berlin this week.

“Talk is cheap when you don’t fund the efforts you tout. It’s clear that women’s empowerment and gender equality are on the chopping block in this budget,” wrote Paul O’Brien Oxfam America’s Vice President for Policy and Campaigns. The head of Amnesty International’s Identity and Discrimination Unit called it a “middle finger.”

With the infusion of LGBT and abortion rights into U.S. foreign policy under the Obama administration, aid-dependent countries are now suspicious of women’s empowerment and gender equality programs initiated by Western governments and multilateral organizations.

At a recent UN conference on Population and Development African and Arab states criticized the imposing of sexual rights within the development framework. Consensus on an outcome document failed due to the insertion of controversial sexual rights language by European countries. Diplomats from developing nations said what women and children need for empowerment is access to education, healthcare and economic opportunity.

This article was originally published in the C-Fam Friday Fax and is re-published with permission.