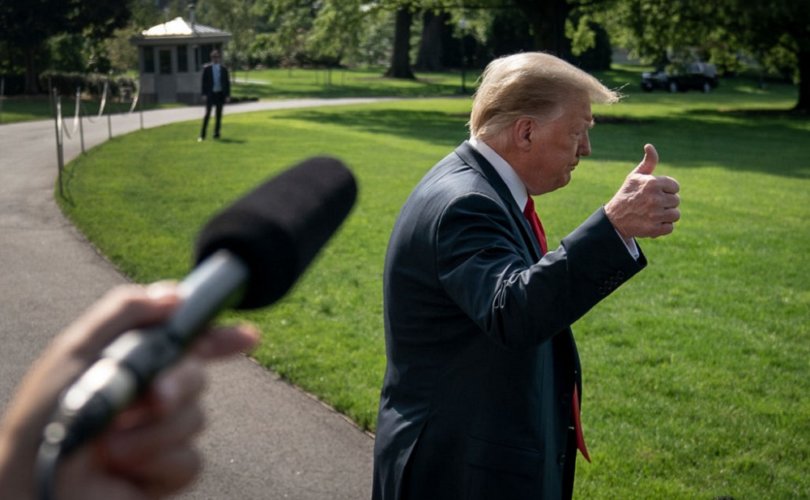 WASHINGTON, D.C., June 23, 2020 (LifeSiteNews) – Donald Trump has praised Archbishop Carlo Maria Viganò for his open letter to the U.S. president on the “children of darkness” and the “deep state,” explaining, “He’s right in what he says.”

In his powerful letter, the former apostolic nuncio to the United States had warned the president that the current crises over the coronavirus pandemic and the George Floyd riots are part of the eternal spiritual struggle between the forces of good and evil. Viganò had encouraged Trump to continue the fight on behalf of the “children of light.”

“In society, Mr. President, these two opposing realities co-exist as eternal enemies, just as God and Satan are eternal enemies,” wrote Viganò. “And it appears that the children of darkness — whom we may easily identify with the deep state which you wisely oppose and which is fiercely waging war against you in these days — have decided to show their cards, so to speak, by now revealing their plans.”

On June 10, the president had already tweeted, “So honored by Archbishop Viganò’s incredible letter to me. I hope everyone, religious or not, reads it!”

During a wide-ranging interview with EWTN’s Raymond Arroyo, the president characterized his letter as “a tremendous letter of support from the Catholic Church.”

“It was beautiful,” he added. “It was really three pages long, and it was a beautiful letter, and I appreciated it. Yeah, but he’s right in what he says.”

“I think he’s a great gentleman,” Trump said of Viganò. “He’s highly respected, as you know.”

Contrasting the praise in Abp. Viganò’s letter is a history of criticism from Pope Francis, who once evoked Herod in a talk about border security in “other parts” of the world and explicitly drew a parallel between the president’s border security policies and the Berlin Wall. When the pope and the president met in May of 2017, Francis presented Trump with copies of his encyclicals on the environment and adultery among other written works bearing the pontiff’s name.

The president addressed accusations that he is less pro-life than Democratic presidential candidate Joe Biden, given the latter’s support for ending the death penalty and his willingness to address the issue of climate change.

“I am totally in favor of the death penalty for heinous crimes,” Trump emphasized. “That’s the way it is.”

“I’m pro-life, he’s not,” he continued, talking about Biden. “And the Democrats, look who he’s putting on the court. They want to put people on the court, you have no chance.”

Trump referred to remarks made by the Democratic governor of Virginia, who had said in 2019 that doctors should be free to refuse to resuscitate an infant born alive after a failed abortion, “if that’s what the mother and the family desire.”

Trump described this as an “execution,” adding, “That’s the Democrats. And that’s Biden.”

The president also talked about the tearing down of statues by rioters in recent weeks, including statues of Catholic missionary St. Junipero Serra, who protected the indigenous people of California.

“Most of these people don’t even know what they’re taking down,” according to the president.

He promised to issue an executive order making the cities “guard their monuments.”

Talking about the riots taking place in various cities across the country, Trump said, “I want people to watch just for a little while.”

According to Trump, “They don’t know what they’re doing.”

Without elaborating on it, the president said he “did things that you don’t know about” to save many statues.

On Monday, the Supreme Court, led by Trump nominee Neil Gorsuch, redefined the term “sex” in the 1964 Civil Rights Act to mean not simply “male” and “female” as biological facts, but also “sexual orientation” and “gender identity.”

Among many others, Princeton University legal scholar Robert P. George referred to the ruling as “legislation,” predicting it to have “far-reaching consequences, including the eventual destruction of all-women’s sports.”

Other topics covered during the interview include police reform, Trump’s achievements for the black community, the comparatively low attendance at his rally in Oklahoma last week, the coronavirus restrictions, and John Bolton’s book about his time in the White House.