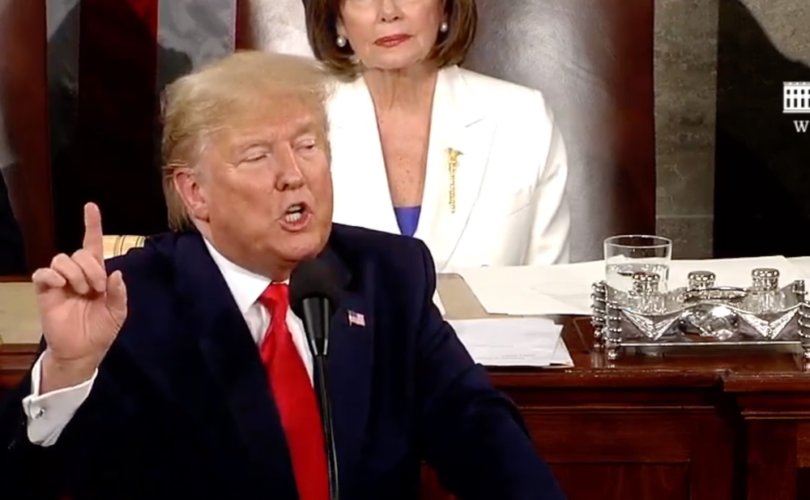 WASHINGTON, D.C., February 4, 2020 (LifeSiteNews) – President Donald Trump reiterated his call for a ban on late-term abortion during his annual State of the Union address Tuesday evening, while drawing the country’s attention to a living, smiling example of the children who could have been be legally killed had their mothers made a different “choice.”

“As we pray for all who are sick, we know that America is constantly achieving new medical breakthroughs. In 2017, doctors at St. Luke’s hospital in Kansas City delivered one of the earliest premature babies ever to survive,” the president said, referencing two of his special guests in attendance.

“Born at just 21 weeks and six days and weighing less than a pound, Ellie Schneider was a born fighter. Through the skill of her doctors and the prayers of her parents, little Ellie kept on winning the battle of life. Today Ellie is a strong, healthy two-year-old girl, sitting with her amazing mother Robin in the gallery. Ellie and Robin, we are glad to have you with us tonight.”

“Ellie reminds us that every child is a miracle of life, and thanks to modern medical wonders, 50 percent of very premature babies delivered at the hospital where Ellie was born now survive,” Trump continued. “Our goal should be to ensure that every baby has the best chance to thrive and grow just like Ellie. That is why I’m asking Congress to provide an additional $50 million to fund neonatal research for America’s youngest patients.”

“That is why I’m also calling upon members of Congress here tonight to pass legislation finally banning the late-term abortion of babies,” Trump declared. “Whether we are Republican, Democrat or independent, surely we must all agree that every human life is a sacred gift from God.”

The Pain-Capable Unborn Child Protection Act, which would ban abortions starting at 20 weeks, would require Republicans retaking the US House of Representatives in November, and Republicans to either win a 60-vote Senate majority or modify the current filibuster rules.

Trump’s remarks were the latest demonstration of his support for the pro-life cause, and a reminder of how far the former celebrity businessman has come since his conversion from conventional New York liberal to Republican political candidate.

Last month, Trump became the first sitting president to address the March for Life in person, telling hundreds of thousands of pro-lifers he was “proud to stand with you” to “protect the right of every child, born and unborn, to fulfill their God-given potential.”

“All of us here today understand an eternal truth: every child is a precious and sacred gift from God,” Trump said. “Together we must cherish and defend the sanctity and dignity of human life. When we hold a newborn in our arms, we know the boundless love a child brings to a family,” he said.

“Together we are the voice for the voiceless,” he went on. “Democrats have embraced the most radical and extreme positions we’ve seen in decades” on the issue, citing Congressional Democrats’ support for late-term abortion and opposition to mandating medical care for newborns that survive abortions.

“To all the women here today, your devotion uplifts our entire nation and we thank you for that,” the president said. “To all of the moms here today, we celebrate you and we declare that mothers are heroes. Every person is worth protecting and we know that every human soul is divine and every human life born and unborn is made in the holy image of almighty God.”