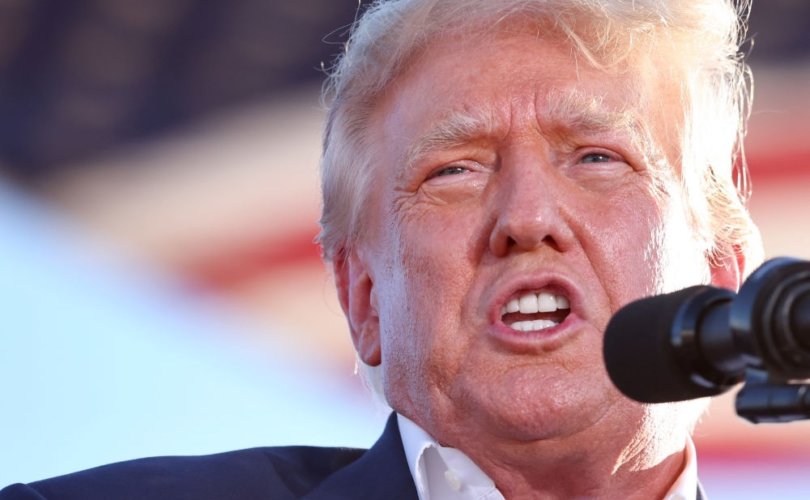 (LifeSiteNews) — Former U.S. President Donald Trump on Friday issued an official response to the January 6 Committee’s Thursday decision to subpoena him in connection with the riot at the U.S. Capitol, expressing his “anger” and “disappointment” that the committee has spent “hundreds of millions of dollars” on a “Charade and Witch Hunt.”

The January 6 Committee of the U.S. House of Representatives on Thursday voted 9-0 to subpoena Trump “for documents and testimony in connection with the January 6 attack on the United States Capitol,” LifeSiteNews reported.

On Friday, Trump issued a 15-page memo addressed to committee Chairman Bennie Thompson in which he argued the committee should have directed resources to investigating voter fraud during the 2020 election rather than targeting people “protesting the Fraud itself.”

“The Unselect Committee has perpetuated a Show Trial the likes of which this Country has never seen before,” Trump said.

Former President Trump responded to the #Jan6Committee’s vote to subpoena him with less than a month to go before the #Midterms2022. https://t.co/1NhGcJZCXL

‘[D]espite strong and powerful requests, you have not spent even a short moment on examining the massive Election Fraud that took place during the 2020 Presidential Election, and have targeted only those who were, as concerned American Citizens, protesting the Fraud itself,” Trump wrote, arguing that the perpetrators of voter fraud continue to “go unblemished and untouched.”

Criticizing the January 6 Committee as a “Show Trial” that has drawn “very poor television ratings,” Trump said the investigatory body has operated without due process, cross-examination, or even “real” Republican members.

“It is a Witch Hunt of the highest level, a continuation of what has been going on for years,” the former president wrote, going on to provide an exhaustive state-by-state argument suggesting that widespread voter fraud occurred in the 2020 election.

Trump’s memo comes after he responded to the committee’s decision via his social media platform Truth Social on Thursday afternoon, asking why the Committee didn’t ask him to testify earlier.

“Why did they wait until the very end, the final moments of their last meeting?” Trump asked, suggesting the “Committee is a total ‘BUST’ that has only served to further divide our Country … ”

The January 6 Committee’s decision to subpoena Trump came during the committee’s last scheduled public hearing ahead of the 2022 midterm elections, and just months after the Biden administration’s DOJ carried out an unprecedented raid on Trump’s Florida home.

The Epoch Times suggested the move to subpoena Trump is unlikely to find success as “it will likely prompt legal challenges from Trump’s attorneys.”

In addition, the outlet pointed out that the subpoena is slated to expire at the close of the current Congress in just a few months on January 3, 2023.

Democrats and left-leaning Republicans have attempted to prove that Trump orchestrated the January 6 riot, which broke out after Trump’s “March to Save America” rally, for well over a year.

Meanwhile, the Biden administration has consistently demonized Trump and his supporters as “threats to Democracy,” using the riot at the Capitol on January 6 as a political tool to go after conservatives.

In recent months, the Biden administration has weaponized its federal law enforcement resources to go after not only Trump, but his political allies and conservative Americans.