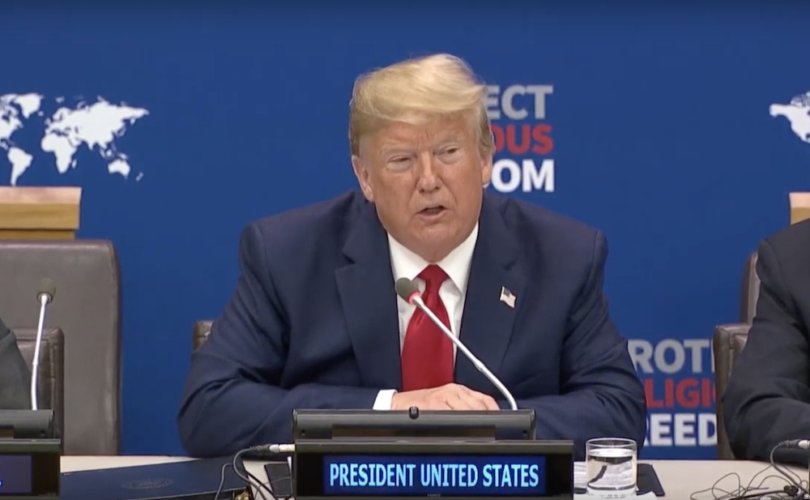 NEW YORK, September 23, 2019 (LifeSiteNews) – President Donald Trump became the first U.S. president to host a United Nations meeting on religious freedom, telling the international body that America “stands with believers in every country who ask only for the freedom to live according to the faith that is within their own hearts.”

Joined by Vice President Mike Pence, Secretary of State Mike Pompeo, and various government officials and religious leaders, the president used his remarks to detail his administration’s efforts to promote religious liberty abroad and raise awareness of persecution, as well as highlight the tendency of self-styled “diversity” champions to neglect those trying to live their faith.

“Too often, people in positions of power preach diversity while silencing, shunning, or censoring the faithful,” Trump said. “True tolerance means respecting the right of all people to express their deeply held religious beliefs.”

“The United States is founded on the principle that our rights do not come from government; they come from God,” he noted. “Our Founders understood that no right is more fundamental to a peaceful, prosperous, and virtuous society than the right to follow one’s religious convictions.” Yet the “religious freedom enjoyed by American citizens is rare in the world,” he said, to the point where “approximately 80 percent of the world’s population live in countries where religious liberty is threatened, restricted, or even banned.”

“In 2016, an 85-year-old Catholic priest was viciously killed while celebrating Mass in Normandy, France,” Trump lamented. “In the past year, the United States endured horrifying anti-Semitic attacks against Jewish Americans at synagogues in Pennsylvania and California. In March, Muslims praying with their families were sadistically murdered in New Zealand. On Easter Sunday this year, terrorists bombed Christian churches in Sri Lanka, killing hundreds of faithful worshippers.”

“These evil attacks are a wound on all humanity,” Trump continued. “We must all work together to protect communities of every faith. We’re also urging every nation to increase the prosecution and punishment of crimes against religious communities.”

Trump touted the actions his administration has taken to promote religious liberty, including a plan to create an “International Religious Freedom Alliance” of “like-minded nations devoted to confronting religious persecution all around the world,” appointing a “special envoy to monitor and combat anti-Semitism,” and the formation of a coalition of American businesses that will “encourage the private sector to protect people of all faiths in the workplace.” He also announced an additional $25 million will go toward the protection of “religious sites and relics.”

The president also said he was “very proud to say that we’ve obliterated the Johnson Amendment,” which forbids partisan activity from churches, “so that now we can listen to the people that we want to listen to — religious leaders — without recrimination against them.” However, while Trump signed an executive order directing the Treasury department to exercise leniency in enforcing the amendment, it remains on the books and cannot be “obliterated” without an act of Congress.

Trump also highlighted the administration’s role in securing the release of Andrew Brunson, the Protestant pastor who spent almost two years in a Turkish prison until his release last year. Brunson was in attendance at the event.

“We did a good job with that negotiation, Andrew,” the president said. “You got back. It wasn’t easy. It wasn’t pretty. But you got back. And we’re proud of you. You have a great family. And the love — when Andrew came back, the love from so many people, it was — actually, I hadn’t seen anything quite like it.”

“Today, I ask all nations to join us in this urgent moral duty,” Trump concluded. “We ask the governments of the world to honor the eternal right of every person to follow their conscience, live by their faith, and give glory to God. The United States has a vital role in this critical mission.”

Social conservative leaders hailed the president for his remarks.

“The president delivered a historic speech that goes beyond talking about international religious freedom to taking tangible steps that will lead to people of all faiths being able to securely and publicly worship,” Family Research Council president Tony Perkins said. “Not only is religious freedom a fundamental human right, as recognized by the United Nations' Universal Declaration of Human Rights, but there is a growing body of research that shows that nations that uphold religious freedom have greater social and economic security – which indirectly makes all nations more secure, including the United States.”

“President Trump has an outstanding record defending religious liberty thus far,” First Liberty Institute chief of staff Mike Berry said. “Our Founders understood that no nation can long survive without freedom of conscience and vigorous free exercise of faith. If America is to be a city on a hill, our commitment to religious liberty must continue to serve as a model to the rest of the world.”