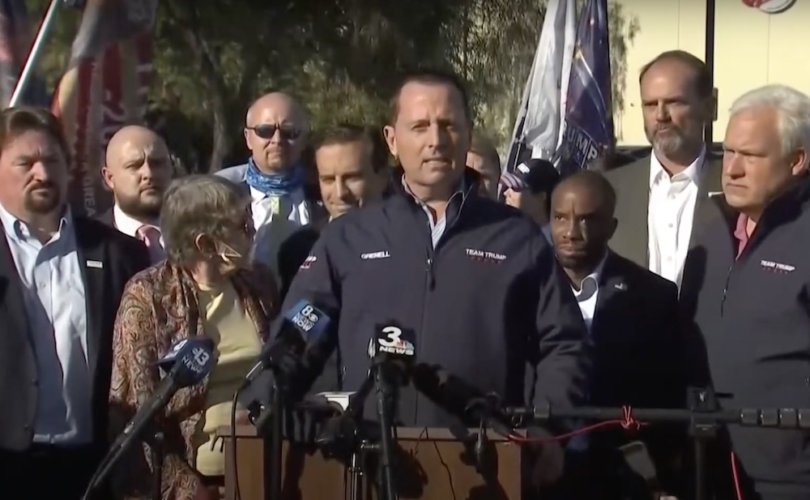 LAS VEGAS, November 5, 2020 (LifeSiteNews) – The Trump campaign announced Thursday it is seeking an emergency injunction to pause the counting of ballots in Nevada, due to various reports of alleged fraud as well as refusal to allow Republican poll watchers to observe the counting.

“We knew these [voter] rolls are unclean,” former state Attorney General Adam Laxalt said at a press conference in Nevada. “We were told that signatures would save us from fraud, but to date, we have not been able to observe these signatures or challenge any examples of potential fraud.”

“Transparency is not political,” declared former Acting Department of National Intelligence director Ric Grenell. “Ballots are not legal votes until they’re checked. We have not been allowed to check […] we are filing this federal lawsuit to protect legal voters.

The Trump campaign says it has seen evidence of votes being counted in the name of dead residents, along with non-residents and residents who have not lived in the state for the required 30-day minimum. This is “publicly available evidence that you all in the media are able to check,” Grenell challenged the reporters covering the event.

Also present at the press conference was resident Jill Stokke, who says she was denied her right to vote after being told she had already cast a ballot. KLAS reports that the 79-year-old woman, who is blind and needs help filling out ballots, says she went to vote in-person after never receiving her mail-in ballot, only for Clark County election officials to tell her, “You can’t vote because your signature matched. I said, ‘It couldn’t match, because I didn’t vote.’”

“A lawyer told me they probably won’t let me because their machine shows I’ve already voted,” Stokke said. “I know I did not vote and I’m not going to have this taken away from me.”

“We don’t know how [many] bad voters there are in this giant stack,” Laxalt told Fox News’ Tucker Carlson the night before. “We also know there are likely to be dead voters. There are likely to be people that have moved out of Las Vegas but found their ballots were still cast. So we’re looking into all of this.” Laxalt says that without mail-in voters, Trump would win the state “convincingly.”

The announcement follows the president declaring victory early Wednesday morning, accusing Democrats of perpetrating a “fraud on the American people” on behalf of former Vice President Joe Biden, and vowing to go to the US Supreme Court if necessary to stop a potential effort to steal the election.

The Trump campaign has already requested a recount in Wisconsin while directing his legal team to intervene in Michigan, where the campaign says it was denied “meaningful access to numerous counting locations to observe the opening of ballots and the counting process” (and where reports have emerged of postal workers backdating late ballots); and in Pennsylvania, where cases have been reported of voters apparently registered to vote using the addresses of vacant lots rather than valid residences. A judge ruled Thursday that Pennsylvania must allow the Trump team to watch the counting.

Questions have also been raised over Georgia, where state Republican Party Chairman David Shafer says Republican poll watchers have had trouble being allowed to observe at various polling places, and that Fulton County resumed counting ballots in secret after observers were sent home for the evening; and in Arizona, where a lawsuit claims Maricopa County claims poll workers ruined ballots by having voters fill them out with Sharpies, which cannot be read by voting machines.

The overall presidential race is incredibly close, with preliminary counts giving Biden an edge. In Nevada, RealClearPolitics says Biden has 49.5% of the vote to Trump’s 48.5% with 86% of precincts reporting in, a margin of just 12,042 votes.