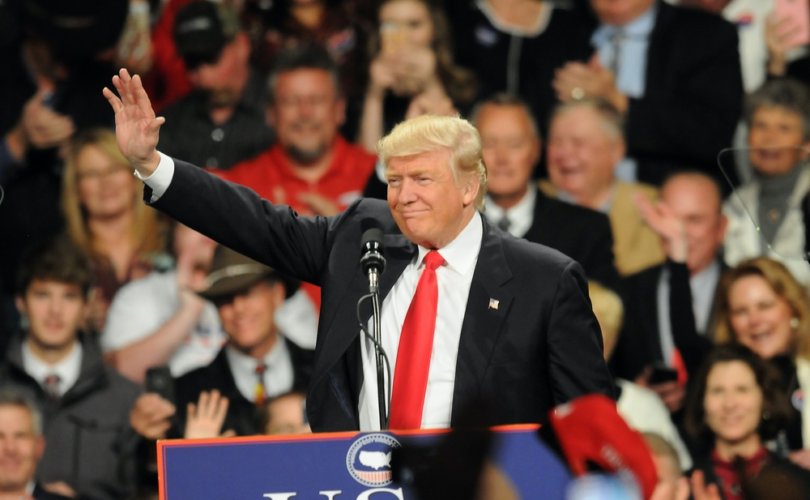 WASHINGTON, D.C., March 11, 2020 (LifeSiteNews) – President Donald Trump has announced the creation of a “Catholics for Trump” coalition, which will officially launch on March 19 at a rally in Milwaukee, Wisconsin.

“The event will bring together Catholics from across the nation who support President Trump’s re-election,” the Trump campaign said in a short statement.

According to a recent poll by EWTN News and RealClear Opinion Research, Catholic support for President Trump depends on the faithful’s fidelity to Church teaching. Catholics who follow Church teaching are more likely to support the president.

“If Donald Trump manages to win a second term in the White House, he will be indebted to the cadre of highly observant Catholics who believe that the man in the Oval Office and his political party align with their own views of faith, culture, and public policy,” RealClear Opinion Research wrote.

However, only 18 percent of Catholics asked indicated that they accept all Church teachings and make an effort to reflect those teachings in their own lives.

“That relatively small group of Catholics often described as devout or active, one fifth of the Catholic population, claims to accept all the teachings of the Church and lives and votes very differently from many of their fellow Americans and even their fellow Catholics,” said EWTN News.

“They are more active in their daily practice of the faith, go to Mass more often, and are guided by Catholic teaching on a more regular basis as they discern how to vote and how to respond to the great social issues and moral crises of our time.”

An earlier poll, commissioned by the same organizations in November 2019, found that with registered Catholic voters, “the president trails Democrats Joe Biden, Bernie Sanders, Elizabeth Warren, and even the lesser-known Pete Buttigieg.”

At this point, only Biden, who is increasing his lead, and Sanders are still competing for the Democratic nomination.

Biden has been trying to court the religious vote. In February, he released a campaign video featuring Pope Francis in which Biden says he goes to Mass and prays the rosary. He also explained that his faith helped him through the most difficult moments in life.

The former vice president under President Barack Obama is known for his support for abortion. At a debate in January, Biden said that Roe v. Wade, which legalized abortion in the United States, needs to be codified into law. That way, women could abort their children even if the Supreme Court overturns the 1973 landmark decision.

Biden has also said he would direct the Justice Department to “do everything in its power” to block pro-life laws in the individual states, including parental notification requirements, ultrasound laws, and waiting periods. He also supports forcing taxpayers to fund abortions.

In 2019, Biden told a PBS interviewer that Pope Francis gives him Communion, after he was denied Communion by a Catholic priest because of his public support for abortion. The Vatican did not comment.

The first “wedding” Biden officiated was between two men.

Donald Trump, who is not a Catholic, is a strong supporter of the pro-life movement.

Trump became the first sitting president to attend the March for Life in Washington, D.C., this January.

“We are here for a very simple reason: to defend the right of every child, born and unborn, to fulfill their God-given potential,” he said in his speech, which was frequently interrupted by applause.

“All of us here understand an eternal truth: Every child is a precious and sacred gift from God. Together, we must protect, cherish, and defend the dignity and the sanctity of every human life,” Trump continued.

“And to all the moms here today, we celebrate you and we declare that mothers are heroes. Your strength, devotion, and drive is what powers our nation. Because of you, our country has been blessed with amazing souls who have changed the course of human history.”

In his speech to hundreds of thousands of pro-lifers, the president pointed out that his administration reinstated and expanded the Mexico City Policy, which prohibits federal funds from going to foreign NGOs supporting abortion.

“We issued a landmark pro-life rule to govern the use of Title X taxpayer funding,” Trump added. “I notified Congress that I would veto any legislation that weakens pro-life policy or that encourages the destruction of human life. At the United Nations, I made clear that global bureaucrats have no business attacking the sovereignty of nations that protect innocent life.”

“And above all, we know that every human soul is divine and every human life, born and unborn, is made in the holy image of Almighty God,” he concluded his speech.