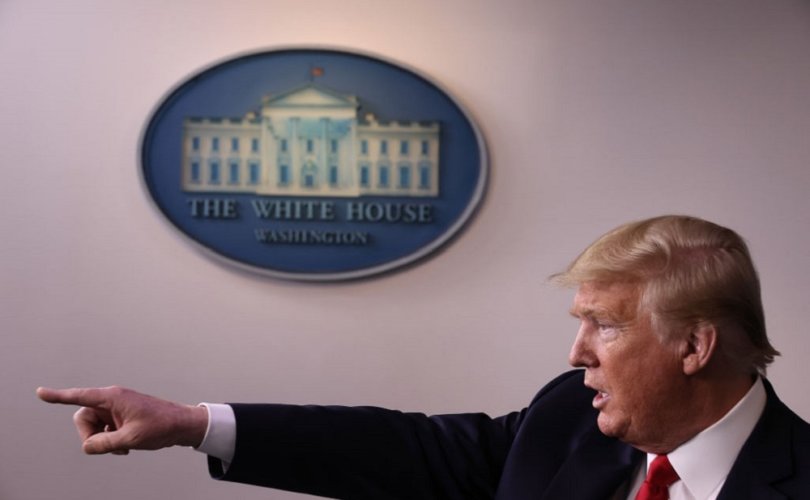 During Monday’s briefing, Trump clashed with a reporter from Phoenix TV, a network with links to the Chinese government.

“Only last week, there were multiple flights coming from China full of medical supplies,” the reporter said. “Companies like Huawei and Alibaba have been donating to the United States, like 1.5 million N95 masks and also a lot of medical gloves, and much more medical supplies.”

“Sounds like a statement more than a question,” Trump responded.

The reporter followed up by asking Trump if he is “cooperating with China” on securing medical supplies.

“Who are you working for, China?” Trump replied.

When questioned by Trump if it was owned by the Chinese state, she replied, “It’s based in Hong Kong” and said the network is a “privately owned company.”

Texas Senator Ted Cruz responded to the exchange on Twitter, saying: “Phoenix TV has been waging information warfare in the US for yrs. They are nominally private but actually state owned. In 2018 I led effort to block them from using cutouts to spread propaganda. MSM should NEVER have given them seat at WH press conference.”

Phoenix TV has been waging information warfare in the US for yrs. They are nominally private but actually state owned. In 2018 I led effort to block them from using cutouts to spread propaganda. MSM should NEVER have given them seat at WH press conference. https://t.co/JswOrAwb8X

Cruz followed up with a series of seven more tweets, which he concluded by saying: “So to recap, the WH Correspondents Assoc gave a seat at the WH press briefing to an employee of the Chinese Communist govt, to ask globally televised Qs to POTUS, at the same time China is waging a propaganda campaign to hide their culpability & coverup of the Wuhan virus?!?”

Yesterday, Trump fielded a question from Ching-Yi Chang, a reporter for the Shanghai Media Group, one of the largest state-owned media groups in China.

”Reporter” Ching-Yi Chang, told @realDonaldTrump he is from Taiwan yesterday in the White House.

He was *born* in Taiwan.

But he *works* for Chinese state owned Shanghai Media Group – a propaganda arm of the Chinese Communist Party.

Ching-Yi, who has also previously worked for Phoenix TV, said he was speaking “on behalf of foreign media group.”

His own Facebook and LinkedIn profiles show that he works for the Shanghai Media Group.

Questioned by Trump where he was from, the reporter responded, “Taiwan.”

The exchange between the two was minimal on this occasion, with Trump giving a brief reply to a question about the French government giving medical aid to Iran, and then an extended response to a mention of Bernie Sanders having suspended his presidential campaign, before moving onto another reporter.

Writing at The National Pulse, British journalist Raheem Kassam says Ching-Yi didn’t want to disclose his employer “because it would reveal that he was yet another CCP propagandist inside the White House Press Briefing Room, and would highlight how Chinese operatives are within feet of the President of the United States.”

Readers can visit LifeSite’s homepage at 5:00 p.m. EST each day for a link to the day’s presidential live-stream. Press conferences are scheduled to begin then, but they often begin later.