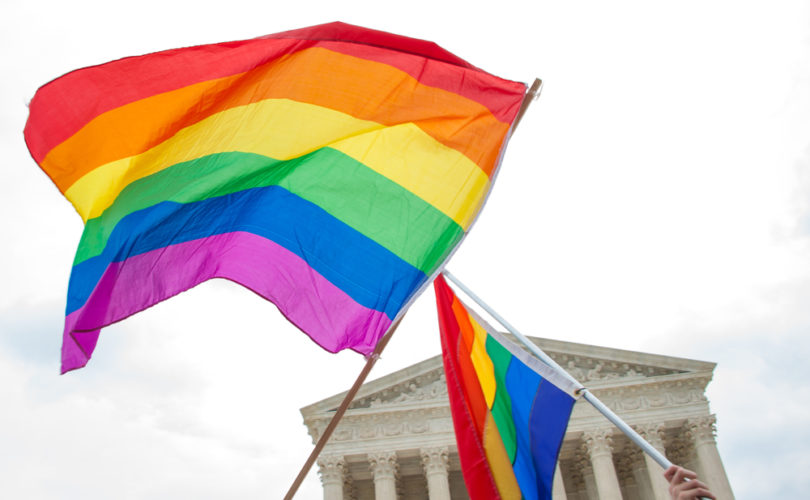 Editor's Note: The following was the later part of another LifeSiteNews report regarding Donald Trump's 60 Minutes comments on the same-sex “marriage” issue. It has been pulled out of that report into this separate, now further extended article. We wish to draw special attention to the historic, unusually harsh dissenting opinions of the four constitutionally conservative justices on the Supreme Court against the Obergefell ruling. Trump's comments appear to have belittled the learned opinions of these justices who are of the type he has promised to appoint to the court. But then again, perhaps he is playing a PR game until he is in power.

TORONTO, November 16, 2016 (LifeSiteNews) — President-elect Trump might want to revisit the sobering words of the late Supreme Court Justice Antonin Scalia on the Obergefell ruling that he now says is “settled.” Trump has often held up Scalia as the model for the type of justice he would like to appoint to the Court.

As LifeSiteNews reported, Scalia described the Obergefell v. Hodges decision as the “furthest imaginable extension of the Supreme Court doing whatever it wants.” He rhetorically asked, “Do you really want your judges to rewrite the Constitution?” The LifeSiteNews report continued:

The Supreme Court judge wrote his own dissent to the Obergefell decision. In what Church Militant calls “his most sharply worded dissent yet,” Scalia called the decision an abuse of the judicial branch, which he said was usurping the authority of the legislative branch, and thus the will of the people.

Scalia's dissent described the Supreme Court's overreach in Obergefell as stepping outside the scope of its authority to dictate radical social policy – which properly is the domain of the democratic process. He wrote that the ruling was a “naked judicial claim to legislative – indeed, super-legislative – power; a claim fundamentally at odds with our system of government.”

All four dissenting judges – Roberts, Scalia, Thomas, and Alito – felt so strongly that each wrote his own dissent. “Today's decree says that my Ruler, and the Ruler of 320 million Americans coast-to-coast, is a majority of the nine lawyers on the Supreme Court,” Scalia wrote. He added that the decision lacks “even a thin veneer of law.”

In prophetic words that have already statistically come true, Scalia concluded that the Obergefell decision will “diminish this Court's reputation for clear thinking and sober analysis.”

The fourth dissenting justice, Samuel Alito, warned,  “All Americans, whatever their thinking on that issue, should worry about what the majority’s claim of power portends.”

Matthew J. Franck, of the Witherspoon Institute, summed up the atrocity, dilemma and future of the Obergefell decision when he wrote in Public Discourse,

But wait. Isn’t the debate over? Isn’t that what a Supreme Court decision on the Constitution means? Well, frankly, no. The movement for rescuing and restoring marriage in our country will not be made to vanish by so transparently political a holding of five justices of the Supreme Court. The movement for defending the sanctity of life in our law, forty-two years after Roe v. Wade, waxes rather than wanes in strength. As the pro-life movement was joined, so the marriage movement will be joined, by defenders of the authentic Constitution so blithely traduced by the Court’s majority.

Franck, like many others astounded at the brazen abuse of legislative powers by the majority five justices, knows this ruling cannot possible stand,

A constitutional ruling so shoddily reasoned, so completely and, one may say, easily dismantled by the four justices who dissent from it, must paper over a cause that cannot ultimately win in an open democratic debate, and that therefore seeks the shelter of powerful friends in the judiciary.

We may take heart, then, from Justice Alito’s observation that “even enthusiastic supporters of same-sex marriage should worry about the scope of the power that today’s majority claims.” Indeed they should, for the debate is not over; it has only entered a new phase. That phase will necessarily include some sober deliberations regarding what can be done about a Supreme Court with (at least) five members who believe that they can rewrite the Constitution at will in order to transform fundamental institutions of our society. For Alito’s very next sentence is, “Today’s decision shows that decades of attempts to restrain this Court’s abuse of authority have failed.” Indeed, they have, and so it is back to the drawing board. When even the chief justice complains of “the majority’s extravagant conception of judicial supremacy,” it is time to do some hard thinking about meaningful institutional reform of the federal judiciary.

The same-sex “marriage” issue is not at all “settled.” In fact, the Obergefell decision is a very good excuse for a President Donald Trump to push for long overdue, “”meaningful institutional reform of the federal judiciary”, no matter what Trump's views may be on homosexuality. Without substantial reform imposed on the court there is no doubt that President Trump will be confronted with more abuses of judicial power by Supreme Court justices on other issues that are high priorities on his “Washington outsider” agenda to fix a broken nation.

An unreformed and non-restrained court will certainly attempt to block a good number of President Donald Trump's reform intentions.

Planned inhumanities: From Roe to Obergefell

Obergefell and the New Homophiles

So now is it ‘hate speech’ to deplore the Obergefell decision?