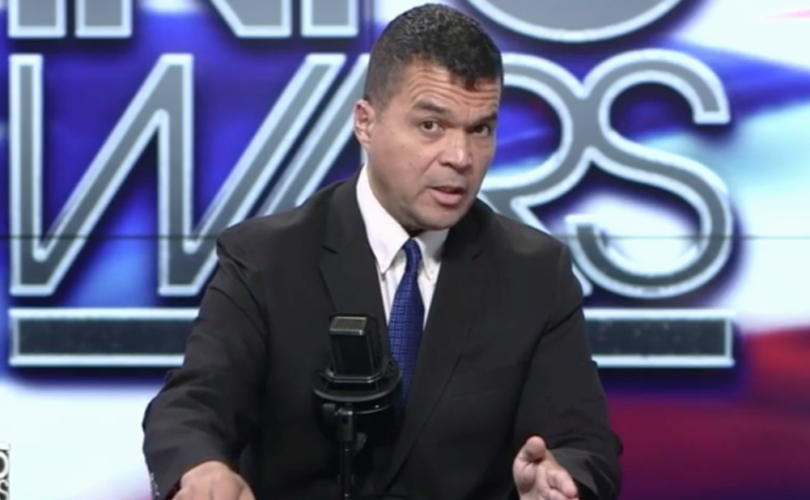 (LifeSiteNews) – Former Trump administration HHS adviser Dr. Paul Alexander told Alex Jones on Infowars that the mRNA COVID jabs were like a “biological weapon … that has been released.”

In the lengthy interview, Alexander also criticized Dr. Anthony Fauci and the response of the U.S. generally to the declared COVID-19 pandemic. The two discussed a range of issues, including former President Donald Trump, the potentially never-ending boosters, and the harm of lockdowns to children.

Dr. Alexander told Jones that the push to continually jab people, even with serious immune-system complications that he said have presented themselves as a result, has led him to believe that the vaccine has been weaponized.

“I have biological terrorism, bioterrorism in my background,” he said.

Alexander blasted the FDA approving a “new shot based on the Wuhan strain” considering the approval was based on research conducted on “eight mice, a rodent study.”

“Eight mice have now decided the fate of the United States … they want to vaccinate 200 million Americans based on data from eight mice.”

Alexander criticized the push to vaccinate our way out of the declared pandemic, stating, “The public needs to understand that [the vaccine] failed on Delta. It failed completely on Omicron with waning efficacy, near immediate negative efficacy and it is very harmful.”

He listed the litany of adverse events that have been recorded, many of them affecting children “who have zero risk” of dying after a COVID diagnosis.

“We know of the pericarditis, myocarditis, blood clotting … etc.”

Jones added that countries such as Denmark have stopped the booster push of people under 50 years of age as more data has been released about the risk-reward analysis of the jabs. In addition, Danish health authorities stated earlier in the summer that those under 18 should not get vaccinated against COVID in general unless told otherwise for a specific health reason.

Alexander explained that any potential dangers associated with being diagnosed with COVID are based on a “risk stratification,” with only those who are seriously ill or weak to begin with being susceptible to an above-average threat of viral harm.

Dr. Alexander said that this was known since “February, March and April” and that health officials should have worked to “properly protect the vulnerable in society” by using “early treatments as needed” while leaving “the rest of society, 99.9%, alone.”

If politicians would have “let them live a normal life,” he said, “and deal with their normal lives, deal with the pathogen, they would have developed natural immunity and we’d have gotten to herd immunity very early on.”

While discussing the topic of natural immunity, Alexander said that children are born with an innate immunity due to the antibodies they receive from their mother as infants, but that it is necessary for them to interact with other kids in order to build their immune systems as they grow. He believes that the harms done to children were largely due to what he considers to be lie “duplicitous” remarks from Fauci on natural immunity and vaccination.

“He knew that children are very, very important players in the immunological landscape, and that if you vaccinate children with these vaccines, we run the risk of subverting the innate response that could devastate the response,” Alexander said.

Alexander also stated that he believed the mass vaccination of kids with the experimental jab has led to a resurgence in hepatitis and polio. These are “diseases and illnesses they did not have before,” he said.

Trump was great but had a blind spot

Dr. Alexander told Jones that he believed that Trump will “go down as probably one of the greatest presidents the United States has ever had,” but that he was “badly misled by Fauci, Birx, that whole cabal.”

“They devastated his presidency,” he added. “I don’t fault President Trump, I think he’s the best thing on deck today. He must stand up, though.”

“He has to stand up today and state clearly that those lockdowns were the wrong move. He took bad guidance from folks … he must stand up against these COVID gene injections … we need his voice, particularly to protect the children.”

Alexander ended the interview by stating that Pfizer had acted in a “fraudulent” manner by “claiming 95% relative risk reduction” reported from the clinical trials for the big-pharma company’s mRNA jab.

“When Pfizer submitted the data to the FDA for approval, they actually had data that they omitted 3,000 subjects … When we ran the numbers, that 95% risk reduction dropped to under 20%. In other words, it was not meeting the 50% threshold that was set.”

His statements echo what the Canadian COVID Care Alliance stated in their own research on the Pfizer COVID jabs where they also called into question the notion that the jab offered a 95 percent risk reduction.