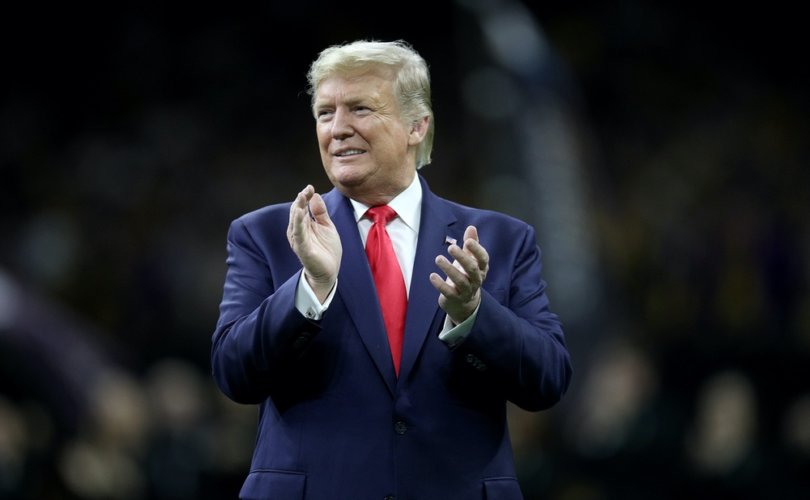 As he spoke, the president was surrounded by religious leaders who had joined him in the Oval Office on National Religious Freedom Day.

“The government must never stand between the people and God.” — President @realDonaldTrump pic.twitter.com/PqcJLItiVJ

It is a “sacred principle in our republic that government must never stand between the people and God,” said President Trump. “Yet in public schools around the country authorities are stopping students and teachers from praying, sharing their faith, or following their religious beliefs.”

“It is totally unacceptable. You see it on the football field. You see it so many times where they’re stopped from praying,” observed the president, declaring, “We are doing something to stop that.”

With Trump at the White House was Joe Kennedy, a high school football coach who was fired for silently praying on the field, according to Politico.

“Tragically, there is a growing totalitarian impulse on the far left that seeks to punish, restrict, and even prohibit religious expression,” Trump continued, noting that not that many years ago, it would have been unthinkable that something like that could happen. He called the “right to pray” a “very important and powerful right.”

There has not been a federal guidance regarding protected prayer and religious expression in public schools since 2003, according to the White House, and “the update will help safeguard students’ rights by giving education providers and students the most current information concerning prayer in public schools.”

The new guidance means that states “will be required to report instances in which the right to pray has been denied in public schools,” Politico reported.

“The proposed rules would eliminate burdensome Obama-era requirements that unfairly imposed unique regulatory burdens only on religious organizations,” the White House continued. The Office of Management and Budget will release a memo requiring federal agencies “to ensure that the grant-making practices of state recipients of Federal funding comply with the First Amendment.”

“From its opening pages, the story of America has been rooted in the truth that all men and women are endowed with the right to follow their conscience, worship freely, and live in accordance with their convictions,” he said. “On Religious Freedom Day, we honor the foundational link between freedom and faith in our country and reaffirm our commitment to safeguarding the religious liberty of all Americans.”

“Throughout his presidency, Donald Trump has been a consistent champion of religious liberty,” said Schilling. “Today’s actions by his administration further solidify this, offering important protections to faith-based groups who faced unfair discrimination under the previous president and ensuring that the First Amendment rights of students are fully respected.”

Tony Perkins, president of the Family Research Council, said Trump’s actions yesterday will address something that is a problem in many parts of the country.

“In a lot of districts, school officials are either ignorant about student speech or outright hostile to prayer, but in too many instances, kids have been taught that expressions of faith aren’t welcome,” he said.

“Believe it or not, this kind of federal guidance is supposed to be updated every couple of years — and yet, almost two decades have gone by, and no president has,” Perkins explained. “So, this morning, for the first time since 2003, districts across America are about to get a lesson in students’ rights. And to ensure that schools are listening, local agencies will have to promise to abide by the law before they get a cent of federal funds.”

The president also put forth a “Proclamation on Religious Freedom Day, 2020,” in which he briefly recounted the significance of religious liberty in America’s history and his administration’s efforts to more firmly secure religious freedom in the United States and around the world.

“On this Religious Freedom Day, we reaffirm our commitment to protecting the precious and fundamental right of religious freedom, both at home and abroad,” states the proclamation, in part. “Our Founders entrusted the American people with a responsibility to protect religious liberty so that our Nation may stand as a bright beacon for the rest of the world.”

Full text of the proclamation:

From its opening pages, the story of America has been rooted in the truth that all men and women are endowed with the right to follow their conscience, worship freely, and live in accordance with their convictions. On Religious Freedom Day, we honor the foundational link between freedom and faith in our country and reaffirm our commitment to safeguarding the religious liberty of all Americans.

Religious freedom in America, often referred to as our “first freedom,” was a driving force behind some of the earliest defining moments of our American identity. The desire for religious freedom impelled the Pilgrims to leave their homes in Europe and journey to a distant land, and it is the reason so many others seeking to live out their faith or change their faith have made America their home.

More than 230 years ago, the Virginia General Assembly passed the Virginia Statute for Religious Freedom, which was authored and championed by Thomas Jefferson. Jefferson famously expounded that “all men shall be free to profess, and by argument to maintain, their opinions in matters of Religion, and that the same shall in no wise diminish, enlarge or affect their civil capacities.” This statute served as the catalyst for the First Amendment, which enshrined in law our conviction to prevent government interference in religion. More than 200 years later, thanks to the power of that Amendment, America is one of the most religiously diverse nations in the world.

Since I took office, my Administration has been committed to protecting religious liberty. In May 2017, I signed an Executive Order to advance religious freedom for individuals and institutions, and I stopped the Johnson Amendment from interfering with pastors’ right to speak their minds. Over the last 3 years, the Department of Justice has obtained 14 convictions in cases involving attacks or threats against places of worship. To fight the rise of anti-Semitism in our country, I signed an Executive Order last month to ensure that Federal agencies are using nondiscrimination authorities to combat this venomous bigotry. I have also made clear that my Administration will not tolerate the violation of any American’s ability to worship freely and openly and to live as his or her faith commands.

My Administration also remains cognizant of the stark realities for people seeking religious liberty abroad and has made protecting religious minorities a core pillar of my Administration’s foreign policy. Repressive governments persecute religious worshipers using high-tech surveillance, mass detention, and torture, while terrorist organizations carry out barbaric violence against innocent victims on account of their religion.

To cast a light on these abuses, in July 2019, I welcomed survivors of religious persecution from 16 countries into the Oval Office. These survivors included Christians, Jews, and Muslims, who all shared similar stories of persecution. At the United Nations in September, I called on global leaders to take concrete steps to prevent state and non‑state actors from attacking citizens for their beliefs and to help ensure the sanctity and safety of places of worship. And, last summer, the State Department convened its second Ministerial to Advance Religious Freedom, where our diplomats engaged a broad range of stakeholders in government and civil society, both religious and secular, to identify concrete ways to combat religious persecution and discrimination around the world and ensure greater respect for freedom of religion and belief.

On this Religious Freedom Day, we reaffirm our commitment to protecting the precious and fundamental right of religious freedom, both at home and abroad. Our Founders entrusted the American people with a responsibility to protect religious liberty so that our Nation may stand as a bright beacon for the rest of the world. Today, we remain committed to that sacred endeavor and strive to support those around the world who still struggle under oppressive regimes that impose restrictions on freedom of religion.

NOW, THEREFORE, I, DONALD J. TRUMP, President of the United States of America, by virtue of the authority vested in me by the Constitution and the laws of the United States, do hereby proclaim January 16, 2020, as Religious Freedom Day. I call on all Americans to commemorate this day with events and activities that remind us of our shared heritage of religious liberty and that teach us how to secure this blessing both at home and around the world.

IN WITNESS WHEREOF, I have hereunto set my hand this fifteenth day of January, in the year of our Lord two thousand twenty, and of the Independence of the United States of America the two hundred and forty-fourth.