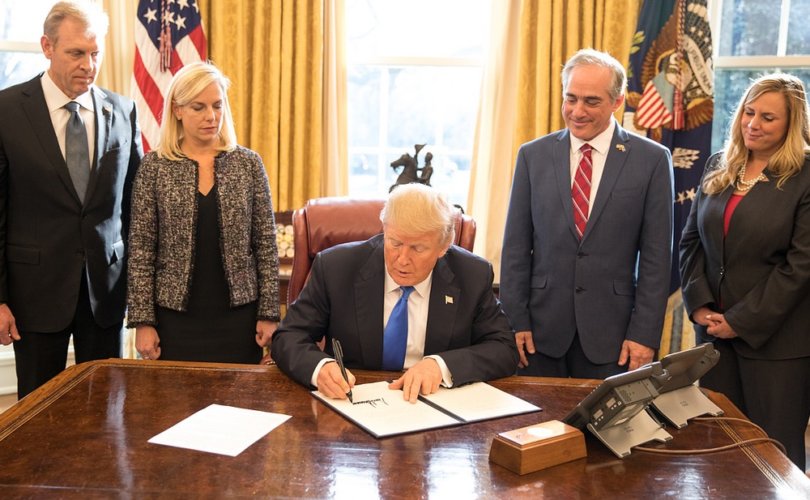 Trump made the proclamation on Friday, as hundreds of thousands of pro-life pilgrims converged upon Washington D.C. for the annual March for Life.

“Today, we focus our attention on the love and protection each person, born and unborn, deserves regardless of disability, gender, appearance, or ethnicity,” begins Trump’s proclamation.

“Reverence for every human life, one of the values for which our Founding Fathers fought, defines the character of our Nation,” Trump continued in the proclamation. “Today, it moves us to promote the health of pregnant mothers and their unborn children.”

The president remarked how holding human life as sacred involves standing up for the “the weak and the powerless,” and “dispels the notion that our worth depends on the extent to which we are planned for or wanted.”

Trump emphasized that science is on the side of life in the proclamation, mentioning it twice.

“Science continues to support and build the case for life,” he states. “Medical technologies allow us to see images of the unborn children moving their newly formed fingers and toes, yawning, and even smiling.”

“Those images present us with irrefutable evidence that babies are growing within their mothers’ wombs — precious, unique lives, each deserving a future filled with promise and hope,” Trump continued. “We can also now operate on babies in utero to stave off life-threatening diseases. These important medical advances give us an even greater appreciation for the humanity of the unborn.”

The president then added: “Today, citizens throughout our great country are working for the cause of life and fighting for the unborn, driven by love and supported by both science and philosophy.”

Trump praised the pro-life movement in his proclamation for its commitment not only to unborn children, but to mothers of unborn children. He praised healthcare workers who uphold life in their work. He praised legislators who work to create protections on behalf of life.  And he praised those who took part in the March for Life to witness to life.

“These compassionate Americans are volunteers who assist women through difficult pregnancies, facilitate adoptions, and offer hope to those considering or recovering from abortions,” he stated. “They are medical providers who, often at the risk of their livelihood, conscientiously refuse to participate in abortions.”

“And they are legislators who support health and safety standards, informed consent, parental notification, and bans on late-term abortions, when babies can feel pain,” Trump then added. “These undeterred warriors, many of whom travel to Washington, D.C., every year for the March for Life, are changing hearts and saving lives through their passionate defense of and loving care for all human lives.”

Trump’s proclamation also stated that reverence for human life “animates our concern for single moms; the elderly, the infirm, and the disabled; and orphan and foster children,” and “compels us to address” the opioid epidemic and mental health issues.

The reason for National Sanctity of Human Life Day, stated Trump, is “to affirm the truth that all life is sacred, that every person has inherent dignity and worth, and that no class of people should ever be discarded as 'non-human.'”

President Ronald Reagan proclaimed the first National Sanctity of Human Life Day in 1984, making note that millions of U.S. lives lost to abortion in the 11 years since Roe v. Wade — already by then “over tenfold the number of Americans lost in all our Nation’s wars” — was “a tragedy of stunning dimensions that stands in sad contrast to our belief that each life is sacred.”

Reagan called upon Americans to gather in their homes and places of worship on Sunday, January 22, 1984, “to give thanks for the gift of life, and to reaffirm our commitment to the dignity of every human being and the sanctity of each human life.”

Reagan issued the proclamation each year during his eight-year presidency on the Sunday closest to the Roe v. Wade anniversary.

This practice of declaring Sanctity of Human Life Day in conjunction with the annual commemoration of Roe v. Wade has been either continued – or not – every year since Reagan’s 1984 declaration depending on who’s been in the White House.

It was continued every year throughout the administration of Reagan’s successor, George H.W. Bush. Bill Clinton then dropped it during his eight years as president, and George W. Bush then resumed it again for his eight years in office.

Barack Obama did not declare National Sanctity of Human Life Day during the eight years of his administration.