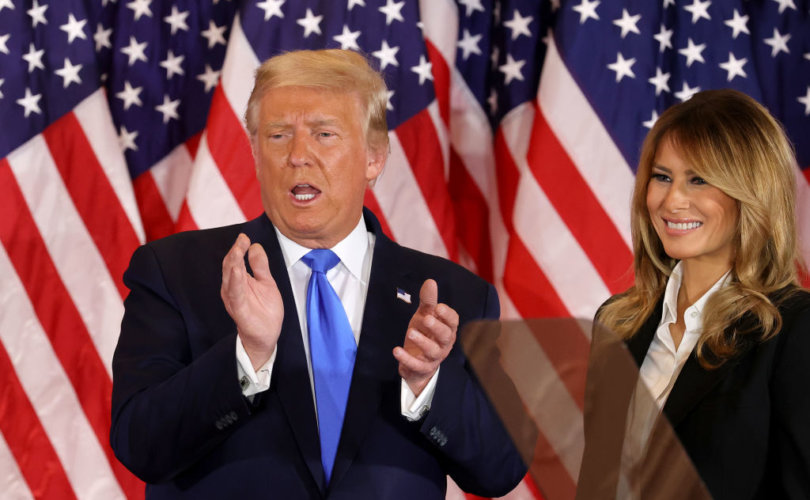 November 4, 2020 (LifeSiteNews) – President Donald Trump has declared victory in Pennsylvania, Georgia, North Carolina, and Michigan, in an aggressive move to frame the narrative going into what promises to be a heated battle of lawsuits and recounts to decide the 2020 presidential election.

“We have claimed, for Electoral Vote purposes, the Commonwealth of Pennsylvania (which won’t allow legal observers) the State of Georgia, and the State of North Carolina, each one of which has a BIG Trump lead,” Trump tweeted Wednesday afternoon. “Additionally, we hereby claim the State of Michigan if, in fact, there was a large number of secretly dumped ballots as has been widely reported!”

We have claimed, for Electoral Vote purposes, the Commonwealth of Pennsylvania (which won’t allow legal observers) the State of Georgia, and the State of North Carolina, each one of which has a BIG Trump lead. Additionally, we hereby claim the State of Michigan if, in fact,…..

…..there was a large number of secretly dumped ballots as has been widely reported!

Twitter quickly attached to both tweets disclaimers that vote-counting was not yet complete in those races and that Trump’s statements were “disputed” (as is virtually every political claim made on social media, most of which the platform does not qualify).

The announcement follows the president declaring victory early Wednesday morning, accusing Democrats of perpetrating a “fraud on the American people” and vowing to go to the US Supreme Court if necessary to stop a potential effort to steal the election.

The Trump campaign has already requested a recount in Wisconsin while directing his legal team to intervene in Michigan, where the campaign says it was denied “meaningful access to numerous counting locations to observe the opening of ballots and the counting process” and is suing to “review those ballots which were opened and counted while we did not have meaningful access”; and in Pennsylvania, where cases have been reported of voters apparently registered to vote using the addresses of vacant lots rather than valid residences.

Questions have also been raised over Georgia, where state Republican Party Chairman David Shafer says Republican poll watchers have had trouble being allowed to observe at various polling places, and that Fulton County resumed counting ballots in secret after observers were sent home for the evening.

While the presidential race remains incredibly close and will likely not be resolved without a drawn-out legal battle, conservatives have already taken solace in the fact that Republicans will likely retain control of the Senate, thereby blocking at least some of the designs of a potential Biden administration.