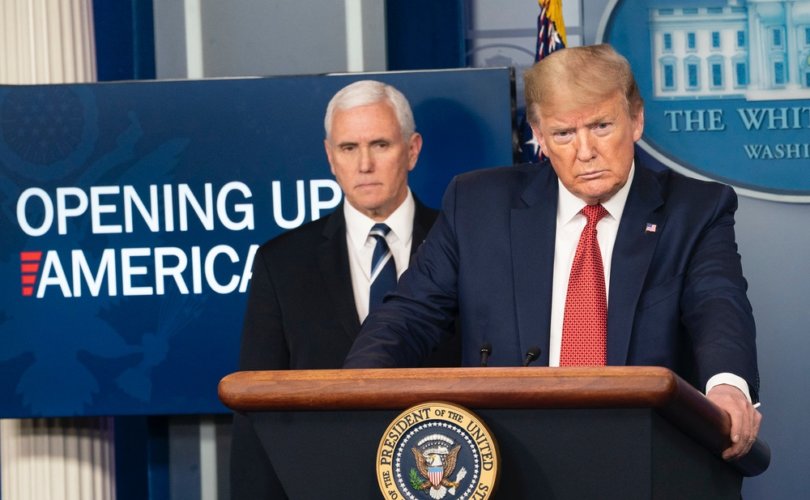 WASHINGTON, D.C., May 22, 2020 (LifeSiteNews) – President Donald Trump today declared houses of worship “essential places that provide essential services,” saying they should be opened up right away and governors who get in the way will have to answer to him.

“Some governors have deemed liquor stores and abortion clinics as essential but have left out churches and other houses of worship. It’s not right,” said Trump. “So I’m correcting this injustice and calling houses of worship essential. The people are demanding to go to church and synagogue, go to their mosque – many millions of Americans embrace worship as an essential part of life.”

Many people of faith have complained that draconian coronavirus lockdowns unfairly targeted churches. Pastors who have held “parking lot” services during which parishioners stayed in their cars have been fined. One California county banned singing during live-streamed church services. When the Knoxville, Tennessee government began to allow people to go to church again, it told churches, “[t]he physical taking of communion/sacrament should not be performed due to the serial breaking of physical distancing across a congregation.” Maryland Gov. Larry Hogan banned Catholic priests from going within six feet of their parishioners.

In Virginia, Lighthouse Fellowship conducted a worship service with a congregation of 16 people practicing so-called social distancing in a facility that seats more than 200. The pastor faces a year in jail and/or a $2,500 fine. The Trump administration Department of Justice issued a Statement of Interest siding with the church, writing, “there is no pandemic exception to the Constitution and its Bill of Rights.”

New Jersey Gov. Phil Murphy even told Tucker Carlson that he “wasn’t thinking of the Bill of Rights” when he banned religious gatherings. “That’s above my paygrade,” he said.

A rabbi and a Catholic priest are suing Murphy over his order. A number of lawsuits in other states have been filed as well.

Trump emphasized, “I call upon governors to allow our churches and places of worship to open right now. If there’s any question, they’re gonna have to call me, but they’re not gonna be successful in that call. These are places that hold our society together and keep our people united.”

Trump began his press conference by thanking the Centers for Disease Control (CDC) and saying the CDC would be releasing guidelines for religious gatherings soon. He said he trusts faith leaders to take proper steps to protect the health of their congregations.

He concluded, “The governors need to do the right thing and allow these very important essential places of faith to open right now, for this weekend. If they don’t do it, I will override the governors. In America, we need more prayer, not less.”

While many Protestant churches have responded to the coronavirus panic and subsequent shutdowns with “parking lot” services, every single Catholic diocese in the U.S. cancelled public Masses and some even banned the Last Rites. Dioceses around the country are slowly beginning to open their churches back up, although Holy Communion and other sacraments remain inaccessible to millions of American Catholics. The Catholic bishops of Minnesota along with Lutheran leaders announced this week that they will resume worship services on May 26 despite Governor Walz’s current COVID-19 executive order which allows retailers to operate at 50 percent capacity but caps church worship services at 10 people. They are backed by the lawyers at the Becket Fund for Religious Liberty.

In California, hundreds of pastors plan to defy Gov. Gavin Newsom’s ban on religious gatherings on May 31.