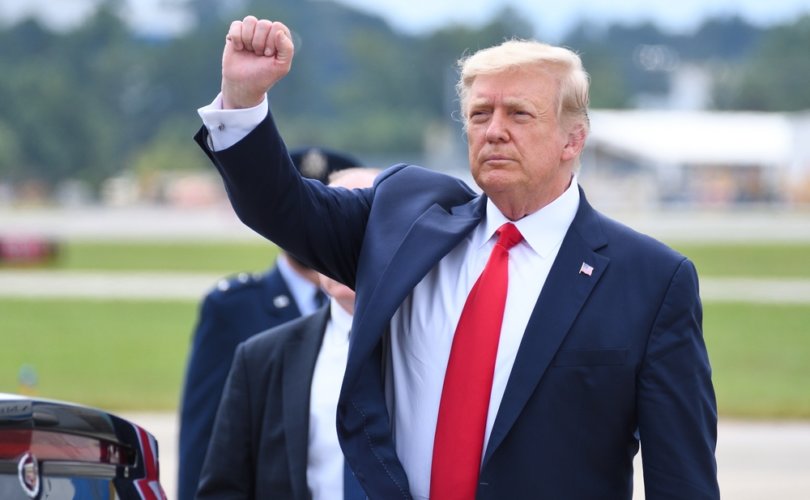 (LifeSiteNews) – Former President Donald Trump struck a defiant tone this week on the latest round of Democrat congressional hearings into the January 6, 2021 riot at the U.S. Capitol, declaring that the pro-Trump rally preceding it “represented the greatest movement in the history of our Country to Make America Great Again.”

“The Unselect Committee didn’t spend one minute studying the reason that people went to Washington, D.C., in massive numbers, far greater than the Fake News Media is willing to report, or that the Unselects are willing to even mention,” Trump said via his own social network, Truth Social, “because January 6th was not simply a protest, it represented the greatest movement in the history of our Country to Make America Great Again. It was about an Election that was Rigged and Stolen, and a Country that was about to go to HELL..& look at our Country now!”

On January 6, 2021, protesters broke into the U.S. Capitol building after former President Donald Trump’s “March to Save America” rally, which was meant to encourage Republican lawmakers to delay the certification of electoral votes from a handful of states over concerns about vote fraud in the 2020 presidential election.

Viral videos showed people engaging in physical altercations with police, pushing against security barricades, breaking through windows, trespassing in congressional offices, and climbing on walls, causing the vote certification to be suspended and lawmakers to be evacuated from the chambers. Other videos, however, showed that many were let into the Capitol by police and simply walked the halls after the initial breach. Several people died, but the only victim of direct, intentional violence was a Trump supporter named Ashlii Babbitt.

Trump’s political opponents blamed him for “inciting” the riot, leading to an unsuccessful impeachment attempt. Yet despite the FBI failing to find evidence that the violence was planned or organized, more than a dozen Democrat committee investigations into the event have continued ever since, with hundreds of people arrested and many conservatives expressing concerns about their treatment and disproportionate, selective punishment.

On Thursday, the Select Committee to Investigate the January 6 Attack on the United States Capitol began a new round of televised hearings, purporting to offer “previously unseen material documenting January 6th, receive witness testimony, and provide the American people an initial summary of its findings” about the riot and the Trump campaign’s preceding unsuccessful efforts to contest the outcome of the 2020 election.

Critics of the hearings frame them as political theater, meant to divert attention from Democrats’ handling of pressing issues and sully their political enemies with the actions of the rioters, who represented a minuscule percentage of rallygoers. In fact, the violence started with individuals who either left Trump’s speech early or skipped it entirely, and who, rather than feeling “incited” by Trump, found the president’s remarks passive and impotent, according to texts.

As another sign of the project’s partisan motives, critics also point to House Speaker Nancy Pelosi’s blocking of Republican appointees to the committee who could have balanced its perspective by introducing evidence, calling witnesses, and pursuing lines of questioning at odds with Democrats’ preferred narratives.

“The Unselect Committee of political Thugs, essentially the same group who brought you the now fully debunked and discredited RUSSIA, RUSSIA, RUSSIA HOAX (and many others!), refused to study and report on the massive amount of irrefutable evidence, much of it recently produced, that shows the 2020 Presidential Election was Rigged and Stolen,” Trump said in another Truth Social post. “They want NOTHING to do with that topic because they cannot win on the facts. CANCEL & DENY, call it “THE BIG LIE,” is all they can do. Corrupt Politicians!

“The Unselect Committee has now learned that I, as President, suggested & offered up to 20,000 National Guard, or troops, be deployed in D.C. because it was felt that the crowd was going to be very large,” the president claimed in a third. “Crazy Nancy Pelosi turned down the offer, she didn’t like the way it looked. Likewise, the Mayor of D.C. Had they taken up the offer,  there would have been no January 6th. The Unselects have ruled Pelosi “off limits, no questions.” The hearing is another political HOAX to counter Inflation etc.”

Trump and his supporters have repeatedly cited that suggestion in defense of the president’s handling of the situation. Kash Patel, former Chief of Staff to Acting Defense Secretary Christopher Miller in the Trump administration, has suggested there was “not enough information sharing happening,” and that local officials rejected the offer “for political reasons, I believe.” Trump’s foes claim the offer was not an “official” request.

Regardless, the hearings have so far produced at least one notable revelation.

Robert Engel, the head of Trump’s security detail, reportedly testified that the president had wanted to accompany marchers to the Capitol himself, further undermining the notion that Trump intended or expected the environment to become physically dangerous.