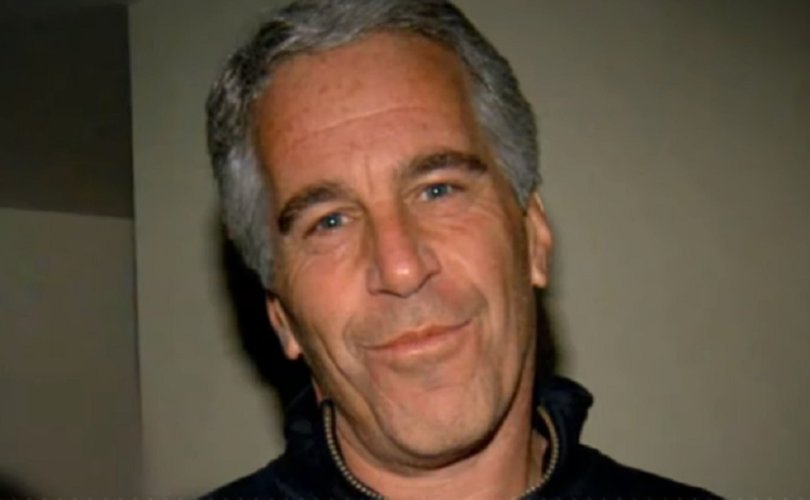 August 13, 2019 (LifeSiteNews) – President Donald Trump is under fire for retweeting a conservative comedian’s video speculating that ex-Democrat power couple Bill and Hillary Clinton are responsible for the death of billionaire and accused sex trafficker Jeffrey Epstein.

Epstein was found dead from apparent suicide in his cell at New York’s Metropolitan Correctional Center (MCC) last weekend, less than three weeks after a failed suicide attempt. He was being held on charges of trafficking underaged girls to be raped by himself and wealthy associates.

The case has been a source of intense curiosity for months, due to the mysteries surrounding Epstein’s private Caribbean retreat, dubbed “Pedophile Island” by locals, as well as to the botched past prosecution and lax punishment for his previous crimes.

After Epstein’s death, Trump retweeted a video from conservative pundit and comedian Terrence Williams speculating that his suicide was actually a murder staged by the former president and failed presidential candidate.

Died of SUICIDE on 24/7 SUICIDE WATCH ? Yeah right! How does that happen#JefferyEpstein had information on Bill Clinton & now he’s dead

I see #TrumpBodyCount trending but we know who did this!

“He had information on the Clintons, and the man ended up dead,” Williams says in the video. “I don’t wanna know if Bill Clinton eats boogers. Don’t tell me nothin’, I don’t wanna end up dead.”

The conspiracy theory stems from the fact that Bill Clinton flew on Epstein’s private plane on dozens of occasions, and that the billionaire had visited the Clinton White House several times, as well as a long-simmering conspiracy theory about the 1993 suicide of White House counsel Vince Foster. (Trump also flew with Epstein in 1997 but later banned him from his Mar-a-Lago club for assaulting an underage girl.)

Democrat presidential contenders and anti-Trump media outlets condemned Trump as “reckless,” “bizarre,” and “sowing national chaos” for sharing the video. “The retweet was from somebody that is a very respected conservative pundit so I think that was fine,” Trump responded Tuesday. “I want a full investigation.”

While speculation is running rampant, prominent conservatives such as author Ann Coulter (one of Trump’s earliest backers and a longtime Clinton critic) have dismissed the notion that the Clintons could have engineered a fake suicide of a high-profile prisoner. Further, Epstein’s death hasn’t ended the investigation; the FBI executed a raid on Epstein’s private island two days after he killed himself.

You forgot the Masons and Bilderbergs.  The Royal family can't even stop Fleet Street from mocking them on a daily basis, and the Clintons couldn't beat Trump with the entire media's help. https://t.co/EUsttOmuQO

If you believe the Clintons crafted a genius plan to murder Epstein you’re going to have to explain why Hillary wasn’t even able to find Wisconsin on a map.

That said, more mainstream questions are also swirling over the management of the facility holding Epstein, particularly why he was taken off suicide watch and why the officers on duty neglected their regular checks of his cell. U.S. Attorney General William Barr has pledged that the Justice Department will investigate the “serious irregularities” apparent at MCC and continue the investigation into Epstein’s crimes.

“Let me assure you this case will continue on against anyone who was complicit with Epstein,” Barr declared. “Any co-conspirators should not rest easy. The victims deserve justice, and they will get it.”