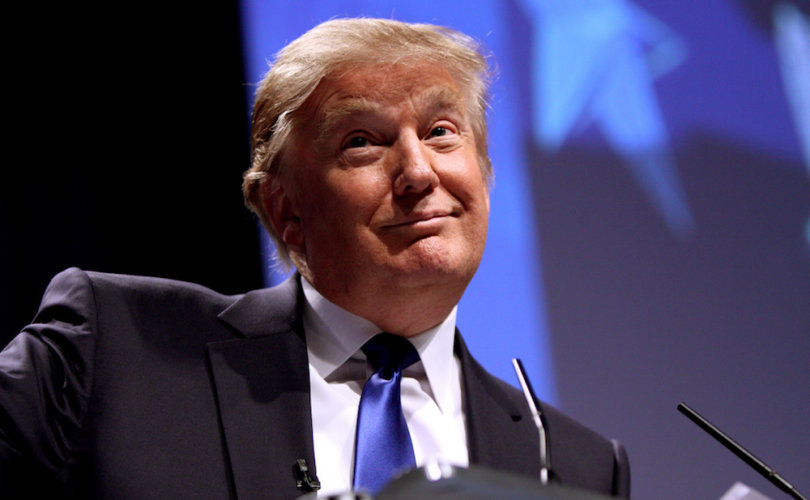 WASHINGTON, D.C., January 25, 2017 (LifeSiteNews) – President Trump’s newly reinstated ban on funding to foreign pro-abortion groups is not just a repeat of old Republican policy it turns out. In fact, it is vastly stronger.

The “Mexico City Policy” has been enacted by Republican presidents since Reagan, and subsequently overturned by Democratic presidents. It bars U.S. taxpayer funding to organizations abroad that perform or promote abortions.

But Trump’s version of the executive order goes even further. Not only does it ban funding to notorious abortion providers such as the International Planned Parenthood Federation and Marie Stopes International, but it could even be used to cut off the United Nations Population Fund (UNFPA).

Steve Mosher, president of the Population Research Institute and one of the world’s leading opponents of population control, said it is “absolutely” more comprehensive than its predecessors, for two main reasons:

“It’s a wonderful policy,” Mosher said. “Trump is not just reverting to the policy of previous Republican administrations, but is actually going well beyond it.”

He said if properly implemented, the Trump policy will save more lives than past Mexico City Policies.

Mosher, more than any scholar in the West, has exposed the ravages of China’s forced “one-child” policy and the Communist regime’s forced sterilization of women. Both have been funded through international “family planning” agencies like the UNFPA (United Nations Population Fund), which in turn are funded in part by U.S. taxpayer dollars, especially during Democratic administrations.

Many lives at stake

For its part, IPPF said yesterday that it “will lose $100 million USD” under the Trump policy, which it denigrates as a “Global Gag Rule.”

“Over the years USAID has been a huge supporter of family planning – with a budget of over $600 million per year. Reinstatement [of the Mexico City Policy] will mean that years of progress to increase access to essential services globally, will be lost,” said the IPPF statement.

Mosher told LifeSiteNews that by expanding the Mexico City Policy to include all international “health assistance” programs, it becomes easier to stop funding of international groups pushing abortion and sterilization.

“So many health programs are compromised by ‘family planning,’” he said. He cited the theoretical example of an aid organization that offers to provide mosquito netting to a foreign country on the condition that its people take part in programs that incentivize sterilization or promote abortion as part of “family planning.” “Now we get the blanket prohibition on any program that promotes involuntary sterilization.”

PRI’s Abbamonte expanded on the significance of the more comprehensive Trump policy:

This means that the new [Mexico City Policy] not only applies to funding through USAID and the Department of State as it did under the Bush Administration but will now also include global health funding coming from other sources like PEPFAR (the U.S. President’s Emergency Plan for AIDS Relief)—which President Bush had exempted from the [Mexico City Policy]—and various government departments like the Department of Health and Human Services.”

Mosher is bullish about Trump’s “very strong” Mexico City Policy defunding UNFPA, which he says has clearly promoted abortion and “involuntary sterilization” overseas, in places such as China and El Salvador. The UN agency, formed in the 1960s, has evolved into the world’s leading organization promoting liberal population control policies, including abortion and coercive sterilization.

“The UNFPA is telling El Salvador that they need to legalize abortion,” Mosher said, noting that this will disqualify it from receiving U.S. funds under the new Trump executive order.

Mosher said the new policy will also help stop abortion in situations where an international organization claims it does not promote abortion as family planning–so it can receive U.S. funds–when it actually does, which happened in the past with International Planned Parenthood’s Western Hemisphere Region (IPPF/WHR).

“They would not get away with it now,” he predicted.

Mosher explained how the comprehensive Trump Mexico City executive order essentially incorporates all the efforts by Republicans over the last 35 years to stop American funding of anti-life policies overseas. One of those reforms is the Kemp-Kasten Amendment, authored in 1985 by pro-life conservative icon Rep. Jack Kemp, R-NY, and Sen. Bob Kasten, R-WI.

Kemp-Kasten was a pro-life reform that banned U.S. foreign aid to any organization operating abroad found to be involved in coercive abortion or involuntary sterilization. The amendment essentially sought to correct loopholes through which coercive abortion and sterilization were funded through U.S. taxpayer funds.

From 1973 on, the United States Agency for International Development (USAID) has followed the Helms Amendment named after the late conservative stalwart Sen. Jesse Helms (R-NC). It bans U.S. government funds for the use of providing abortions as a method of family planning worldwide.

Following the Clinton years, the George H.W. Bush administration determined that the UNFPA's involvement with China’s abortion and sterilization practices under the Communist dictatorship's “One Child” policy violated Kemp-Kasten, so Bush barred U.S. funding for UNFPA in 2002.

The renewed ban stood until Obama became president in 2009 and overturned the Bush policy, directing Congress to restore U.S. funding to the UNFPA.

But Trump's beefed-up Mexico City Policy could end that funding, for at least four to eight more years.

“Kemp-Kasten [the 1985 pro-life appropriations amendment] is written into the [Trump] Mexico City policy,” Mosher said. “Now we have both in the same memorandum. I think this can be used to cut off [U.S.] funding  to the UN Population Fund.”

He added, “The UN is involved in [involuntary] sterilization policies everywhere,” citing China, Vietnam and North Korea as examples.

IPPF/WHR joined a pro-abortion coalition of nearly 140 groups in protesting the Trump Mexico City Policy and essentially swearing off U.S. funds due to the new restrictions.

IPPF/WHC complained that the new Trump policy “prohibits international organizations from receiving U.S. funding for contraception if they provide, counsel, refer or advocate for abortion services. The Rule prohibits these activities even if organizations carry them out with their own non-U.S. funding, and even if abortion is legal in their own country.”

The reinstated Trump policy retains abortion exceptions for rape, incest and life of the mother, according to PRI and other observers familiar with the history of the on-again, off-again Mexico City Policy.

The Mexico City Policy, re-enacted today on 'Day One' of President Trump’s term of office, demands that all non-US international organisations in receipt of US Government funding neither perform nor ‘actively promote’ abortion. This effectively means NGOs forfeit all US aid if they so much as tell a woman abortion is a legal option in her country, refer her to another provider or advocate for abortion rights with their own alternative resources.

According to the organization’s financial statement, Marie Stopes received $1.6 million in non-UK and non-Australian “grants” funding in 2014, and $1.5 million in such grants for 2013. But those are classified as “other overseas” funding and do not reveal how much comes from the U.S. government.

Mosher, who sits on Trump’s Catholic Advisory Committee, said part of the reason the new president is bolder than other GOP leaders is that “he’s not afraid of anything,” including the media.

“These are exciting times,” he said. “Trump is going to govern as Trump. Who can get to him?”

Other pro-life advocates celebrated the quick action by President Trump to protect human life abroad, and set their sights on further pro-life reforms under the new administration, after an eight-year draught of abortion-affirming policies under Obama.

“Almost immediately, the Trump administration set to work building a different kind of wall: the one between taxpayers and abortion-on-demand,” said Tony Perkins, president of the Family Research Council, based in Washington, D.C.

Perkins highlighted White House spokesman Sean Spicer’s strong pro-life remarks in his first press briefing. “Not only does this help tear down the financial stronghold that groups like Planned Parenthood have on other nations, but it also sends a message to the world that America recognizes that all human beings have inherent worth and dignity.”