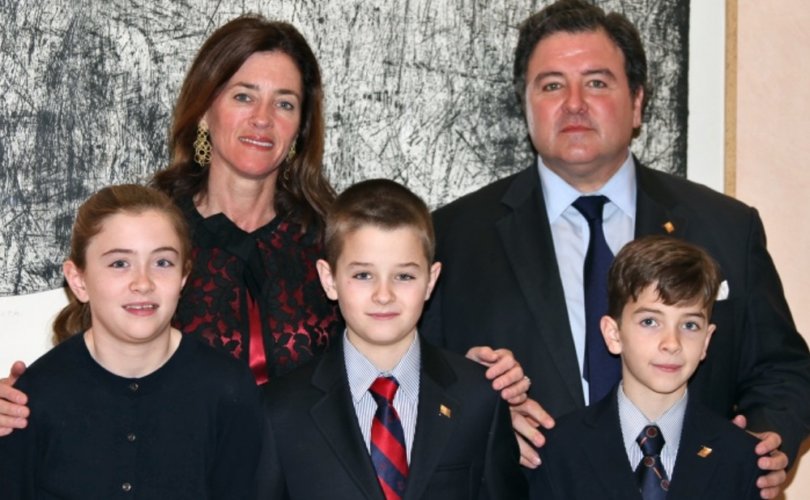 MADRID, January 3, 2018 (LifeSiteNews) – The Trump Administration recently installed a new Ambassador to Spain. The former Obama appointee who was a pro-LGBT openly gay man ‘married’ to a man was replaced with a family man who has a wife and three children.

Juan María Piñero of Spain’s Actuall.com reports that Trump’s new Ambassador to Spain signals that the U.S. president has “cut” with Obama’s plans to “impose the LGBT agenda in the world through diplomatic pressures.”

When the Obama’s vacated the White House in January 2017, their first stop was at the Palm Springs home of Costos and Smith where they spent a few days before leaving the country for a ten day stay in the British Virgin Islands.

In June 2015, Costos was one of seven “openly lesbian, gay, bisexual, transgender, and intersex U.S. Ambassadors” issuing a joint letter explaining “how proposed trade agreements will export our values of equality and tolerance.” The eighth signatory was Randy Berry, Obama’s Special Envoy for the Human Rights of LGBTI Persons.

The letter can be found in the Obama White House archives.

The document points out how the Obama administration, in conjunction with the entire State Department, sought to use trade policy and other measures to strong-arm other countries into accepting the importation of LGBT ideology.  The Obama-led efforts shocked developing nations, particularly in Africa and the Caribbean, where efforts to import same-sex marriage and transgenderism were met with resistance and repudiation.

The LGBT Ambassadors’ statement read in part, “We are proud to be part of an Administration that remains deeply committed to the advancement of human rights for all, including LGBTI persons … The Administration has backed up those words with actions, including through the issuance of a Presidential Memorandum to advance the human rights of LGBTI persons worldwide. This commitment is also clear in trade priorities like TPP, which would represent a significant expansion of enforceable labor rights, and would support the elimination of discrimination with respect to employment.”

“We are committed to working closely with the White House to ensure that any trade arrangement approved by Congress is a force for progress on human rights for everyone, including for LGBTI persons,” the letter continued, ending with a claim that they represent and are working for “American values.”

“At the State Department, we’re committed to helping our families — all of our families,” said Deputy Secretary of State for Management and Resources Heather Higginbottom at a State Department event kicking off “Pride Month” in Washington, DC, two days before the issuance of the letter.

“We don’t have gay spouses, we have spouses,” continued Higginbottom.  “We don’t have lesbian families, we have families. And we refuse to accept that equal treatment by our foreign counterparts is too much to ask.”

Richard Duke Buchan III, the new U.S. Ambassador to the Kingdom of Spain and the Principality of Andorra, is the Founder (2001) and CEO of Hunter Global Investors L.P., based in Palm Beach, FL.  Buchan arrived with his family in Madrid one week before Christmas to assume his new role heading the Embassy there.

“Mr. Buchan grew up on a working farm in rural North Carolina,” according to his State Department biography.  “He, his wife and their children continue family traditions and manage a farm that grows over 60 varieties of organic, heirloom tomatoes and other vegetables. They run a farm stand, develop new varieties of tomatoes and donate fresh produce to local charities.”

“Ambassador Buchan has had strong ties to Spain for almost 40 years,” reports the U.S. Embassy in Madrid.  “He studied at universities in Valencia and Seville and has travelled extensively throughout the country. A longtime supporter of international education and study of the Spanish language and culture, Ambassador Buchan and his family established a successful exchange program between students in Spain and the United States.”