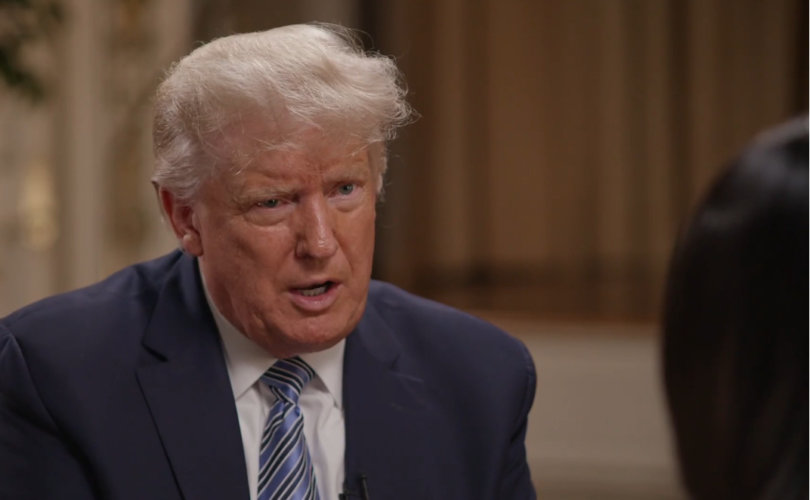 PALM BEACH, Florida (LifeSiteNews) — Former President Donald Trump passionately defended the experimental COVID-19 shots in an interview Wednesday, claiming that their creation during his tenure is “one of the greatest achievements of mankind.”

In a wide-ranging 30-minute interview with The Daily Wire’s Candace Owens, Trump touched on a number of subjects, including the events of January 6, the 2020 presidential election, face masks, and the COVID shots.

Donald Trump: ‘The Vaccine is one of the greatest achievements of mankind’ ‘All three vaccines (Pfizer, Moderna, J&J) are very good’ ‘The vaccines work – If you take the vaccine you are protected’ ‘People aren’t dying when they take the vaccine’ pic.twitter.com/fU8q1sdMda

After acknowledging that Trump has been a strong supporter of the jabs from the very beginning, Owens asked the former president about his stance on mandating their use, explaining that what once was a free option has now become a matter of losing employment for many people, including military personnel.

The former president stated his opposition to legally requiring reception of the jab, telling Owens to “forget about the mandates. People have to have their freedom.”

However, he quickly turned his attention to the shots themselves, defending their rapid development and deployment as “one of the greatest achievements of mankind.” He said the country would have suffered a similar fate to what was seen during the 1917 Spanish Flu epidemic, which he said killed approximately 100 million people and “ended the First World War.”

The president continued to boast about the timeframe in which the shots were developed, saying he “came up with three vaccines [Johnson & Johnson, Moderna, Pfizer], all are very, very good. I came up with three of them in less than nine months; it was supposed to take 5–12 years.”

Owens emphasized that “more people have died under COVID this year … under Joe Biden than under you, but more people took the vaccine this year,” calling into question the effectiveness of the jab.

“No,” replied Trump, “the vaccines work but some people aren’t taking them. The ones that get very sick and go to the hospital are the ones that don’t take the vaccine, but it’s still their choice.”

Trump said that he respects “somebody not wanting to take” the jab, giving special mention to those who object on religious grounds, but insisted that he is “so proud of what we did with the vaccine, but it shouldn’t be mandated.”

Although recognizing that “the mandates are killing our economy” and that “people can’t go to work … because of the mandate,” Trump refused to criticize the shots, instead opting to encourage uptake.

“I’m a big fan of the vaccine. I’m not going to give that up. Millions and millions of lives I’ve saved.”

Contrary to the former president’s assertions, data from the U.K. suggests that the jabs have not contributed to ending the spread of COVID-19. Neither have the jabs proved to significantly improve one’s chances of reducing hospitalization, but the measurement of success is in preventing severe symptoms of the virus. Moreover, there is strong evidence that the “vaccinated” are just as likely to carry and transmit the virus as the unvaccinated.

In addition, data from Japan shows that young people are actually at a seven-times greater risk of death from taking the shot than they are of suffering death with COVID.

Furthermore, so-called “breakthrough infections,” in which a “fully vaccinated” person contracts the virus, are on the rise in both the U.S. and elsewhere.

Still, Trump insisted that “if you take the vaccine, you’re protected. The results of the vaccine are very good, and if you do get it [the virus], it’s a very minor form.” He added that those who do take it, “are essentially immune [to COVID],” and “won’t catch it a second time. It’s a very strong form of immunity.”

“People aren’t dying when they take the vaccine,” he added, despite more than 20,000 people in the U.S. alone reported to have died after taking the COVID shots.

In an interview with veteran broadcaster Bill O’Reilly on Sunday, Trump again credited himself for the development of the COVID jabs and revealed that he received a booster shot, receiving boos from members of the crowd.