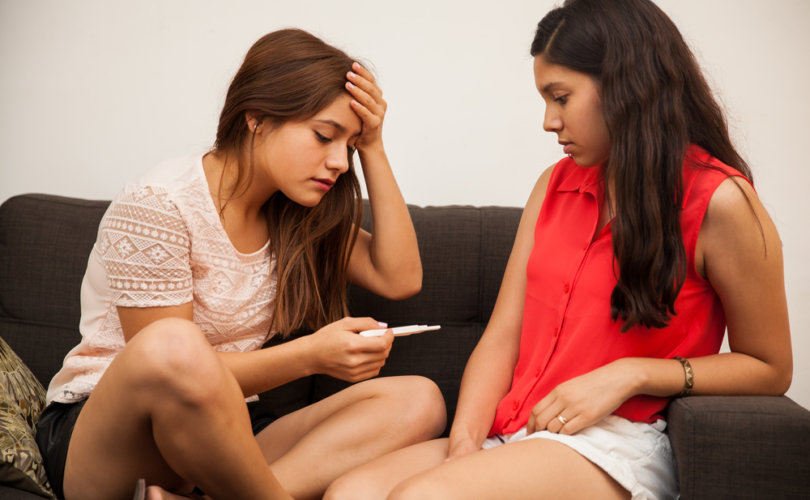 Under the Obama administration, Congress decided in 2010 to allocate $100 million a year in grants to contraception-based Teen Pregnancy Prevention programs (TPP). In 2017, all funding for abstinence education was eliminated from the budget.

But the Trump administration’s Department of Health and Human Services (HHS) noted that three grantees’ programs reported an increased likelihood that teens would become pregnant and, using the evidence, they recommended discontinuing the program in mid-2018.

“Given the very weak evidence of positive impact of these programs, the Trump administration … did not recommend continued funding for the TPP program,” an HHS press release stated.

Instead of funding programs that advocate abstinence under the Obama administration, TPP grantees promoted “safe sex” to adolescents between 10 and 19 years old. The tax-funded programs taught condom use and pushed kids to have LARCs (Long Acting Reversible Contraception) implants, abortifacient IUDs, and controversial chemical release implants.

Skeptics were repeatedly assured that programs would be closely evaluated for effectiveness in preventing teen pregnancy. Federal funding was only to go to programs that proved they were reducing teen pregnancies.

The evidence is in and the program is failing, according to the Teen Pregnancy Prevention Programs report by the U.S. Office of Adolescent Health.

Some organizations didn’t report findings, some admitted there was no difference in teen pregnancy rates, some reported improvements that quickly faded, and some showed increasing pregnancy rates.

Despite the government’s promise of “evidence-based” reporting, only 40 percent of grantees revealed the results of effectiveness analysis. Of those grantees continuing past programs, only four of more than 75 reported effective results, and those results were short-lived. Of the grantees trying “new” ideas, only eight of 27 showed the slightest effectiveness.

As pro-marriage and family advocates predicted, some reports showed their contraception programs resulting in increasing rates of sexual risk-taking among teens.

Planned Parenthood of the Northwest, which received $4 million, admitted their minor subjects were just as likely as any other teen to have sex without birth control. In fact, teen girls reported even higher rates of pregnancy than those without the program.

As soon as the HHS announced the Trump administration cuts, the mainstream media bellowed its disapproval.

National Organization for Women president Terry O’Neill told Healthline, “This is yet another anti-women policy that kills women.”

The Federalist noted that in the liberal media’s zeal to castigate Trump and defend promiscuity education, “No media outlet mentioned the ineffectiveness of teen pregnancy prevention programs, whether it was NPR, the St. Louis Post-Dispatch, Politico, Business Insider, The Independent, Forbes, Teen Vogue, or Bustle.”

The Washington Post quoted American Congress of Obstetricians and Gynecologists president Haywood Brown criticizing Trump. “It’s as though the evidence and the facts don’t matter,” Brown said without stating any of the reported “evidence and the facts” of programs’ ineffectiveness.

“We can also attribute these declines to the evidence-based teen pregnancy prevention programs,” Texas A&M’s Kelly Wilson told NPR, despite published proof to the contrary.

The report summaries can be found here and here. The Federalist offers brief notes on individual reports here.